Meeting Nelson Mandela on
his long walk to freedom 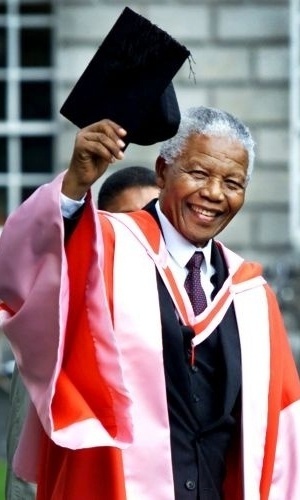 The death of Nelson Mandela this evening [5 December 2013] comes as South Africa prepares to mark 20 years of freedom. It is less than six months since I took part in the prayer vigil for Nelson Mandela in Christ Church Cathedral, Dublin, on 20 June.

Now, Madiba’s death tonight leaves a great vacuum when it comes to global political leaders with stature and moral integrity.

But, as world leaders line up to pay tribute to Madiba and queue for their tickets to fly to South Africa for his funeral, am I being a little too churlish or a little too early to ask: who were Nelson Mandela’s friends while he spent 27 years in jail for resisting racism and the oppressive apartheid regime?

While Mandela was still in prison on Robben Island, it was announced on 18 July 1988 that he was to receive the Freedom of the City of Dublin. On that day, a birthday party was held in his honour in Merrion Square. That evening, I was at the ‘Nelson Mandela Freedom at Seventy Concert’ organised by the Irish Anti-Apartheid Movement and presented by Doireann Ní Bhriain, Rodney Rice, BP Fallon and Pat Kenny.

Nelson Mandela was unable to come to Dublin. But in the following year, David Cameron, who was working in the policy unit at the Conservative Party Central Office, was able to go on an anti-sanctions “fact-finding” mission to South Africa in 1989 with a pro-apartheid lobby firm sponsored by PW Botha.

At the invitation of Christian Aid the South African Council of Churches, I travelled throughout South Africa and Namibia as an Irish Times journalist in January 1990 and left South Africa only days before Mandela was released from prison on 11 February 1990.

Within a few months of his release, Nelson Mandela was in Dublin in 1990 to personally accept his Freedom of the City.

That Sunday evening, 1 July 1990, I was honoured to be invited to be one of the patrons of the ‘Tribute to Nelson Mandela’ concert. That concert was presented by Doireann Ní Bhriain, Rodney Rice and Dave Fanning, and the line-up included the Chieftains, Christy Moore, Davy Spillane, Donal McCann, De Danaan, Mick Hanly and Dolores Keane, Mary Stokes and Davy Spillane. Winnie Mandela was the keynote speaker.

To mark Nelson Mandela’s first visit to Dublin, Louise Asmal edited a special Tribute to Nelson Mandela, which included a short biography of the ANC leader, contributions by the late Kader Asmal, who would later return to South Africa and become a Government minister, Fintan O’Toole of The Irish Times, and the former Senator Katharine Bulbulia. This publication by the Irish Anti-Apartheid Movement also included my own ‘Apartheid: Myth and Reality.’

I met Madiba again at his press conference in Dublin Castle before he left Dublin.

He was back in Dublin years later to receive an honorary degree at Trinity College Dublin, and I was surprised, as Foreign Desk Editor of The Irish Times, to be a special guest and to meet him at a lecture and dinner in the O’Reilly Hall in University College Dublin hosted by Dr Tony O’Reilly and Independent Newspapers.

I have campaigned and protested against racism and apartheid throughout my life. I have been on the picket line at Dunne’s Stores, I have been at the unveiling of the Mandela statue in Merrion Square, I have been on marches, protests and silent vigils, and I joined protests outside South Africa House in Trafalgar Square. These were constant topics in my writing when I was a journalist in The Irish Times.

Those of us who were persistent in these campaigns, and fired by moral outrage, often had to put up with critics who accused us of being hairy leftists and supporters of terrorists. 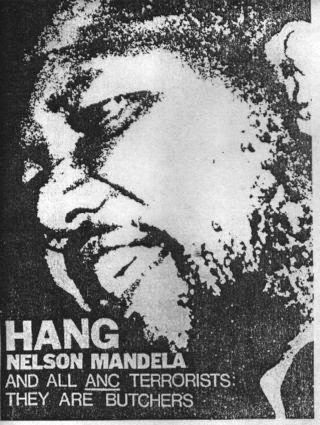 Over the next few days, I am sure that many of those people, including politicians, are going to jump on the Mandela bandwagon.

I was disturbed to read earlier this year that in 1985 David Cameron, now British Prime Minister, was a member of the Federation of Conservative Students when it produced the ‘Hang Mandela’ posters, pamphlets and badges.

In 1989, Cameron worked in the policy unit at the Conservative Party Central Office and went on an anti-sanctions “fact-finding” mission to South Africa with a pro-apartheid lobby firm sponsored by PW Botha. Should I remember this when he tells the world he was inspired by Madiba?

In April 2009, the London Independent reported that Cameron accepted an all-expenses paid trip to apartheid South Africa in 1989 while Mandela was still in prison. David Cameron’s visit to South Africa had very different flavour to mine a year later. At the time, Cameron was a promising young star in the Conservative Research Department. His visit to South Africa was organised and paid for by Strategy Network International (SNI), a firm that lobbied against imposing sanctions on the apartheid regime.

Cameron’s office has since insisted the visit was a “fact-finding mission” but he met no-one from the ANC, COSATU or the South African Council of Churches, who could have presented him with the facts on the ground. At the time, PW Botha was still in power, yet David Cameron’s boss at Conservative Central Office, Alistair Cooke, described this visit as “simply a jolly … a little treat, a perk of the job.”

The party leader at the time, Margaret Thatcher, described Mandela as “a terrorist.” Cameron’s colleagues who once wore ‘Hang Nelson Mandela’ badges as university students are now sitting on the front benches around him. 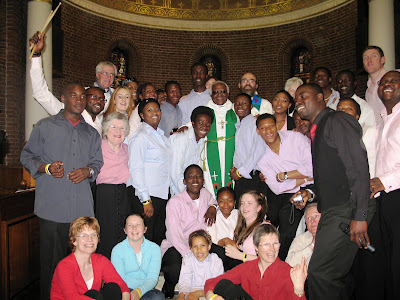 With Archbishop Desmond Tutu and the Discovery Choir in Saint George’s and Saint Thomas’s Church in Cathal Brugha Street, Dublin

I would prefer as “a little perk of the job” the opportunities I had to meet Nelson Mandela, Archbishop Desmond Tutu, Adelaide Tambo, Patrick Sekota, Archbishop Trevor Huddleston, John de Gruchy, Beyers Naudé, Alan Boesak, Frank Chikane, Joe Seremane, Cheryl Carolus, Donald Woods, members of the Sisulu family and the other people who campaigned tirelessly for an end to apartheid.

There were the campaigners on these islands too, including the Dunnes’ Stores strikers, Terence McCaughey, Gearoid Kilgallon, Louise Asmal, Tony ffrench, Maureen Eastwood, who travelled with me throughout South Africa. And the South African exiles, including Kader Asmal, Barney Pityana, Marius School and later Melanie Verwoerd.

Nelson Mandela once said of Marius Schoon: “He destroyed the myth that all Afrikaners were racists and oppressors.” The same tribute could be paid to Melanie Verwoerd.

There was a Thanksgiving Service in Saint Martin-in-the-Fields in London earlier this year [29 June 2013] for Archbishop Trevor Huddleston, marking the centenary of his birth on 15 June 1913. The service was organised by Action for Southern Africa (ACTSA), the successor organisation to the Anti-Apartheid Movement, and the Johannesburg-based Trevor Huddleston Memorial Centre, Sophiatown.

The service included tributes by Father Nicolas Stebbing of the Community of the Resurrection and Baroness (Glenys) Kinnock. A photographic exhibition, ‘Called to Justice and Freedom – Father Trevor Huddleston’, opened in the crypt in Saint Martin-in-the-Fields on 15 June and continued until 20 July 2013.

Nelson Mandela once said: “No white person has done more than Trevor Huddleston in the struggle against apartheid.” Archbishop Huddleston was a frequent preacher and campaigner on the steps of Saint Martin’s, close to the then South African Embassy.

Archbishop Huddleston guided and inspired thousands of people in Britain and beyond to campaign for democracy, dignity, equality and rights. It was he who gave Hugh Masekela his first trumpet. AS a young white priest, he made an influential impression on the then-young Desmond Tutu when he raised his hat in deference and greeting to Desmond Tutu’s mother. He died on 20 April 1998.

Art for Advent (5): ‘The Census at
Bethlehem’ by Pieter Bruegel the Elder

‘The Census at Bethlehem’ by Pieter Bruegel the Elder

This painting, also known as The Numbering at Bethlehem, depicts Joseph and the pregnant Mary making their way to Bethlehem:

In those days a decree went out from Emperor Augustus that all the world should be registered. This was the first registration and was taken while Quirinius was governor of Syria. All went to their own towns to be registered. Joseph also went from the town of Nazareth in Galilee to Judea, to the city of David called Bethlehem, because he was descended from the house and family of David. He went to be registered with Mary, to whom he was engaged and who was expecting a child (Luke 2: 1-5).

This is a rare subject in previous Netherlandish art. In this painting, Bruegel takes a Biblical story and treats a contemporary event, referring to political events of his day.

We can find allusions in this painting to the severity of the Spanish administration in the southern Netherlands in the mid-16th century. Bruegel may also be making a more general criticism of bureaucratic methods. The ruined castle in the background is based on the towers and gates of Amsterdam.

This is an oil-on-panel painting, painted by Pieter Bruegel the Elder, a Flemish renaissance artist, painter and print-maker in 1566.

Bruegel or Brueghel, who may have been born in Bruegel near the Dutch town of Breda, is known for his landscapes and peasant scenes. He was the father of Pieter Brueghel the Younger and Jan Brueghel the Elder and is the best known of the Brueghel dynasty of painters.

From 1559, he dropped the ‘h’ from his name, signing his paintings as Bruegel. He spent some time in France and Italy, and in 1551 he was accepted as a master in the painter’s guild in Antwerp eventually setting in Brussels.

He was nicknamed ‘Peasant Bruegel’ or ‘Bruegel the Peasant’ for allegedly dressing like a peasant and mingle with the crowds at celebrations to help him to get authentic details for his genre paintings.

He died in Brussels on 9 September 1569 and is buried in the Kapellekerk.

The painting was bought in 1902, and can be seen in Brussels in the Royal Museums of Fine Arts of Belgium.

Tomorrow: ‘The Feast of Saint Nicholas’ by Jan Steen.