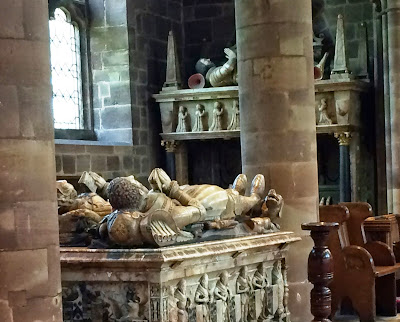 I am speaking on Saturday afternoon [1 November 2014] at the autumn conference of the Church of Ireland Historical Society in Christ Church Cathedral, Dublin, on ‘The Archbishops of Dublin and the Deanery of Penkridge: a mediaeval peculiar in the Diocese of Lichfield.’

Wandering around Penkridge Church on a summer’s day earlier this year, and as I gazed on the collection of Littleton family tombs, resplendent with squires, wives, children, heraldic arms and pet dogs, I was reminded of Philip Larkin’s poem, ‘An Arundel Tomb’:

Side by side, their faces blurred,
The earl and countess lie in stone,
Their proper habits vaguely shown
As jointed armour, stiffened pleat,
And that faint hint of the absurd–
The little dogs under their feet.

Such plainness of the pre-baroque
Hardly involves the eye, until
It meets his left hand gauntlet, still
Clasped empty in the other; and
One sees, with sharp tender shock,
His hand withdrawn, holding her hand.

They would not think to lie so long.
Such faithfulness in effigy
Was just a detail friends could see:
A sculptor’s sweet commissioned grace
Thrown off in helping to prolong
The Latin names around the base.

They would not guess how early in
Their supine stationary voyage
Their air would change to soundless damage,
Turn the old tenantry away;
How soon succeeding eyes begin
To look, not read. Rigidly they

Persisted, linked, through lengths and breadths
Of time. Snow fell, undated. Light
Each summer thronged the grass. A bright
Litter of birdcalls strewed the same
Bone-riddled ground. And up the paths
The endless altered people came,

Washing at their identity.
Now, helpless in the hollow of
An unarmorial age, a trough
Of smoke in slow suspended skeins
Above their scrap of history,
Only an attitude remains:

Time has transfigured them into
Untruth. The stone finality
They hardly meant has come to be
Their final blazon, and to prove
Our almost-instinct almost true:
What will survive of us is love.

Of course, Philip Larkin and his family lived for some time in Lichfield. Peter Young, Town Clerk of Lichfield, has spoken on a number of occasions – to Lichfield Discovered (2014), to Lichfield Speakers’ Corner Group (2012), and to Lichfield Civic Society (2008) – about Philip Larkin (1922-1985) and his associations with Lichfield.

Peter has been town clerk of Lichfield since 1987, and is only the 26th clerk of the City since 1583. He was a student at Hull University when Larkin was the Chief Librarian, and jokes that Larkin once said of Lichfield: “God this place is dull.”

Larkin was born in Coventry, the only son and younger child of Sydney and Eva Larkin. Sydney Larkin (1884-1948) was from Lichfield and his family’s long-standing associations with Lichfield date back to 1757. Some Larkin families lived at both No 21 and 49 Tamworth Street, Lichfield, and the family graves are in Saint Michael’s Churchyard.

Philip Larkin entered Saint John’s College, Oxford, in October 1940. Following the Coventry blitz in 1940, Sydney and Eva Larkin moved with their family to 33 Cherry Orchard, Lichfield, the family home of an aunt and uncle. Sydney Larkin continued to work in Coventry, while his wife Eva stayed in Lichfield.

However, the house was too small for all the Larkins, and Philip moved out to another house in Cherry Orchard. There he had a room to himself and regularly drank in the George. 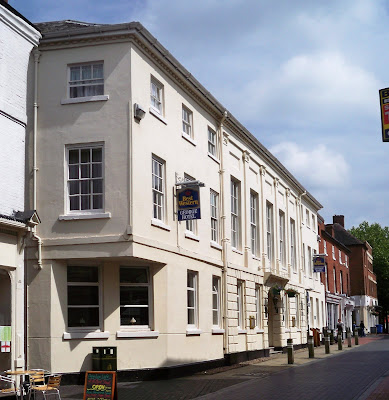 While he was in Lichfield, Larkin wrote three poems: ‘Christmas 1940,’ ‘Ghosts’ and ‘Out in the lane I pause,’ in which he described his walk into the centre of Lichfield one night.

‘Out in the lane I pause’ was written when he returned to Lichfield for a Christmas holiday in 1940. In this poem, he stands alone under a starless sky beside the railway bridge, contemplating the futures of the ‘Girls and their soldiers from the town’ whose steps he can hear on the steep road towards the shops. From his invisible vantage point, he contemplates the disappointments to come:

In his lectures, Peter Young suggested that Larkin may have referred to the Gazebo and the White Lady at the Swan in these poems.

After graduating in 1943, Larkin worked in libraries in Wellington, Shropshire, University College, Leicester, and for five years at Queen’s University, Belfast (1950-1955). From 1955, until his death in 1985 he was a librarian at Hull University. Shortly before his death he turned down the position of Poet Laureate following the death of John Betjeman in 1984.

In 1977, the ashes of Philip Larkin’s mother, Eva, were buried in Saint Michael’s Churchyard, Lichfield, and both Eva and Sydney are named on tablets among the raised stones, although the poet is buried at Cottingham, near Hull. 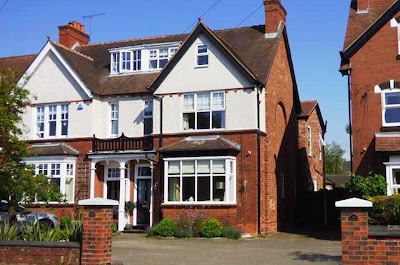 Posted by Patrick Comerford at 18:34 No comments: