Learning how there is more
to Greek wines than Retsina 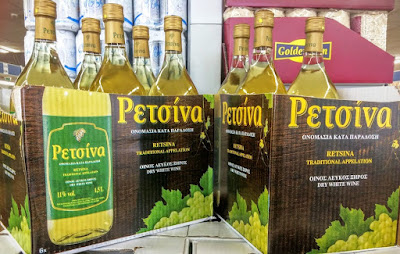 Retsina on sale in large quantities in a supermarket in Platanes ... but there’s more to Greek wines than Retsina (Photograph: Patrick Comerford, 2016)

I wonder whether the Lidl supermarkets in Greece ever have an Irish week.

My local Lidl supermarkets in Dublin regularly announce Greek weeks when a wide variety of Greek-made products are on special offer.

But while I was staying in Platanes, on the eastern edges of Rethymnon in Crete, throughout this month, I wondered whether the local Lidl ever offered an Irish week.

Walking around Lidl, Pavlakis and other local supermarkets, it was obvious that there was more to Greek wines than the limited Greek wines on special offer during those ‘Greek Weeks’ in Ireland.

Indeed, since I started to travel in Greece 30 years, there has been a very palpable increase in the quality of Greek wines.

Although it is an acquired taste that many are unwilling to spend the time or effort acquiring, I have acquired a taste for the best-known of all Greek wines, Restina. 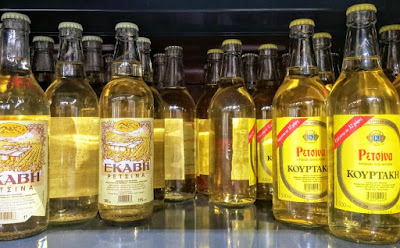 Retsina has been made in Greece for the last 2000 years or more (Photograph: Patrick Comerford, 2016)

Retsina (Ρετσίνα) is a resinated wine, usually white, and has been made in Greece for the last 2000 years or more. Its unique flavour is said to have originated from the practice of sealing wine vessels, particularly amphorae, with Aleppo Pine resin in ancient times. Before the invention of impermeable glass bottles, oxygen caused many wines to spoil within a year. Pine resin helped keep the air out, while at the same time infusing the wine with resin aroma.

There are popular stories in Greek folklore about the Romans plundering the wines of Greeks. In their anger, the Greeks turned to pine resin as a way of extending their store of wine and as a deterrent to their thirsty conquerors. The harsh flavour was said to put off the Romans, who refused to drink the bitter ferment.

The Romans began to use barrels in the third century AD, removing the need for using resin. But by then the flavour was so popular that the style has remained widespread ever since.

The earliest known mention of using resin with wine amphorae is by the first century Roman writer Columella. In his De Re Rustica, he described the different types of resin used to seal a container or mixed into the wine. However, he recommended that the very best wines should not be mixed with resin because of the unpleasant flavour that was introduced.

Pliny the Elder, in his Naturalis Historia, recommend adding resin to the fermenting wine must, and said the resin from mountainous areas had a better aroma than those that come from lower lands.

By the third century AD, however, barrel making was prevalent throughout the Roman Empire. However, the eastern regions of the Byzantine Empire continued to produce resinated wine long after it had ceased in the western empire.

During the Middle Ages, pilgrims and Crusaders to the Holy Land recorded their experiences of drinking Retsina in the Greek islands, although they described it as having an unpleasant odour. Other stories tell how an excess of undiluted Retsina was lethal for both King Eric I of Denmark and King Sigurd I of Norway.

Fine wines and fare in a shop in Rethymnon (Photograph: Patrick Comerford, 2016)

The EU treats the name Retsina as a protected designation of origin and traditional appellation for Greece and parts of Cyprus.

Modern Retsina is made following the same wine-making techniques of white wine or rosé with the exception of small pieces of Aleppo Pine resin added to the must during fermentation. The pieces stay mixed with the must, and produce an oily resin film on the liquid surface. At racking, the wine is clarified and the solids and surface film are removed from the finished wine.

Nowadays, it is easy to protect the new wine from oxidation with simpler means and less resin is used for Retsina than traditionally called for.

Local Retsina is produced throughout Greece, with major production centres in Attica, Boeotia and Euboea. Today the traditional grape for Retsina is Savatiano with Assyrtiko and Rhoditis sometimes blended in, as well as other grape varieties throughout Greece. On Rhodes, Athiri is the main grape. 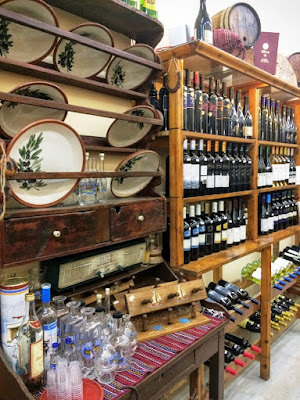 Greeks have been making wine for more than 6,500 years (Photograph: Patrick Comerford, 2016)

But there is more to Greek wines than Retsina. After all, Greece is one of the oldest wine-producing places in the world, with evidence of Greek wine dating back 6,500 years.

Historical evidence shows Greece is home to the second oldest known grape wine remnants and the world’s earliest evidence of crushed grapes. The spread of Greek civilisation and their worship of Dionysus, the god of wine, spread Dionysian cults throughout the Mediterranean from 1600 BC on.

Hippocrates readily prescribed wine for medicinal purposes, and Greek wines were well traded throughout the Mediterranean. The Ancient Greeks made wine in their colonies in Italy, Sicily, southern France and Spain.

Greek wine had high prestige in Italy during the days of Roman Empire. The best-known wines of ancient Greece included wines from Crete, Lesbos, Rhodes and Macedonia.

Later, in mediaeval times, wines from Crete, Monemvasia and other parts of Greece fetched high prices in northern Europe.

Inexplicably and suddenly, Retsina became the national drink in the 1960s. The rapid expansion of tourism then ensured Retsina was associated with Greece worldwide. 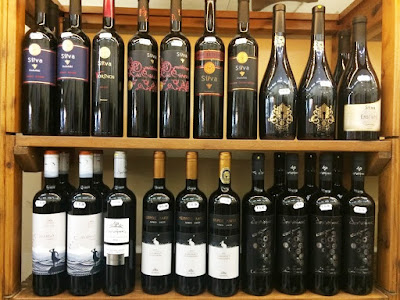 Greece’s first Cabernet Sauvignon vineyard was planted in 1963. In 1971 and 1972, legislation established appellation laws. A system of appellations was implemented to assure consumers the origins of their wine purchases, and the appellation system now categorises Greek wines as: 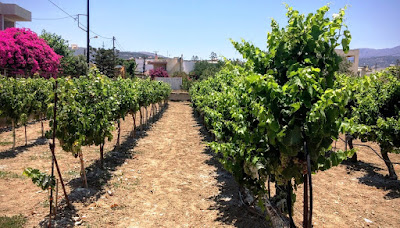 A small vineyard in a rural corner of Platanes near Rethymnon (Photograph: Patrick Comerford, 2016)

Wine growing can be found in the most surprising corners throughout rural Crete, but the main wine growing regions in Crete today are Archanes, Dafnes, Peza and Sitia.

The principal Greek grape varieties are:

● Agiorghitiko (‘Saint George’s grape’) is a variety native to Nemea that grows mainly in the Peloponnese, producing a soft, fruity red in many styles. Its sensory attributes are similar to Beaujolais Nouveau but, unlike its French counterpart, the Saint George ages well for about five years.
● Xinomavro (‘sour black’) is the predominant grape variety in Macedonia, centred on the town of Naousa. This variety has great aging potential with a palate reminiscent of tomatoes and olives, and a rich tannic character. It is often compared to Nebbiolo.
● Limnio, or Kalambaki is an important red grape variety that is indigenous to the island of Lemnos and has been used in red wine production for more than 2,000 years. As a varietal wine, Limnio is full-bodied, high in alcohol and very herbaceous, with a distinctive taste of bay leaves.
● Mandilaria, also known as amorgiano, is mainly cultivated on Rhodes and Crete. Wine from this grape is often very tannic and frequently blended with other grapes to soften the mouthfeel.
● Mavrodaphne, or ‘black laurel,’ is a variety that grows in the Peloponnese and the Ionian Islands. It is blended with the Black Corinth currant grape to produce a prized fortified dessert wine made in the Solera style.
● Kotsifali is a variety mainly grown on Crete. It is blended with Mandilaria or Syrah to enhance its colour.

A jug of white wine with Sunday lunch in the coastal village of Panormos last week (Photograph: Patrick Comerford, 2016)

● Assyrtiko is a multi-purpose variety which maintains its acidity as it ripens. It is similar in character to Riesling, and is mostly island-based, being a native variety of Santorini, whose old vines have been resistant to Phylloxera.
● Athiri is a lower acid variety and one of the most ancient. Originally from Santorini, it is now planted in Macedonia, Attica and Rhodes.
● Debina is a white Greek wine grape primarily in the Zitsa region of Epirus. The grape’s high acidity lends itself to sparkling wine production.
● Lagorthi is a variety mainly cultivated on high slopes in the Peloponnese. The grape produces a very fruity wine.
● Malagousia is a grape grown mainly in Macedonia, with a special aroma leading to elegant full bodied wines, with medium-plus acidity and exciting perfumed aromas.
● Moschofilero is a blanc de gris variety from the AOC region of Mantineia in Arcadia in the Peloponnese. Its wines offer a crisp and floral character in still and sparkling styles.
● Robola is most grown in the mountainous vineyards of Cephalonia. It has a smokey mineral and lemony character, and is an excellently complement for seafood.
● Roditis (the ‘pink’ or ‘rose’ grape) is very popular in Attica, Macedonia, Thessaly and the Peloponnese. This variety produces elegant, light white wines with citrus flavours.
● Savatiano (the ‘Saturday’ grape) is the predominant white grape in Attica, where it displays excellent heat resistance and shows a distinct floral and fruity aroma when cold fermentation is practised. When fermented without cooling, it makes Retsina or rustic unresinated wines that complement Mediterranean dishes.

Greek restaurants are good at recommending local wines, and many wine shops now offer regular wine-tasting evenings. If Greek wines remain underrated, the quality of Greek wines has improved dramatically since the 1980s, and as I found in these past few weeks they offer astounding quality for a reasonable cost. 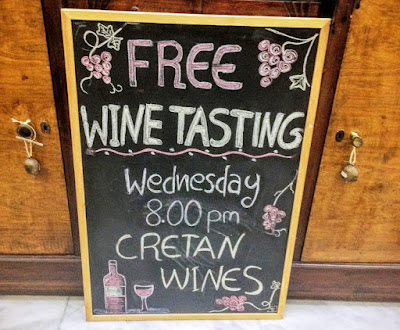 Wine-tastings are offered in many wine shops in Crete (Photograph: Patrick Comerford, 2016)