A note on this evening’s
Eucharist and hymns

The Samaritan Woman at the Well ... an icon in the Church of Aghios Nikolaos in Vathy on the Greek island of Samos (Photograph: Patrick Comerford)

I am presiding at the Community Eucharist in the Chapel of the Church of Ireland Theological Institute this evening (5 p.m., 26 March 2014). The readings, Collect and Post-Communion Prayer at this evening’s Eucharist are those for last Sunday (23 March 2014), the Third Sunday in Lent.

These photographs and these notes on the hymns are part of this evening’s service sheet.

Many of our hymns this evening reflect the themes in our readings, and the Gospel in particular.

Processional Hymn: ‘As the deer pants for the water’ (Irish Church Hymnal, 606), a praise song written by Martin Nystrom, is based on Psalm 42. Marty Nystrom says this song evolved during a time of personal worship, while he was playing the piano alone on the 19th day of a 21-day fast.

The tune Down Ampney by Ralph Vaughan Williams is named after the Cotswold village in Gloucestershire where he was born and where his father, the Revd Arthur Vaughan Williams, was the vicar.

Offertory: ‘Jesus, thou joy of loving hearts’ (425), includes the lines:

we drink of thee, the fountain-head
and thirst our souls from thee to fill.

This hymn, written in the 12th century by Saint Bernard of Clairvaux (Jesu dulcis memoria), was translated from Latin to English by the Congregationalist hymn writer, the Revd Dr Ray Palmer, and was published in his Poetical Works (New York: 1876).

Communion Hymn: As we receive Holy Communion, we sing ‘Jesus, remember me’ (617), by Jacques Berthier (1923-1994) and the Taizé Community. The words are based on the words of the penitent thief (Luke 23: 42), and so it is appropriate in Lent and may serve call to mind our discussion of the Jesus Prayer on Monday.

Canon John Peacey (1896-1971), who wrote this hymn, studied theology at Selwyn College, Cambridge, and was ordained priest in 1923. He was the Dean of Selwyn College, Cambridge, Principal of Bishop’s College, Calcutta, and Canon Residentiary of Bristol Cathedral. This hymn was published posthumously in 1975, and the Trinitarian fifth stanza was added by the editors of English Praise, a supplement to the English Hymnal.

The tune Magda was written by Vaughan Williams for his niece, Magdalene Fisher, for her marriage to Antony Macnaghten in 1926. The couple later lived near Bushmills, Co Antrim. 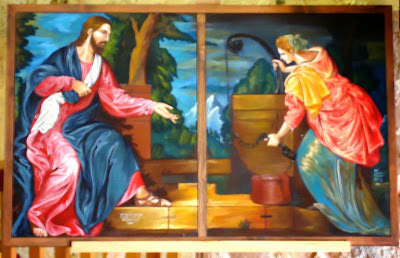 The Samaritan Woman at the Well ... a modern Greek icon in an exhibition in the Fortezza in Rethymnon, Crete (Photograph: Patrick Comerford, 2013)

Posted by Patrick Comerford at 13:03 No comments:

A copy of ‘The Icon not made by Hands’ or the ‘Mandylion’ (Photograph: Patrick Comerford, 2014)

I have a number of icons both at home and in my study. One of the icons at home, in a quiet corner of my bedroom, is this Romanian copy of what is known in the Orthodox tradition as ‘The Icon not made by Hands’ or the Mandylion.

According to Orthodox tradition, the ‘Image of Edessa’ – as it is also known – was a square or rectangle of cloth imprinted with a miraculous image of the face of the living Christ, which would make it the first icon. In the Eastern Orthodox tradition, it is often known as the Mandylion.

According to legend, King Abgar of Edessa (present-day Urfa in south-east Turkey, near the border of northern Syria) wrote to Christ, asking him to come to cure him of leprosy. King Abgar received a reply from Christ, declining the invitation. However, he says that when he has completed his earthly mission and has ascended, one of his disciples will visit the king and heal Abgar.

Later, it is said, the Apostle Thaddaeus or Jude came to Edessa, bearing the words of Christ, and by these words the king was miraculously healed.

Later legends say that when the successors of King Abgar reverted to paganism, the Bishop of Edessa placed the image inside a wall, and set a lamp before the image, sealing them behind the wall. The image was uncovered later on the night of a Persian attack, and saved the city from the Persians.

This legend was first recorded in the early 4th century by Eusebius of Caesarea in his History of the Church (1.13.5-1.13.22). Eusbeius says he transcribed and translated the actual letter in the Syriac chancery documents of the King of Edessa. However, he does not mention any image.

In the year 384, Egeria, a pilgrim from either Gaul or Spain, was given a personal tour by the Bishop of Edessa, who told her of many miracles that saved Edessa from the Persians. He gave her embellished transcripts of the correspondence between Christ and King Abgarus. She spent three days visiting every corner of Edessa and the surrounding area. However, her account makes no of any image or icon in Edessa.

The first reference to an image of Christ is found in a Syriac text, the Doctrine of Addai, ca 400. Addai is the Disciple Thaddeus, and the messenger is the painter Hannan or Ananias who paints the image and brings it back to King Abgar, who treasures it in his royal palace in Edessa.

The image is said to have resurfaced in 525, during a flood of the Daisan, a tributary stream of the Euphrates that passed by Edessa. This flood is mentioned in the writings of the court historian Procopius of Caesarea. During rebuilding work, a cloth bearing human facial features was discovered hidden in the wall above one of the city gates of Edessa.

Writing soon after the Persian siege of Edessa, led by the Emperor Chozroes I in 544, Procopius says that the text of Christ’s letter, by then including a promise that “no enemy would ever enter the city,” was inscribed over the city gate, but does not mention an image.

The first record of an icon like this comes half a century later from Evagrius Scholasticus, who writes in his Ecclesiastical History (593) about a portrait of Christ, which is of divine origin (θεότευκτος) and which miraculously helps the defence of Edessa during the Persian siege in 544.

The later, developed legend, says the painter was unable to capture Christ’s image because he was so dazzled by the light shining from his face. Instead, Christ wiped his face on a towel after washing himself and left an image behind.

So the legend develops from a letter, but without an image (Eusebius), to an image painted by a court painter (Addai), to a miraculously-created image supernaturally made when Christ presses a cloth to his wet face (Evagrius).

This last and latest stage of the legend became accepted in Eastern Orthodoxy, so that the ‘Image of Edessa’ was “created by God, and not produced by human hands.” This idea of an icon that was acheiropoietos (αχειροποίητος, “not-made-by-hand”) is a later enrichment of the original legend. I have come across similar accounts of supernatural origins for other Orthodox icons in Greece.

It is said the Holy Mandylion disappeared again after the Arab Sassanians conquered Edessa in 609. A local legend says conquering Muslims threw it into a well in what is today the city’s Great Mosque.

However, other accounts say the Image of Edessa was moved to Constantinople in the in 944, when Edessa was besieged by John Kourkouas and it was exchanged for a group of Muslim prisoners.

The Image of Edessa was received with great celebrations in Constantinople by Emperor Romanos I Lekapenos, and placed in the Church of the Most Holy Theotokos on 16 August. The earliest known Byzantine icon of the Mandylion or Holy Face dates from the following year, 945, and is in Saint Catherine’s Monastery on Mount Sinai.

It is said this icon repeatedly gave exact imprints of itself. One of these, ‘On Ceramic,’ was imprinted when Ananias hid the icon in a wall on his way to Edessa; another, imprinted on a cloak, ended up in Georgia.

The Image disappeared during the Sack of Constantinople in 1204 in the Fourth Crusade. It later reappeared in Paris as a relic belonging to King Louis IX in Sainte-Chapelle, Paris – not to be confused with the Sainte Chapelle at Chambéry, which housed the ‘Shroud of Turin’ for a time.

It has not been seen since the French Revolution, but some accounts claim the Mandylion of Edessa is now in the Pope’s private Matilda chapel in the Vatican.

The Eastern Orthodox Church feast of this icon is on 16 August (29 August New Style), and commemorates its translation from Edessa to Constantinople.

Apolytikion of the Holy Icon, Tone 2:

We venerate your most pure icon, loving Lord, as we ask pardon of our offences, Christ God. For by your own choice you were well-pleased to ascend the Cross in the flesh, to deliver from the slavery of the enemy those whom you had fashioned; therefore with thanksgiving we cry to you: You have filled all things with joy, our Saviour, by coming to save the world.