Exploring the history and legends of
Saint Flannans’ Cathedral, Killaloe 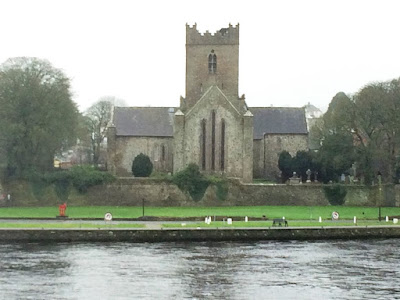 I stayed on in Killaloe on Sunday afternoon, after preaching at the Cathedral Eucharist in Saint Flannan’s Cathedral earlier in the day and accepted an invitation from Dean Gary Paulsen and an enthusiastic Bryan Brislane to tour the cathedral and to climb the tower for spectacular views along the River Shannon and across the surrounding countryside.

Saint Flannan’s Cathedral stands on Royal Parade in the centre of Killaloe, Co Clare, near the banks of the River Shannon and on the southern end of Lough Derg. This is one of the three cathedrals in the United Dioceses of Limerick and Killaloe. The Dean of Killaloe, the Very Revd Gary Paulsen, is also Dean of Kilfenora and both Dean and Provost of Kilmacduagh.

Saint Flannan’s Cathedral has been in continuous use since the 12th century, and the cathedral dates from the transition between the Romanesque and Gothic periods ca 1200. 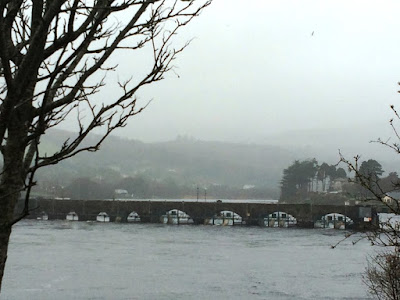 The bridge over the Shannon, linking Ballina in Co Tipperary and Killaloe in Co Clare (Photograph: Patrick Comerford, 2016)

However, the story of the Diocese of Killaloe predates the cathedral, and the story of Christianity in this area dates from a time long before modern diocesan boundaries were shaped.

Killaloe takes its name from Saint Molua (554-609), who is said to have founded a monastery here in the 6th century. But the cathedral is dedicated to Saint Flannan, a member of the same family as Donal Mor O’Brien, and reputedly the first Bishop of Killaloe in 639 AD.

The earlier monastic settlement founded by Saint Molua stood on a small island in the Shannon, about a half-mile downstream from the Killaloe-Ballina bridge. Later the monks moved to more spacious ground on the mainland. This monastic centre was called Cill Dálua (Killaloe), or the Church of Saint Lua.

Saint Molua was born in Ardagh, Co Limerick, where the parish church is called after him. On a visit to Munster, Saint Comhghall, Abbot of Bangor, found him asleep in a field where he was tending his father’s flocks. Recognising the boy’s holiness, he took him with him to Bangor. There he studied for the religious life and was ordained a priest.

Saint Molua is said to have founded monasteries in Ardagh, Co Limerick, at Killaloe, at Friars’ Island near Ardnacrusha, which was covered in 1930 by damming for the hydroelectric scheme, and at Cluain Fearta Molua (Kyle), north of Borris-in-Ossory, Co Laois, on the border of Leinster and Munster.

His successor, Saint Flannan, is said to have been the son of Turlough, King of Thomond. He was also Saint Molua’s nephew and his first disciple.

There is a story that one day, after he had been baking continuously for 36 hours, a heavenly light shone through the fingers of his left hand. It lit up the darkness to allow him to continue baking. On learning of this, Saint Molua decided to retire and appointed Saint Flannan as abbot in his place.

Saint Flannan was noted for his hospitality and the people of Thomond agreed that he should become their bishop. He is said to have visited Rome where he was consecrated bishop by Pope John IV (640-642).

The view of the River Shannon and the bridge from the tower of the cathedral (Photograph: Patrick Comerford, 2016)

However, a former diocesan historian, Father Ignatius Murphy, who died in 1993, discussed the abundance of legends about Saint Flannan. He dismissed the mediaeval life as historically valueless and said we have very little hard information about him. He argued that Saint Flannan lived in the eighth century, possibly in West Clare, and that the prominence given to him was due to family pride and propaganda on the part of the kings of the Dal gCais in the 11th and 12th centuries.

There is no mention of Killaloe in the Irish annals until an ambitious Brian Boru made it the capital of his kingdom in Co Clare. Whatever the historical truth, the new kingdom needed its own patron saint, and Saint Flannan emerged to fill this need.

The royal patronage of the O’Brien family ensured recognition of the new diocese at the Synod of Rath Breasail in 1111, with Máel Muire Ua Dúnáin as the first Bishop of Killaloe. To make the diocese viable it incorporated at least three, earlier separate dioceses that had been founded around three abbeys: Killaloe, under Saint Molua and Saint Flannan, Roscrea, founded by Saint Crónán, who died in 665, and Scattery Island (Inis Cathaigh), founded by Saint Senan. 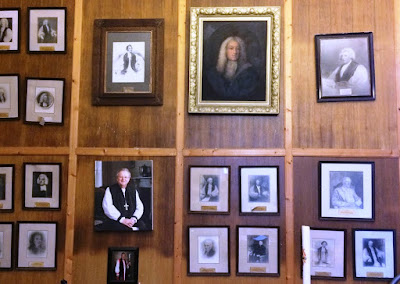 Portraits of former Bishops of Killaloe line the walls of the cathedral vestry (Photograph: Patrick Comerford, 2016) 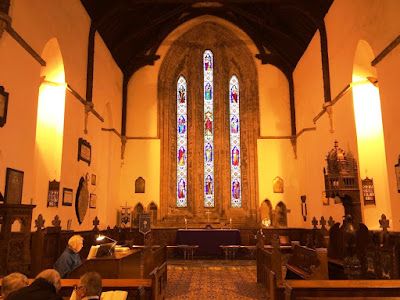 Killaloe Cathedral is a cruciform-shaped building, with an aisleless nave, transepts, chancel, and central tower. It is 47.7 metres long, 9.15 metres wide and 11.7 metres high.

The 11 metre high three-light East Window contains stained glass by Warrington of London and shows Christ surrounded by his 12 disciples. The window dates from 1865 and commemorates Ludlow Tonson, 3rd Lord Riversdale, a Victorian Bishop of Killaloe (1839-1861).

The chancel and the nave are divided by an elaborate Gothic oak screen, with a rose window, erected in 1885. The north transept is now used as the cathedral vestry on the ground floor, with the chapter house in the room above, and stairs that lead to the tower.

Until the 19th century, the South Transept was used as the Bishop’s Court, where pleas for marriage licences were heard and penalties for many offences were pronounced. The South Transept is screened off and is now used as a side chapel and on Sunday morning for coffee after the Cathedral Eucharist.

The features in the nave of the cathedral include the Romanesque doorway, the Kilfenora High Cross, a Rune Stone and a beautifully decorated stone font. 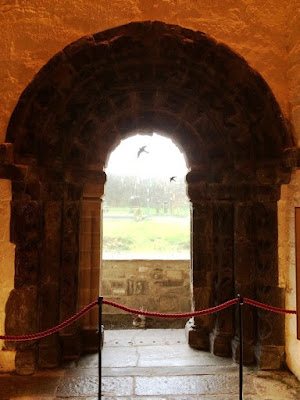 The Romanesque doorway in the south-west corner of the nave in Saint Flannan’s Cathedral (Photograph: Patrick Comerford, 2016)

The 12th century Romanesque doorway, with its richly decorated carvings, has been inserted in the south-west corner of the nave. The arch has four richly-carved orders decorated in a typical Romanesque style, with chevrons, beads, an array of animals with their tails wrapped around the hair of human heads, and fine honeysuckle ornaments. It has over 130 patterns of plants and animals, with two two alike.

There are two grave slabs at the base of this decorated doorway, reputedly marking the grave of Muircheartach O’Brien, King of Munster and self-declared High King of Ireland, who died on a pilgrimage to Killaloe in 1119. He was the great-grandson of Brian Boru, and the last of his descendants to be High King of Ireland. 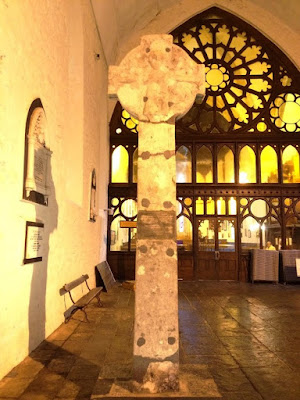 The imposing 12 ft-high 12th century High Cross was moved from Kilfenora in north-west Co Clare to Killaloe in 1821 by Bishop Richard Mant (1820-1823), an amateur archaeologist. The cross was embedded in the walls of the Gothic cathedral in the 1930s. It is free-standing once again and stands in the nave of the cathedral.

The small stone with inscriptions in Runes, a Scandinavian script, and Ogham, an old Gaelic form of lettering, was discovered 100 years ago in 1916 and dates from ca 1000. This is the only example in Ireland of a stone with both Runic and Ogham inscriptions. It may have been carved by a Viking who converted to Christianity. The Viking Runic inscription reads: Thorgrim carved this cross; the Ogham, which is on the side of the stone, reads: A blessing on Thorgrim. 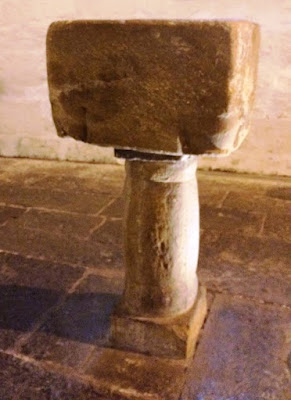 The rectangular stone font is elaborately decorated and dates from the 13th century. It is decorated with arabesque-style ornaments and on one side atypical cross and foliage design.

The font was originally a ‘table’ or ‘polypod’ font, and would have been mounted on five legs and a plinth. These are now lost, and the font was set on its present base in 1821 by Bishop Mant, at the same time as he brought Kilfenora High Cross to Killaloe. 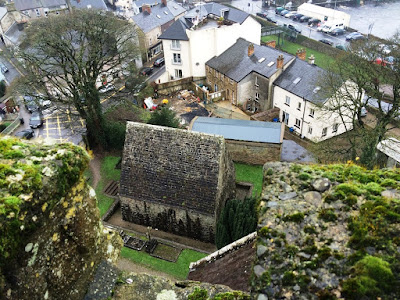 On the north side of the cathedral is a small 11th century oratory or chapel that predates the cathedral. Saint Flannan’s may have been the original sanctuary of the holy abbot. Its roof is very steep, and made entirely of stone. It has a belfry, and two doorways to the east and west.

The oratory is one of a small number of Irish churches with a stone roof and is possibly the oldest surviving church in Ireland built in the Romanesque style. 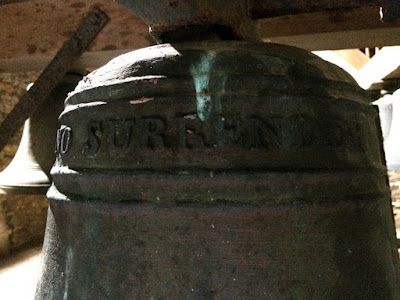 The ‘No Surrender’ bell in the cathedral tower (Photograph: Patrick Comerford, 2016)

The cathedral tower, which I climbed on Sunday afternoon with Bryan Brislane and Dean Paulsen, houses a chime of eight bells which are rung every Sunday and regularly throughoutthe week. The chime of bells was installed in 1869 and was cast by M. Byrne of Saint James’s Street, Dublin.

There is also a single call bell by Fogarty of Limerick, bearing the inscription ‘No Surrender.’

A £200,000 restoration project including the repair of the Romanesque doorway and the reconstruction of the Kilfenora High Cross, was completed in 2001.

The cathedral is normally open from about 9 am until 6 pm, or until dusk in winter. There are Sunday services at 11.30 am every week. The Holy Communion is celebrated on the second and third Wednesday of each month at 10.30 am, and on saints’ days. The bells are rung every Sunday, and tours of the tower are available by prior arrangement. 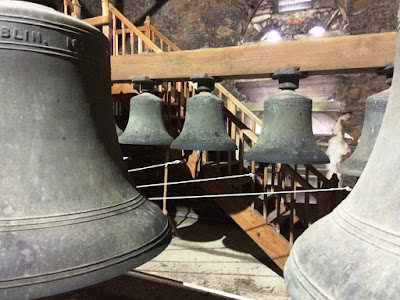 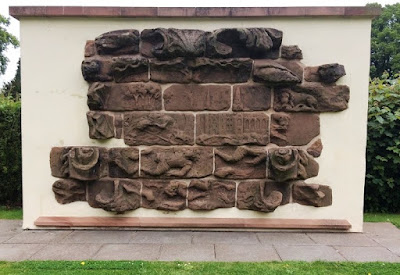 ‘We soon must lie down in the grave with the forgotten multitudes of former ages’ … the Martyrs’ Plaque in Lichfield, dating from the 1740s and now in Beacon Park (Photograph: Patrick Comerford, 2015)

Every period of life is obliged to borrow its happiness from the time to come. In youth we have nothing to entertain us, and in age we derive little from retrospect but hopeless sorrow. Yet the future likewise has its limits, which the imagination dreads to approach, but which we see to be not far distant. The loss of our friends and companions impresses hourly upon the necessity of our own departure; we know that the schemes of man are quickly at an end, that we soon must lie down in the grave with the forgotten multitudes of former ages, and yield our place to others, who, like us, shall be driven awhile by hope and fear about the surface of the earth, and then like us be lost in the shades of death. Beyond this termination of our material existence, we are therefore obliged to extend our hopes ...