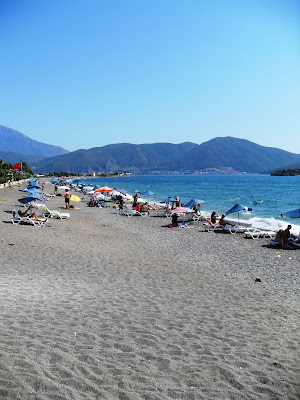 The beach at Çaliş stretches for 2 km (Photograph: Patrick Comerford, 2011)

I made a number of vain attempts to get to Rhodes this week. I have been there up to a dozen times in the past two or three decades, but this time I wanted to revisit the Jewish Quarter, including the Square of the Hebrew Martyrs and the Jewish Museum nearby, and to write about the colourful and tragic stories of the Jews of Rhodes.

But I never got there. The boat is not sailing on Sundays at the moment. And Monday’s booking was cancelled – I was told there were mechanical problems, and I was also told there were not enough bookings.

I tried to rebook for Tuesday. But the only sailing was in the afternoon, with a return sailing the next day. And that would have involved cancelling plans to visit the island of Kastellórizo, the most easterly of the Dodecanese Islands, and the most remote part of Greece.

And so I booked a tour of 12 islands around the bay and coastline near Fethiye for Tuesday, and then took a water taxi to Çaliş, a resort 5 km north of Fethiye. 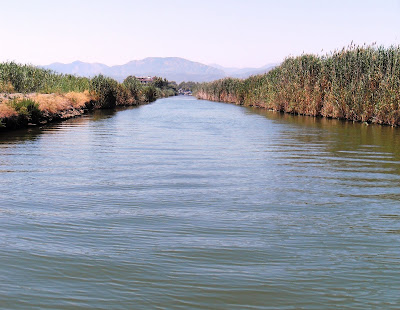 The canal leading from the Bay of Fethiye into Çaliş may not be Venice, but it is colourful (Photograph: Patrick Comerford, 2011)

The water taxi takes no longer than the journey by road on a dolmuş, first crosses the Bay of Fethiye, and then works its way up through a canal, lined by reed-filled marshes. This is not Venice, but I had memories of arriving by ferry from Venice in Torcello.

After lunch in Mangal, I crossed the canal by footbridge again, and walked down to the beach below Çaliş. This white, pebbly beach stretches for 2 km and looks out onto the Bay of Fethiye and its islands. Despite what the guidebooks, say the waters offered a refreshing opportunity for swimming, and the beach was a pleasure to stroll along.

The esplanade is lined with restaurants aimed at tourists, but they also seem to provide wonderful opportunities to watch the sunset in the evening. 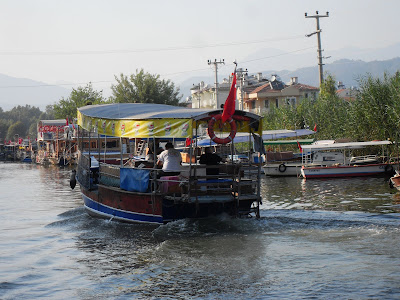 Heading back down the canal from Çaliş to Fethiye (Photograph: Patrick Comerford, 2011)

Instead, I headed back into Fethiye on the water taxi. Colourful boats plied their way up and down the canal, others were moored amid the rushes and marshes. The Fens of East Anglia and the canals of Birmingham and West Midland could not compare with this.

As the small boat approached Fethiye, there were breath-taking views of the Lycian rock tombs in the hills above the town, and of the castle built by the Knights of Rhodes on the ancient acropolis. From there, it was back to Ovacik. The sun had sent behind the mountains as I made my way up to Levessi (Kayaköy) for diner in Istanbul restaurant near Levissi.

Sunday morning in the churches of an Anatolian ‘ghost town’ 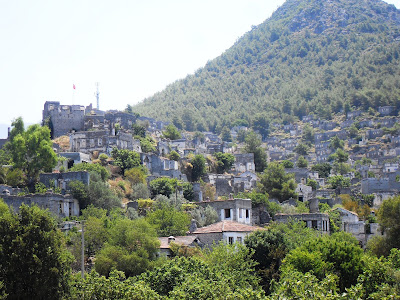 The villagers of Levessi were forced to abandon their homes in 1923 ... the ruins stand as witness to a sad time in the history of Europe (Patrick Comerford, 2011)

It was Sunday morning in the heat in south-west Turkey. There was nowhere to go to church, and so I took a taxi up into mountains above Ovacık and Hisarönü to pray in one of the many abandoned churches in the village of Levessi in the Kaya valley.

I first visited this village five years ago – but its haunting impact made it difficult to write about it, and it was another two years before I wrote about the tragic sequence of events that turned Levessi into a “ghost town.”

This had been a Greek-speaking village since antiquity, and was known to the Lycians, to the Greeks, and to the classical historian Strabo as Karmylassos (Καρμυλησσός). At the beginning of the last century, the people in this Anatolian mountain village were Christians but many were bilingual, speaking both Turkish and Greek. This was their home, and the home of their ancestors. No-one considered the modern Greek state as homeland, and although Rhodes is the nearest Greek island, at the time it too stood outside the modern Greek state, occupied by Italy from 1912 on.

The villagers of Levessi were forced to abandon their homes, their churches, their schools, their workshops, their shops and their factories in 1923, when the agreed “exchange of populations” between Turkey and Greece led to every Greek Orthodox villager being forced to leave for Greece – along with the few remaining Armenians, Jews and any other minorities who were neither Muslim nor Turkish-speaking.

About 500 houses from the original village are still standing – some turning to rubble, others still displaying hints of former elegance and grandeur, many with doors, floors, cisterns, fireplaces and chimneys still intact, some with peeling plaster, often with fig trees and weeds growing through the buildings.

It is possible to pick your way through the former streets and alleys, or to imagine yourself sitting in one of the squares, sitting in the summer sunshine, sipping coffee, watching the children play and listening to the Sunday bells of the churches. 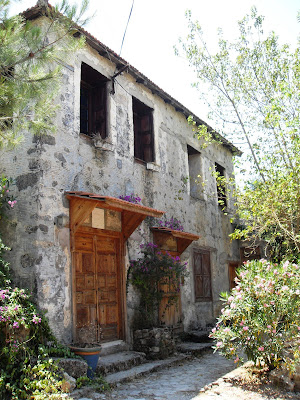 The occasional restoration points to the lost grandeur of these houses (Photograph: Patrick Comerford, 2011)

Here and there, I came across a house that has been restored to its former grandeur. But when the tourists slip away, this a lonely place, without the life and sounds it should rightly have echoing through its silent streets and squares. 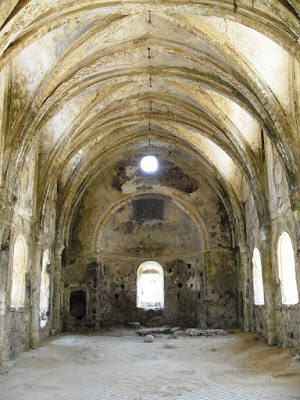 The interior of the Church of Taxiarches ... its frescoes, icons and other religious works have been vandalised and stripped out (Photograph: Patrick Comerford, 2011)

The maps point to the Church of Taxiarches (Ταξιάρχες, the Archangels Michael and Gabriel) as the “high church.” It stands atop a hill in the middle of the town, a five-bay church with barrel-vaulted ceilings, an apse and a narthex with a saddle-back roof.

The frescoes and icons have been stripped from the walls, the iconostasis has been removed, and the former pebble floor, made of black and white pebbles in mosaic pattern, has been lifted away.

But outside in the spacious courtyard it is easy to imagine the great ceremonies and liturgies that must have been celebrated here over the centuries.

Throughout the town, there are at least 14 other smaller churches. Some of these are tiny; some are collapsing under the weight of neglect of almost a century; in one, where the frescoes survive but are fading, the eyes have been gouged out of the saints, as if those who remained could not bear to have their protectors look down in judgment on them. 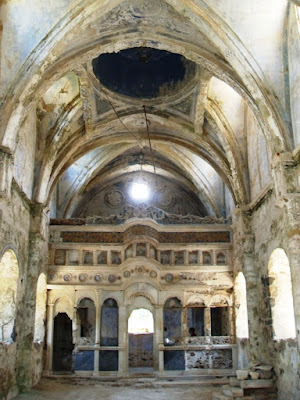 The interior of the Basilica of the Panayia Pirgiotissa (Photograph: Patrick Comerford, 2011)

Down at the end of the town stands the more recent Basilica of the Panayia Pirgiotissa (Παναγια Πυργιώτισσα), built as recently as 1888 – the date is still visible in the floor mosaic at the north-west door, and in the Greek inscription above. The floor of the church and the narthex at the west end are mosaics of black and white pebbles, laid out in typical Dodecanese patterns of grey and white pebble-work.

Inside, the church still has its marble-framed iconostasis – without its main icons at a lower level. But some of the icons survive at the top of the screen, including images of Christ and the 12 Disciples, the Transfiguration, the Entry into Jerusalem, the Last Supper, the Crucifixion, the Resurrection, the Easter appearance to Thomas and the Disciples, the Ascension and Pentecost.

But the frescoes have been scraped off the dome, the apse and the walls. If anything has survived or been preserved it is because it was white-washed over so that the church was used as a mosque until the 1960s. 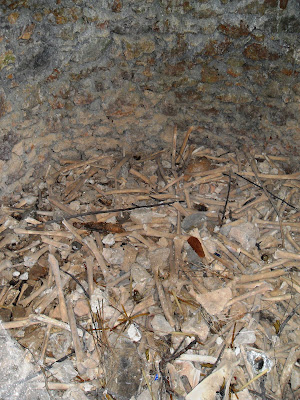 The remains of the dead in the charnal house beside the Basilica of the Panayia Pirgiotissa (Photograph: Patrick Comerford, 2011)

Outside the church, tucked away in one corner of the churchyard is the bell-tower, and in the other the charnel house, piled high with the skeletal remains of villagers. When they were forced to leave, the Christian villagers took the skulls of their parents and ancestors, leaving the rest of their bones behind.

Inside the church, we prayed our Sunday prayers in this hallowed place. For a few brief moments, this was a church again. With bread and wine from a local restaurant, we celebrated the Sunday Eucharist.

The sad fact is that – despite the war between Greece and Turkey between 1919 and 1922 – the people of Levessi had always been good neighbours to one another, with some exceptional cases of intermarriage. Their lives inspired Louis de Bernières in 2003 when he wrote Birds Without Wings, his prequel to Captain Corelli’s Mandolin, where the village of Levessi is thinly disguised as Eskibahçe.

Below Levessi, the modern Turkish village of Kayaköy looks like any other tranquil Aegean village – with its sleepy cafés where old men sit outside in the shade playing backgammon and sipping coffee.

Lunch in the Istanbul restaurant took longer than we expected. But the food and the attention were as good as you get anywhere in this part of the world. 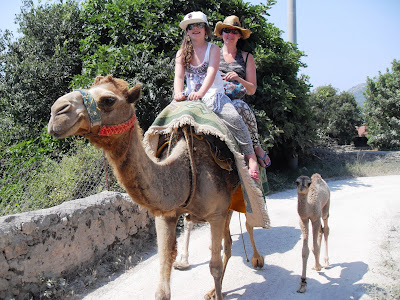 “Take my camel, dear,” said my Aunt Dot, as she climbed down from this animal on her return from High Mass (Photograph: Patrick Comerford, 2011)

Outside, some light bells jingling announced the arrival of two tourists on a pair of camels, accompanied by a baby camel. As they strolled by, I was reminded of Rose Macaulay’s account of the travels of the eccentric Aunt Dot (Dorothea ffoulkes-Corbett), Laurie, and Father Hugh Chantry-Pigg through Turkey on her camel and those opening lines in that very Anglican novel, The Towers of Trebizond:

“Take my camel, dear,” said my Aunt Dot, as she climbed down from this animal on her return from High Mass.