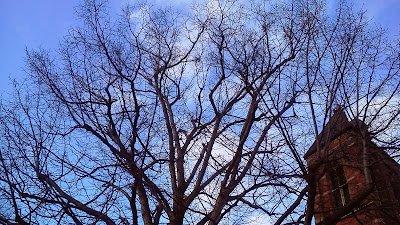 After this week’s conversations between the Church of Ireland and the Moravian Church concluded in Gracehill on Friday afternoon [31 January], Bishop John McDowell of Clogher celebrated the Eucharist according to the Book of Common Prayer (2004) in Gracehill Moravian Church.

Later that afternoon, I was in East Belfast for a meeting of the boards of the Anglican Mission agency Us (formerly USPG) in Saint Mark’s, Dundela, where Bishop McDowell was Rector before his election as a bishop.

I arrived in Dundela in time to enjoy the hospitality of the Revd Lynne Gibson, the curate of Saint Mark’s, who offered warm hospitality in the form of “Shipyard Strength” coffee – so appropriate for East Belfast – and my own personal guided tour of Saint Mark’s Church, the home parish of CS Lewis in his childhood. 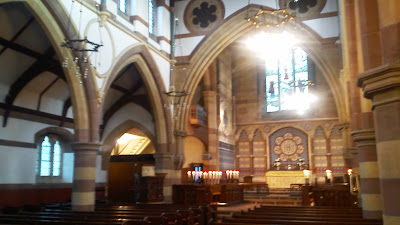 The tours and visitors have dwindled since the events last year to mark the fiftieth anniversary of the death of of CS Lewis, who died on 22 November 1963. Many parts of the church are now covered in cladding and scaffolding as major restorations are carried on. But the stillness and quiet of a late Friday afternoon provided an opportunity for a closer look at this church which is a gem not only because of its literary associations but as one of the great churches by William Butterfield (1814-1900).

For much of his life, Lewis did not like ritual and was not interested in churchmanship. While he attended the chapel in Magdalen College, Oxford, daily, he never attended Choral Evensong there and went to the early Sunday morning service in his local parish church. However, the literary historian Barry Spurr believes Lewis’s later friendship with TS Eliot influenced and reflected Lewis’s journey towards Catholic faith and practice within Anglicanism late in life: “Their friendliness seemed to exemplify Eliot’s theory in ‘Little Gidding’ about the resolution, under grace, of old antipathies.”

However, Saint Mark’s—like All Saints’, Margaret Street, London, and the Chapel of Keble College, Oxford – was designed by Butterfield as a church in the Tractarian tradition. Butterfield also designed the chapel of Saint Columba’s College, Rathfarnham, but Saint Mark’s is his only parish church in Ireland. The church building was consecrated on 22 August 1878, however only the nave and the tower were complete at that time. The work was completed to Butterfield’s design and consecrated on 4 July 1891.

Late last year, I had written a special feature for the Christmas edition of the US magazine Koinonia on CS Lewis. Now I had an opportunity for a private, first-hand glimpse of the early childhood influences and experiences that shaped the imagination of this Belfast-born writer.

CS Lewis (1893-1963) is known worldwide for great works that include Mere Christianity, The Chronicles of Narnia, The Screwtape Letters, The Four Loves and Surprised by Joy.

Clive Staples Lewis, known to his friends as Jack, was born in Belfast on 29 November 1898, the son of Albert James Lewis (1863-1929), a solicitor from Co Cork, and Flora Augusta (Hamilton) Lewis. He was baptised two months later, on 29 January 1899, in Saint Mark’s Church by his maternal grandfather, the Revd Thomas Hamilton, who was the first Rector of Dundela.

Saint Mark’s Church was designed by William Butterfield, an internationally-known architect of the Tractarian Movement; his work includes All Saints’ Church, Margaret Street, which has the tallest church spire in London, and Keble College. Oxford. The foundation stone was laid in 1876, and the church was consecrated in 1878. 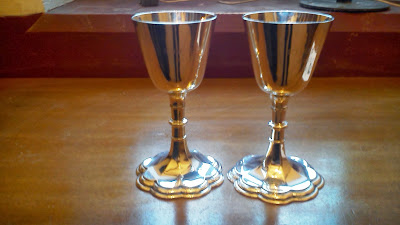 Arthur Lewis was a Churchwarden and the first Sunday School superintendent in Saint Mark’s, and presented the silver Holy Communion vessels still used in the parish. Flora Lewis’s family, the Hamiltons, were a well-known clerical family, with successive generations of priests back to the 1720s.

In 1929, at the age of 32, through the influence of JRR Tolkien and other friends, Lewis returned to the Anglicanism of his birth. In his rooms in Magdalen College, Oxford, he had been struggling with questions about faith, and he returned to Christianity in 1929. In Surprised by Joy, he writes:

“You must picture me alone in that room in Magdalen, night after night, feeling, whenever my mind lifted even for a second from my work, the steady, unrelenting approach of Him whom I so earnestly desired not to meet. That which I greatly feared had at last come upon me. In the Trinity Term of 1929 I gave in, and admitted that God was God, and knelt and prayed: perhaps, that night, the most dejected and reluctant convert in all England.”

For the rest of his life his faith exercised a lasting influence on his work. 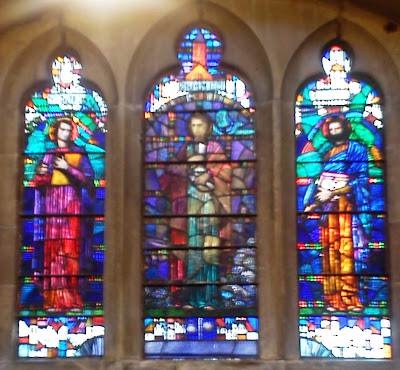 Albert Lewis died in 1929, and three years later in 1932 his sons, CS Lewis and Warren Lewis, presented a stained glass window to the church in Dundela in memory of their parents. The writer also presented the parish with a portrait of his grandfather, the first rector of the parish.

For many of us, The Lion, the Witch and the Wardrobe and The Chronicles of Narnia are so much part of the world of children that as adults we readily forget that CS Lewis was an important theological figure in the 20th century. Among theologians, Lewis is probably better known for his apologetic works, including Mere Christianity, The Problem of Pain and Miracles and The Four Loves. 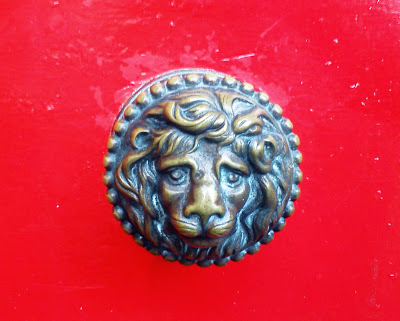 The Lion on the brass door-handle ... may have inspired a small boys lasting images of the Lion (Photograph: Patrick Comerford, 2014)

After showing me around Saint Mark’s Church, Lynne stopped at the former rectory, which had been the home of the Revd Thomas Hamilton, grandfather of CS Lewis, and pointed to embossed, brass lion on the door-handle. It is just high enough to meet the eyes of a small boy, and this, she said, was the lion’s image that inspired Aslan, the Lion of The Chronicles of Narnia and The Lion, the Witch and the Wardrobe. The Lion is the only character to appear in all seven books of the series, but a winged lion is also a traditional symbol of Saint Mark the Evangelist.

Stephen Dykes Bower, a consultant architect to Westminster Abbey, was commissioned to supervise restoration work in 1976, and observed at the time: “It is an outstanding example of Butterfield’s work ... and a fine specimen Butterfield attempting to re-create the Gothic grandeur of a medieval cathedral.”

The chevrons on the tiles lead from the font to the altar, pointing out the link between Baptism and the Eucharist. 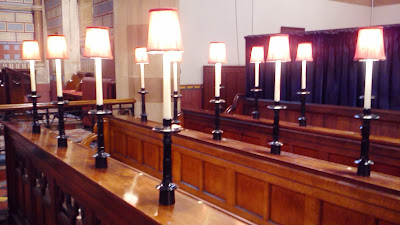 The mellowed lighting in the choir stalls reminded me that tomorrow [Sunday, 2 February 2014] is the Feast of the Presentation, Candlemas.

We later returned to the parish hall, the Heyn Memorial Hall at the corner of Sydenham Avenue and the Holywood Road, for the Us (USPG) meetings. The hall, built in 1928-1929, was designed by RH Gibson and Henry Seaver.

Paul Larmour in his illustrated architectural guide to Belfast, describes it as “one of the finest parish halls in the country.” It is built in Tudor style with red brick walls, green Norwegian slates, wood-panelled rooms, and timber-mullioned windows.

Upstairs, the youth room is known as the wardrobe and has a mural of Narnia recalling the associations of Saint Mark’s Parish with CS Lewis.

I returned to Dublin late on Friday night with a precious bag of that “shipyard-strength” coffee from East Belfast. 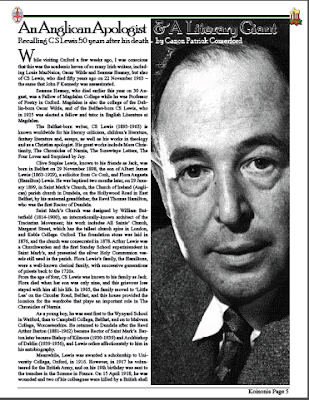 CS Lewis (1893-1963) … a jubilee feature in the Christmas edition of Koinonia celebrates the Christian apologist and Anglican literary giant of the 20th century, who died 50 years ago

A quiet reminder of peace
in the midst of the storm 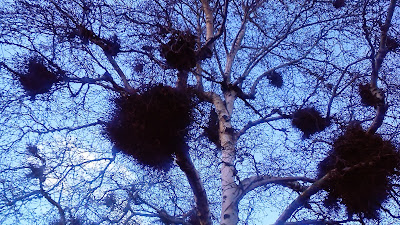 A blue sky above the trees on Crannagh Road, Rathfarnham, this afternoon (Photograph: Patrick Comerford, 2014)

Another strong storm is blowing across these islands, with bitterly cold, high winds and heavy rains.

The rains came down heavily this morning as I walked up Crannagh Road to Rathfarnham Quaker House for the funeral of David Poole, who died last Thursday [30 January 2014] in Sligo.

I first got to know David in Eustace Street Quaker Meeting after I moved from Wexford to Dublin in the mid-1970s. He was a committed ecumenist, who was equally at home in Quaker meetings and Methodist churches, and he gave many years of loyal service to the Irish Council of Church, the Dublin Council of Churches and the Irish School of Ecumenics.

He wrote one of the two references I needed to gain admittance as a student to the Irish School of Ecumenics in 1982, and later, after my graduation, we served together for some years on the Academic Council of ISE.

He was a vet by profession, yet as a Quaker he was disarmingly comfortable with mediating placidly and firmly in the most difficult theological discussions and contentions. He was a man of calm reason, good humour and common sense, with deep Christian faith, compassion and understanding.

The Quaker Meeting House at 6 Eustace Street was sold to the Irish Film Institute in 1987. The old Victorian-era main meeting room, with a gallery and a traditional elders’ bench, has since become Cinema 1; there I found myself in the midst of controversy when I chaired a meeting addressed by a visiting delegation from the Soviet Peace Committee and invited speakers who had been at Greenham to voice their support for a jailed peace activist, Olga Mevedkova. The Lecture Room, which was the venue for Sunday morning Meetings for Worship until the 1980s, is now Cinema 2; there I chaired the meeting in October 1979 that led to the refoundation of the Irish Campaign for Nuclear Disarmament (Irish CND).

Today, the space for Quaker meetings in 4/5 Eustace Street is small, and so this afternoon’s funeral took place in Rathfarnham Meeting House. A strong ecumenical presence could have been expected. But it must be an usual Quaker funeral to attract the presence of clergy from at least six churches: I counted them from the Church of Ireland, Roman Catholic, Romanian Orthodox, Methodist, Presbyterian and Lutheran churches, and there may have been more.

People spoke generously of David as an ecumenist, a peacemaker, a mentor, a mediator, a reconciler, but most of all as a man of deep Christian faith.

As Quakers might put it, it was good afterwards to meet so many friends and Friends from the past and present, and there were many stories about family members, campaigners from CND and other peace movements and other shared experiences so that it was like returning to a town I had once lived in or meeting a wide circle from an extended family.

It has been a week of ecumenical endeavours and reminders, with this week’s conversations with the Moravians in Gracehill, Co Antrim, and this afternoon’s funeral in Rathfarnham Quaker Meeting House.

Afterwards, two of us braved the storm that is still blowing across these islands, and drove from Rathfarnham to Greystones to walk along the beach and watch the storm coming with the swelling waves.

But the rain was coming down in intermittent but heavy showers, and we retreated to the Happy Pear for lunch before returning to south Dublin. 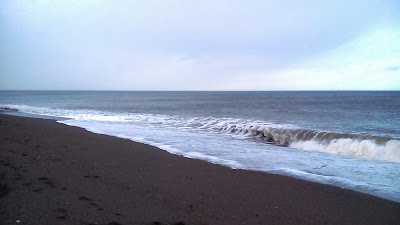 Calm before the storm? ... the waves roll in onto the beach at Greystones, Co Wicklow, this afternoon (Photograph: Patrick Comerford, 2014)

Posted by Patrick Comerford at 18:27 No comments: