I know it is still more than two months to go to Christmas, but already one of my photographs is being used on a Christmas card this year in New Zealand.

Ann L Gilroy, Editor of Tui Motu InterIslands Magazine, asked me last week could she use my photograph of an Ethiopian icon of the Visit of the Magi to illustrate the magazine’s Christmas card for this year.

I originally used the photograph on the Feast of the Epiphany, 6 January 2012, to illustrate a Christmas reflection on TS Eliot’s poem The Journey Of The Magi, part of a series of reflections on Christmas poems during the Christmas Season 2011-2012.

Tui Motu describes itself as an exciting and challenging journal. They invite readers to question, debate and reflect on spiritual and social issues in the light of Gospel values with the aim of creating a more just and peaceful society.

Tui Motu is a Maori phrase meaning “stitching the islands together...” bringing different races, faiths and opinions into relationship.

The magazine is based in New Zealand can be contacted at: PO Box 6404, Dunedin North 9059, New Zealand. 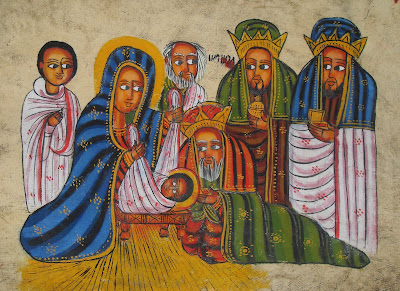