On the way to Africa through
Tarifa, the most southern
point in continental Europe 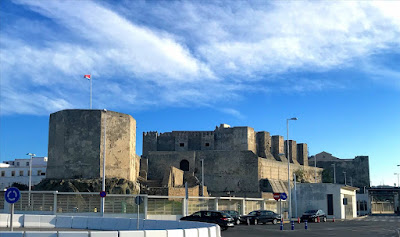 The Castle of Guzmán el Bueno dominates the port of Tarifa, the most southerly point on the continental landmass of Europe (Photograph: Patrick Comerford, 2018)

On my way to and from Tangiers yesterday, I travelled through the small port of Tarifa, on the southernmost coast of mainland Spain and continental Europe.

Tarifa features in Paulo Coehlo’s novel The Alchemist (1986), in which a shepherd boy visits Tarifa to meet an interpreter of dreams and ask him to interpret his recurrent dream. His life takes a dramatic turn when he meets an old king of Salem named Melchizedek in the city market place.

It was a 200 km bus journey from Seville, through the windfarms and the pueblos blancos of Andalucía, and passing Jerez and Cádiz on our way.

The windfarms north of Tarifa mean Spain has the world’s second-highest installed capacity of windpower, and the country aims to meet 20 per cent of its energy needs from renewable resources by 2020.

Jerez is the sherry producing capital of Spain, and these fortified wines have been produced by generations of Anglo-Andalucian families in their bodegas, giving us names such as Sandeman and Harvey.

The formal name of Jerez is Jerez de la Frontera, an ending for many of the villages and towns among the pueblos blanocs, close to the former frontiers with the Muslim world.

As our bus took us through the winding, white-washed streets of Tarfia, we could see we were on the way to North Africa. This is the last stop in Spain before Morocco, the last stop between Europe and Africa.

Tarfia is best known as one of the world’s most popular venues for wind sports. The town is on the Costa de la Luz (‘coast of light’) and across the Strait of Gibraltar facing Morocco.

The village of Bolonia near Tarifa was also populated in Roman times, when in was known as Baelo Claudia. The Emperor Claudius gave the place the status of a municipality, but it was effectively destroyed by an earthquake in the second century and abandoned in the sixth century. Some Roman ruins survive, including a theatre, a necropolis and several erect columns, as well as a statue of Trajan.

Tarifa is sometimes said to explain the origin of the word ‘tariff,’ as this was the first port in history to charge merchants for the use of its docks, but other sources point to the Arabic word ta'rïf, as the origin. Instead the name Tarifa is derived from the Berber commander, Tarif ibn Malik, who attacked the place in 710.

After the Islamic conquest of southern Spain, the city was fortified starting from the tenth century. Later Tarifa was held by the Muslim rulers of Algeciras (1031), by the rulers of Seville (1057), and by the Almoravids.

After the fall of the Almoravids, Tarifa was ruled again for a short period from Algeciras (1231), before becoming part of the Kingdom of Granada. In 1292 it was conquered by Sancho IV of Castile.

Legend says that when Guzmán el Bueno or Guzmán the Good was defending Tarfia and the fortress against the Moors, his son was taken hostage and he was told he would die if Guzmán did not surrender.

Laconically, Guzmán threw down his dagger to attackers, saying he would prefer to lose his son than to lose his honour.

He gives his name to the castle at the port, which incorporates the earlier fortress built by the Caliph Abd-ar-Rahman III and the Church of Saint Mary, built on the site of a former mosque. The town once had three gates, but only the Puerta de Jerez, dating from the 13th century, has survived.

Tarifa resisted further sieges by North African Islamic troops in 1294 and by Moroccan troops in 1340, eventually leading to the Battle of Río Salado.

The Church of Saint Matthew, built in Tarifa in the early 16th century in Gothic style, also stands on the site of a former mosque. The façade was redesigned by Torcuato Cayón de la Vega in 1774.

At the end of the 18th century, Tarifa was the childhood home briefly of Doña Josefa Eugenia Maria Francisca Comerford MacCrohon de Sales (1794-1865) until she was adopted by her uncle, Enrique Comerford, Conde de Bryas, and moved with him to Dublin.

During the Peninsular War in the early 19th century, when Spain and Britain were allies against Napoleon, Tarifa was besieged by French troops on 20 December 1810, and again on 18 December 1811. In both cases, the town was defended by British troops from Gibraltar.

Today, Tarifa’s unique wind conditions have made the beaches at Playa de Los Lances, Valdevaqueros and Punta Paloma the most popular in Europe with windsurfers and kitesurfers. The funnel created by the Strait of Gibraltar creates a Venturi effect when either the Viento de Levante or easterly wind from Africa or the Poniente or westerly wind from the Atlantic is blowing.

These two winds prevail in Tarifa for over 300 days in most years. This means Tarifa experiences exceptionally strong and consistent winds throughout the year, making it the windsurfing and kitesurfing capital of Europe. But instead we were taking the ferry from Tarifa to Tangiers. 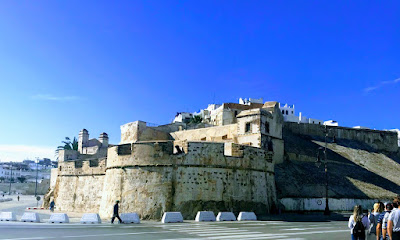 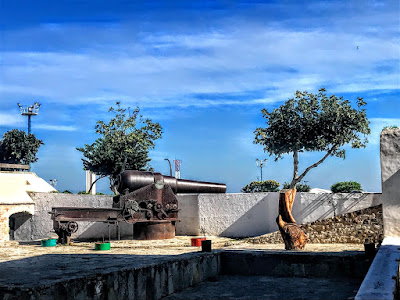 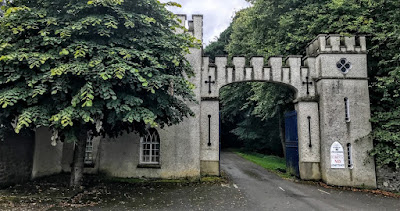