With the Saints in Lent (14), Saint Simeon the Myrrh-Streaming, 26 February 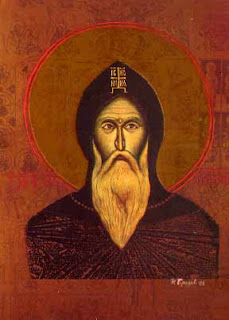 Saint Simeon the Myrrh-Streaming ... the ruler who abdicated to become a simple monk

Saint Simeon the Myrrh-Bearer who is commemorated today [26 February] in many calendars in the Orthodox Church, is an interesting example of a mediaeval ruler who resigned his throne and became a humble monk on Mount Athos.

As Stefan Nemanja (ca 1113-1199), he was the Grand Prince of Serbia (Rascia) from 1166 to 1196. He is remembered for his contributions to Serbian culture and history, as the founder of Serbia’s national church, and as founder of the powerful Serbian state that evolved into the Serbian Empire.

He was the father of Stefan Nemanjić, the first King of Serbia, and of Saint Sava, the first Archbishop of the Serbian Orthodox Church.

In 1196, he abdicated in favour of his son Stefan, and went to Mount Athos, where he became a monk and took the name of Simeon. Together with his son Saint Sava, Saint Simeon built Hilandar Monastery from 1198-1199. The monastery later became the cradle of the Serbian Orthodox Church. After his death, he was canonised by the Serbian Orthodox Church as Saint Simeon the Myrrh-Streaming after many reports of miracles following his death.

Stefan Nemanja was born ca 1113 in Ribnica, Zeta, near present-day Podgorica, the capital of Montenegro.

When he became an adult, Nemanja became Prince of Ibar, Toplica, Rasina and Reke after receiving the česti (parts of the state) from the Byzantine Emperor, Manuel I Komnenos. But in 1163, the Emperor installed Nemanja’s older brother Tihomir as Grand Župan of Rascia. Stefan had expected to succeed to the throne and was disappointed. But he ruled his territory independently and built monasteries until he was captured by his brothers and held in a cave. According to a popular myth, Saint George freed him from the cave.

Between 1166 and 1168, Prince Stefan rebelled against his older brother, deposed him and exiled him with his brothers, assumed the title of Grand Župan of All Serbia, and took the first name Stefan. He would attributed his rise to power to Saint George. He married a Serbian noblewoman, Ana, with they had three sons: Vukan, Stefan and Rastko.

But the Emperor Manuel soon imprisoned him and took him captive to Constantinople as a personal slave. When he was freed he was recognised as the rightful Grand Župans of the Rascian lands.

In the decade that followed, he strengthened Eastern Orthodox Christianity in his lands. and dealt strongly with the Bogomils, declaring them heretics, punishing them, burning their books, confiscating their lands, burning some at the stake, and exiling others.

Following the death of Emperor Manuel in 1180, Stefan Nemanja no longer considered he owed any allegiance to the Byzantines. He formed an alliance with King Bela III of Hungary and invaded Byzantine territory, pushing the Greeks out of the Valley of Morava, advancing as far as Sofia, and raiding Belgrade, Braničevo, Ravno, Niš and Sofia itself.

But the Hungarians soon withdrew from the war, leaving Nemanja’s forces isolated across western Bulgaria. In 1185, the Byzantines launched a counter-attack on Serbia, but the offensive was called-off but a Bulgarian uprising broke out.

During the Third Crusade, the Holy Roman Emperor, Friedrich, arrived on 27 July 1189 in Niš with 100,000 Crusaders, and was the guest of Stefan Nemanja. Although he was now in his early 70s, Stefan Nemanja followed the Crusaders with his army to the border at the Gate of Trajan. However, the alliance with the Crusaders collapsed when Friedrich signed a peace with the Byzantines on 14 February 1190 in Adrianopolis.

Stefan Nemanja introduced Orthodox Christianity in Zeta, bringing an end to the dominant Latin culture and language and the Catholic religion as the masses were forcibly converted to Eastern Orthodoxy.

In 1192, his son Rastko fled from his Monastery in Ston to Mount Athos, where he took monastic vows and accepted the name Sava.

On 25 March 1196, Stefan Nemanja abdicated in favour of his second son, Stefan, giving him all his earthly possessions. He then took monastic vows with his wife Ana in the Church of Saint Peter and Paul in Ras. He took the monastic name Simeon, and his wife took the name Anastasia. Simeon subsequently retired to Studenica Monastery, which he had founded, and Anastasia retired to the Monastery of the Mother of Christ in Kuršumlija. 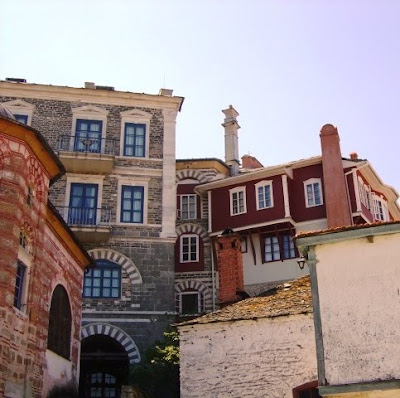 After many pleas from his son Sava, Simeon finally left Studenica for Mount Athos, where joined his son in 1197 in the Monastery of Vatopedi. In 1199, father and son rebuilt the Monastery of Hilandar on Mount Athos which had been given to the Serbian people by the Byzantine Emperor.

Saint Simeon died in front of his son Sava on 13 February (OS, 26 February NS 1199), in front of the icon of the Virgin Hodegetria. He was in his 86th year and was buried in the grounds of Hilandar. His last words were to ask Sava to take his remains to Serbia, “when God permits it, after a certain period of time.”

This how is Saint Sava described his father’s final hours:

All of us, looking and crying bitterly, saw on this blessed old man an inexpressibly heavenly providence and godly concern. For even here he asked from God and God gave him everything in his state; until this hour he did not want to be deprived of a single spiritual matter, and God granted him everything.

Verily, my dear brothers and fathers, that was a wonder to behold, that one before whom all foreigners and states feared and before whom they trembled looked like one of the strangers himself: poor, wrapped up in a cassock, lying on a rug on the earth with a stone below his head, bowing to everyone, causing pity and asking for forgiveness and blessing.

The night having come, they all took leave of him and blessed him and went to their cells to perform their duties and to rest a while. I and one priest (whom I kept with me) stayed with him all that night.

When midnight arrived, the blessed old man became quiet; he did not speak to me further.

When morning came and the church singing was resumed, the blessed old man’s face became immediately illuminated; and raising his hands to the sky, he said, ‘Praise ye the Lord. Praise God in his sanctuary; praise him in the firmament of his power.’

I asked him then, ‘Father, whom did you see?’

Having looked at me, he said then, ‘Praise him for his mighty acts; praise him according to his excellent greatness.’ When he had said that, his holy spirit left his body; and he fell asleep in God. I then fell on his face, weeping bitterly for a long time; and having stood up, I thanked God that I saw the last days of this very noble man.

According to tradition, holy oil or myrrh seeped from his tomb. His body is still said to give off “a sweet smell, like violets.” 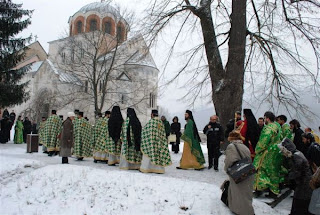 The Serbian Orthodox Church canonised him in 1200, and declared his feast-day on 26 February [Old Style 13 February].

In 1206, his son Sava brought his body to Rascia, and over his dead body his other two sons who were engaged in a blood-letting feud made their peace.

Saint Simeon was reburied in 1207 in the Studenica Monastery, which he had founded personally. Once again, it was said, holy oil seeped from his new grave. His son Sava, who became the first Serbian Archbishop, wrote the Liturgy of Saint Simeon in his honour.