There have been strong winds and heavy rains across the east coast since last night, and winter darkness seemed to take a grip on the day from late morning on.

But winter holds its own promise too, Advent begins tomorrow [29 November 2015] and Christmas Day is less than four weeks away.

I am preaching in Christ Church Cathedral at the Sung Eucharist at 11 a.m. tomorrow morning, and taking part in the Advent Procession at 5 p.m. tomorrow afternoon.

This afternoon, as dark descended, despite the cold and wet weather, I decided to go for a walk on the beach in Skerries and a walk around the harbour.

But first I went to the Olive, which still offers the best double espresso in Fingal. As I posted a photograph of my coffee on Facebook, it was a delight to get an immediate reply from a friend in Skerries: “Welcome home!”

Before going down to beach, I stopped in Gerry’s for the Skerries News, edited by David Diebold, The Economist and the New Statesman, good reading later for a cold winter evening on my own.

It was so dark on the beach it was difficult to see the sand beneath me or to see out to the shoreline and the waves, even though I could hear them in the distance. 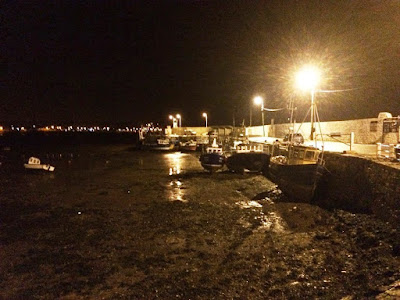 ‘Cast away the works of darkness’ … fishing boats in the harbour in Skerries this evening (Photograph: Patrick Comerford, 2015)

The Advent Collect, which we pray tomorrow morning, asks God to give us the grace “to cast away the works of darkness and to put on the armour of light” so that “we may rise to the life immortal.”

And as we light the first of the Advent candles on the Advent Wreath, we recall how the patriarchs were called “to live by the light of faith and to journey in the hope of your promised fulfilment. May we be obedient to your call and be ready and watchful to receive your Christ a lamp to our feet and a light to our path; for you are our light and our salvation.”

The theme of light continues at the Peace with the words of introduction: “In the tender mercy of our God, the dayspring from on high shall break upon us, to give light to those who dwell in darkness and in the shadow of death, and to guide our feet into the way of peace.”

Later, the words of the blessing are: “Christ the sun of righteousness shine upon you, scatter the darkness from your path, and make you ready to meet him when he comes in glory; and the blessing of God almighty, the Father, the Son and the Holy Spirit, be with you and remain with you always. Amen.”

Christmas lights are already decorating the trees on Strand Street in Skerries. As I headed home in the dark of the winter evening, I was looking forward to Advent Sunday, the Season of Advent and our preparation for the season of Christmas. 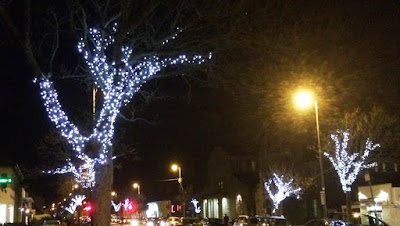 A photograph from Cambridge
for a new book in Bangladesh 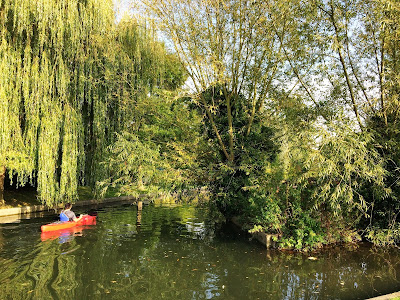 Robinson Crusoe Island is a tiny islet in Cambridge where the River Cam splits between Coe Fen and Sheep’s Green (Photograph: Patrick Comerford)

I am seldom happy about my photographs being used for commercial or political purposes, although I am happy to see them used by educational and faith-based organisations, even when I do share their approach or particular point of view.

It is also a pleasure when publishers ask for permission to use my photographs, although I always ask for an acknowledgement and also ask for a printed version if practicable.

Earlier this week I received a request from MetaKave Publications, a publishing house based in Dhaka, Bangladesh. The publishers are preparing a new book, Cambridge: Look Back in Love, by Professor M. Harunur Rashid, based on his memories of studying in Cambridge, where he studied in Fitzwilliam College.

He has been a Professor of English literature and language, a university administrator, a newspaper editor at the Dhaka Courier, and has translated modern poetry and prose in Bangladesh. He is also a noted writer on Sufism and Sufi literature and a commentator on social, political, and cultural life and literary texts.

The publishers want to use a photograph I took last year of Robinson Crusoe Island, a tiny islet in Cambridge where the River Cam splits between Coe Fen and Sheep’s Green.

I have visited Robinson Crusoe Island in Cambridge a number of times, and this photograph was taken on 9 September 2014 during an afternoon break while I was staying in Sidney Sussex College during the annual summer conference organised by the Institute for Orthodox Christian Studies (IOCS).

Robinson Crusoe Island is a tiny islet in the River Cam, between Coe Fen to the east and Sheep’s Green to the west, on a point on the river south of the weir where Scurdamore’s Punts are moored at Silver Street Bridge and immediately north of the Fen Causeway. 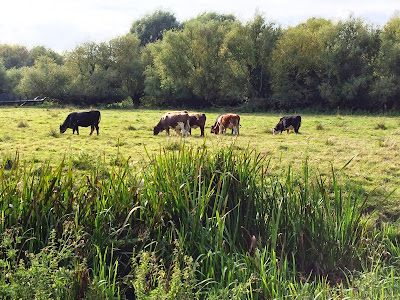 Coe Fen is known beyond Anglicanism as the name the tune composed by Ken Naylor for the hymn How shall I sing that majesty. Naylor was the music master at the Leys School, at the corner of Trumpington Street and the Fen Causeway, and named his tune after Coe Fen, the open space beside the school.

Coe Fen on the east bank of the Cam and Sheep’s Green on the west bank form a natural area that was once important for commercial activity in Cambridge. There was many watermills her, but because the land between the artificially raised banks of the watercourses was liable to flooding it was only suitable for grazing.

Cows grazed on one side of the river on Coe Fen and sheep on the other side, Sheep’s Green, and so they have been named.

By the 19th century, the Fen had become so marshy and boggy that it became necessary to drain it as a measure to prevent the outbreak and spread of diseases. A public subscription in 1833 raised £150 to drain the Fen, and later, in 1912-1914, the level of the Fen was raised by dumping rubbish on it.

On that late afternoon last year, I walked down Trumpington Street to the Leys School, and turned along the Fen Causeway. The Fen Causeway Bridge opened in 1926, and I am told it is sometimes called the Lesbian Bridge because of the graffiti sometimes written on its underside. Instead of checking this out, I joined a footpath south into Coe Fen, where the land is a semi-natural area and cattle still graze.

I walked south until the path meets Vicar’s Brook and then turned west and crossed a narrow bridge that took me onto Sheep’s Green, a small island formed by the way the river has split further north at the weir at Silver Street Bridge.

Sheep’s Green Bridge is a second narrow bridge that was rebuilt in 2006. Here pedestrians and cyclists jostle to give way to each other, and the bridge led me onto Lammas Land, a town park, with a small open air pool for children and a playground.

Lammas was observed on 1 August in England as a harvest festival when loaves of bread were made from the first ripe corn. Areas of green designated as Lammas lands in law were common land for nine months of the year, but passed to the sole use of their owners for the other three months on Lammas.

To the south of Lammas Land is the aptly-named Paradise, a nature reserve and woodland with a central marsh area, wet woodland and a number of riverside mature willows. 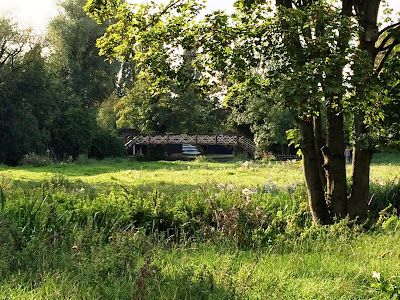 Crusoe Bridge, built in 1898-1899, is a steel footbridge with timber deck and supported on four cast-iron columns (Photograph: Patrick Comerford, 2014)

I walked back north along Lammas Land and walked east along the Fen Causeway for a brief distance, and then turned to the north side of Coe Fen, where I found the bridge that crosses Robinson Crusoe Island to my left or the west. 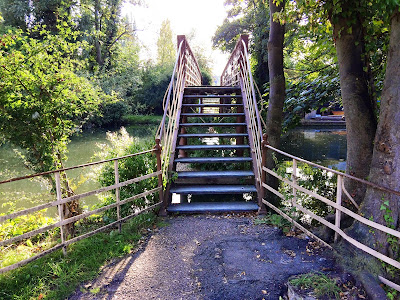 Crusoe Bridge, which was built in 1898-1899, is a steel footbridge with timber deck and supported on four cast-iron columns. This is the final bridge on the “Upper River” before it reaches the small weir at the mill pond.

Robinson Crusoe Island was once known as Swan’s Nest, but the present name has been in use for more than a century.

The land is deceptive in places here, and many apparently dry channels running through the grass are filled with marshy water, often filled with reeds and damp growth. These channels date back to the time when this area had many mills grinding corn for Cambridge. 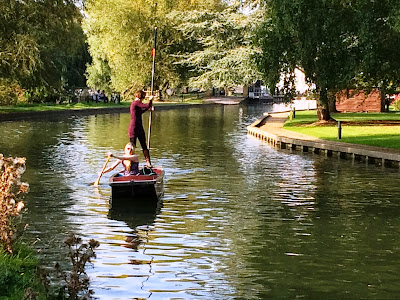 Punters on the river between Crusoe Bridge and the weir at Silver Street Bridge (Photograph: Patrick Comerford, 2014)

Coe Fen and Sheep’s Green are important thoroughfares for cyclists and pedestrians, particularly between the city centre and Newnham, and part of the pathway along the river out towards Grantchester runs through this space.

The river was still busy with tourists and punts that afternoon. I walked on north to the weir and stopped at the Anchor at Silver Street Bridge for a glass of wine. There I sat watching the bustle at the pubs and the punting station at Scudamore’s before returning to the bustle of academic life at Sidney Sussex College.