‘Flying a Kite’ at a winter
sunset in Bettystown 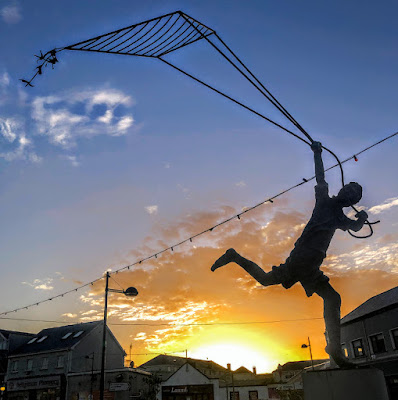 ‘Flying a Kite’ or ‘Boy with Kite’by Jarlath Daly is now a landmark in Bettystown, Co Meath (Photograph: Patrick Comerford)

During a recent walk on the beaches of Bettystown and Laytown in Co Meath, a slow, lingering winter sunset brought a new light to Jarlath Daly’s sculpture, ‘Flying a Kite,’ also known as ‘Boy with Kite.’

I have been familiar with this work for many years, but the setting sun cast it in a new light for me a few weeks ago.

The sculptor Jarlath Daly was commissioned by Meath County Council to create this work, which was unveiled by Councillor Tom Kelly on 16 July 2006. It is an imposing bronze figure that graces the main entrance to Bettystown Beach, where kite flying has become synonymous with the area.

It creates the image of a boy racing across the rooftops with his kite, and this sculpture has a sense of youth, timelessness and fun.

Jarlath Daly works in bronze and his sculptures reflect public attitudes, local themes, legends, history at both the local and the epic, and sport, and he is inspired by nature and childhood memories. His works range in scale from 10 inches to 30 feet. He also works with precious metals for jewellery-making.

Jarlath Daly was born in Tipperary in 1956. When he graduated from Limerick School of Art and Design, he became a teacher and taught at second level for two decades, gradually building up a portfolio of private commissions.

‘Flying a Kite’ is a whimsical art piece not to be missed when walking on the Co Meath coast. It is now a landmark in Bettystown and has become synonymous with Bettystown Square and the entrance to the beach. 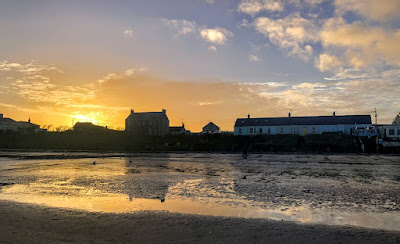 A slow, lingering sunset while walking on the beach at Relish in Bettystown, Co Meath (Photograph: Patrick Comerford) 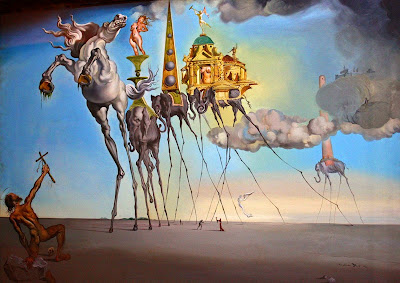 This looks like being a busy day, yet again. But, before this day gets busy, I am taking some time early this morning for prayer, reflection and reading.

Saint Anthony is the best-known of the Desert Fathers. He moved to the desert ca 270-271 and became known as both the father and founder of desert monasticism. The biography of Saint Anthony by Saint Athanasius of Alexandria helped to spread monasticism, particularly in Western Europe through Latin translations.

Sometime ca 270, Saint Anthony heard a Sunday sermon stating that perfection could be achieved by selling all one’s possessions, giving the proceeds to the poor, and following Christ (see Matthew 19: 21). He followed the advice and made the further step of moving deep into the desert to seek complete solitude.

Saint Anthony lived in a time of transition for Christianity. The Diocletian Persecution in 303 was the last great formal persecution of Christians in the Roman Empire. Ten years later, Christianity became legal in Egypt under Diocletian’s successor, Constantine I.

Those who left for the desert formed an alternative Christian society, at a time when it was no longer a risk to be a Christian. The solitude, austerity, and sacrifices of the desert were seen by Saint Anthony as an alternative to martyrdom, which was formerly seen by many Christians as the highest form of sacrifice.

By the time Saint Anthony died in 356, thousands of monks and nuns had followed his example by moving to live in the desert. His biographer, Saint Athanasius of Alexandria, wrote: ‘The desert had become a city.’

Desert monasticism appeared almost simultaneously in several areas, including Egypt and Syria. Saint Paul of Thebes is often credited with being the first hermit monk to go to the desert. He is also known as Saint Paul the First Hermit or Saint Paul the Anchorite.

Familiar stories from The Life of Saint Paul the First Hermit, written in Latin by Saint Jerome ca 375/376, include: the meeting of Saint Paul and Saint Anthony, the raven who brought them bread, Saint Anthony being sent to fetch the cloak given him by ‘Athanasius the Bishop’ to bury Saint Paul’s body, Saint Paul’s death before he returned, and the grave dug by lions.

So, Saint Paul of Thebes is known to posterity because Saint Anthony was told in a dream ca 342 about the older hermit and went into the Desert to find him.

Saint Jerome also tells the story of how these two Desert Fathers met when Saint Paul was aged 113. They conversed with each other for one day and one night.

The Synaxarium shows the saints inviting each other to bless and break the bread as a token of honour. Saint Paul held one side, putting the other side into the hands of Father Anthony, and soon the bread broke through the middle and each took his part.

When Saint Anthony next visited him, Saint Paul was dead. Saint Anthony clothed him in a tunic he was given by Saint Athanasius of Alexandria and buried him, with two lions helping to dig the grave. Saint Anthony returned to his monastery taking with him the robe woven with palm leaf. He honoured the robe so much that he only wore it twice a year, on Easter Day and the Day of Pentecost.

Over time, the model of Anthony and other hermits attracted many followers, who lived alone in the desert or in small groups. They chose a life of extreme asceticism, renouncing all the pleasures of the senses, rich food, baths, rest, and anything that made them comfortable. Thousands joined them in the desert, mostly men but also a handful of women. Religious seekers also began going to the desert seeking advice and counsel from the early Desert Fathers.

Saint Anthony of Egypt is commemorated in the Church Calendar on 17 January.

An image of Saint Anthony above the entrance to Saint Anthony’s Church in Mitropolis Square, Rethymnon (Photograph: Patrick Comerford, 2021)

The Prayer in the USPG Prayer Diary today (17 January 2022) invites us to pray at the beginning of the Week of Prayer for Christian Unity:

Today we pray for Christians across many churches, denominations and continents. May we work together to share the love of Jesus Christ with each other and with those who feel outside of the Church. 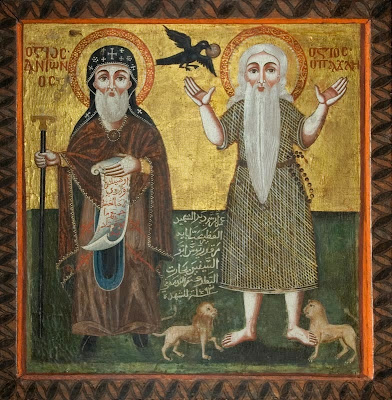