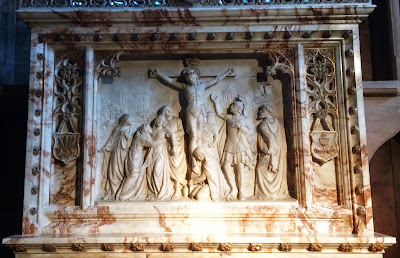 The crucifixion on the reredos of a side altar in Lichfield Cathedral … ‘Bryn Calfaria’ means ‘Mount Calvary,’ which makes the organ prelude by Vaughan Williams appropriate listening on this early morning in Lent (Photograph: Patrick Comerford, 2015)

Gray’s liturgical compositions are for Morning Prayer, Evening Prayer and Holy Communion in The Book of Common Prayer, including an Evening Service in F minor, a setting of Holy Communion in G, several anthems, including ‘What are these that glow from afar?’, and a collection of descants to various hymn tunes. He also composed a number of items for organ, for violin solo, and for voice and orchestra to religious and secular texts, including three choruses from Rupert Brooke’s 1914.

Vaughan Williams studied the organ under Gray at Trinity, and was regarded as one of his less talented students, although he also studied under Hubert Parry and Charles Villiers Stanford.

James Day tells how Gray once wrote to Sir Walter Parry for advice about his student, saying he could never trust Vaughan Williams to play a simple service for him without some dread as to what he might do, despite his considerable knowledge and taste on organ and music matters generally.

His mother’s cousin Henrietta ‘Etty’ Litchfield (1843-1927), a daughter of Charles Darwin, once wrote that the young Vaughan Williams “can’t play the simplest thing decently … They say it will simply break his heart if he is told that he is too bad to hope to make anything of it.”

Nevertheless, with Gray’s patient help, Vaughan Williams passed his exams to become a Fellow of the Royal College of Organists (FRCO) in 1898, and received his Doctorate in Music (MusD) at Cambridge the following year.

These three organ preludes are Vaughan Williams’s tribute as a grateful student to Alan Gray. As James Day says, “they bear witness to a gentle, patient and thoughtful man.” They may be modest pieces, but they are found in the repertoire of many churches, colleges and cathedrals.

The first of these preludes, ‘Bryn Calfaria,’ is based on the tune of that name by William Owen (1813-1893). This is the tune Vaughan Williams harmonised for the hymn ‘Lord enthroned in heavenly splendour’ in the English Hymnal in 1906 (No 319; see New English Hymnal, 296 ii), although in the Irish Church Hymnal it is used instead for ‘Hark! The voice of love and mercy’ (No 221).

William Owen began his working life at the age of 10 as a labourer in the Welsh slate quarries. He published his first hymn tune at the age of 18, and went on to publish a collection of his own hymns and anthems in the two-volume collection Y Perl Cerddorol (‘The Pearl of Music’) in 1852-1854. He conducted several choirs and was the Precentor or Choir Conductor at Caeathraw Chapel.

The tune ‘Bryn Calfaria’ was first published in the second volume of Y Perl Cerddorol in 1854, and was written for a Welsh hymn, ‘Gwaed dy Grfoes sy’n cody i fyny.’ It first appeared in an English collection of hymns in 1906 when it was harmonised by Vaughan Williams for ‘Lord, enthroned in heavenly splendour’ in the English Hymnal. It made such an impression on Vaughan Williams that he wrote he later wrote this Organ Prelude which conveys its austere and solemn grandeur.

The Welsh-language title, ‘Bryn Calfaria,’ means ‘Mount Calvary,’ which adds to my reasons for listening to this composition on this early morning in Lent.