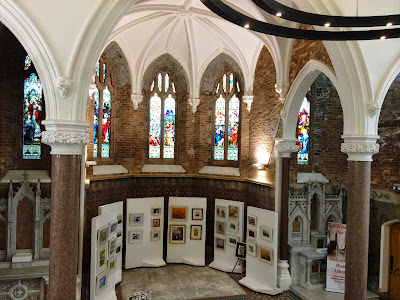 The Ashlin and Coleman church in Rush has been transformed into a library in a prize-winning project by McCullough Mulvin Architects (Photograph: Patrick Comerford, 2014)

I found myself back on the Pugin trail again when I visited the prize-winning Library in Rush in Fingal, north Co Dublin. McCullough Mulvin Architects, who designed the innovative library project, were recognised internationally when they were honoured at the World Architecture Festival in Barcelona.

In 2010, it was recognised as the Best Conservation / Restoration Project. The library project involved the transformation of the former Saint Maur’s Church, which I have often seen from the outside, but only visited for the first time this afternoon.

The former Saint Maur’s Church dominates the village green on the western edge of Rush, opposite the former entrance to Kenure House. It stands on the site of an 18th century chapel. But the present building is Victorian Gothic in style, with its pink surrounds, grey stone walls and Gothic windows and tower.

The church was deconsecrated and served as an arts centre until 2007, when Fingal County Council commissioned McCullough Mulvin to transform it into Rush Library.

At the time, Niall McCullough said: “The work combined a careful investigation and conservation of the existing structure with a particular concern for the rescue of ordinary materials, making a distinctive intervention into it to hold the new facilities.” He explained: “This is formed as an undulating walnut plane which fills the nave running across the floor and up on both sides; the shape is barely contained, pushing tensely against the shell of the existing building.”

He told the Irish Independent: “Though not ruinous, the building was not in good condition when discussions began about the new work. There was extensive dry and wet rot and repair required to many features. The nave had formerly been dry-lined internally, leading to extensive spalling of plaster to walls. Minimal repair was taken as the approach.” 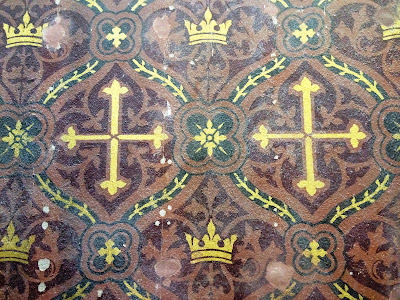 Original decoration in the chancel is typical of Pugin-style churches (Photograph: Patrick Comerford, 2014)

The cruciform shape of the former church was retained and the original entrance is now the entrance to the library. The architects said: “The chancel was retained as it stood with some brickwork construction exposed, making a highly coloured space at the focus of the building. The main body of the interior was painted white on a lime plaster base and the confessional cubicle became a music listening booth.”

A chapel was first built here by Canon Thomas Murphy in 1760 on the site of an earlier mass house. This chapel was remodelled and enlarged in 1851 by the Parish Priest of Rush, Father Andrew Fagan, who removed the wings of the T-shaped building, preserved the nave but lengthened it, raised the walls to give the building a give greater elevation. The result was a fairly spacious oblong church, but devoid of all architectural merit.

The church that had been crudely repaired and extended in 1851 was showing signs of disintegration when Canon Michael O’Hea was became Parish Priest of Rush in 1898. He consulted George Ashlin, then Ireland’s most eminent Church architect, who recommended a complete remodelling of the building. 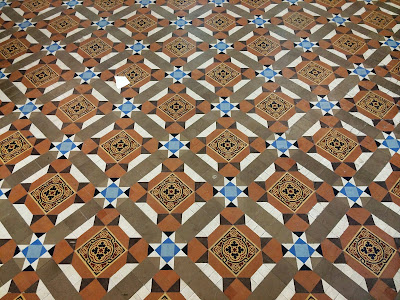 Tiling in the chancel ... part of the Pugin-style work retained in the library (Photograph: Patrick Comerford, 2014)

The body of the Church was retained as the nave of the new work, and transepts and chancel were added in alternate courses of red and white concrete blocks, all finished off with a handsome bell-tower, leaving it one of the most spacious and architecturally perfect rural churches in Dublin at the time. The work cost £5,123, and a furtrher £500 was spent on altars, stations of the cross, Communion rails, confessionals, and other additions.

The Dublin-based architect, George Coppinger Ashlin (1837-1921) is closely identified with the work of the Pugin family, and was a son-in-law of AWN Pugin. He was the third son of John Musson Ashlin, JP, of Rush Hill, Wandsworth, Surrey, and his wife Dorinda Coppinger, and was born at Carrigrenane House, Co Cork, on 28 May 1837.

Ashlin was educated in Liège, and then at Oscott College, near Birmingham (1851-1855), where he was already preparing for a career in architecture.

Oscott was one of AWN Pugin’s great projects, and In 1856 Ashlin became a pupil of Pugin’s son, Edward Welby Pugin, first in Birmingham and then in London, and from 1858 to 1860 he was also a student at the Royal Academy.

When Ashlin went into partnership with Edward Pugin, he undertook setting up a Dublin branch of the practice and taking charge of the Irish commissions, including the large new church of SS Peter and Paul in Cork.

By 1861, he had opened the office of Pugin & Ashlin at 90 Saint Stephen’s Green. Many commissions followed, almost all of them for Roman Catholic churches, convents and monasteries, including the new cathedral at Queenstown (Cobh), Co Cork.

The partnership of Pugin & Ashlin was dissolved at the end of 1868, but, as Ashlin had married Edward Pugin’s younger sister Mary Pugin (1844-1933) in 1867, family ties remained close.

Ashlin was in partnership with his brothers-in-law, Peter Paul Pugin and Cuthbert Pugin, from 1875 to 1880, but worked under his own name in Ireland, where he had a highly successful practice.

In 1903, he invited his former pupil and office manager, Thomas Aloysius Coleman, to join him in the new partnership of Ashlin & Coleman. His other pupils and assistants included Alfred Ignatius McGloughlin, who supervised the Portrane Asylum project before emigrating to the US ca 1900.

As president of the RIAI (1902-1904), Ashlin represented Irish architects on the RIBA’s committee on registration.

Alfred Edwin Jones, who became a pupil in Ashlin & Coleman’s office in 1911, remembered Ashlin as a tall, commanding figure with “an appearance of distinction.”

Ashlin died at the age of 84 on 10 December 1921, at St George’s, Killiney, the house he had designed for himself. He was buried in Glasnevin Cemetery. His only child, Miriam Francis Xavier, married his nephew and partner, Stephen Martin Ashlin, in 1904.

The Communion rails, a side altar, the pulpit, and the the stained glass in the church in Rush were the work of Earley and Co (1907-1912), the Dublin church decorators and stained glass artists based in Upper Camden Street who were successors to the partnership of Earley and Powell. 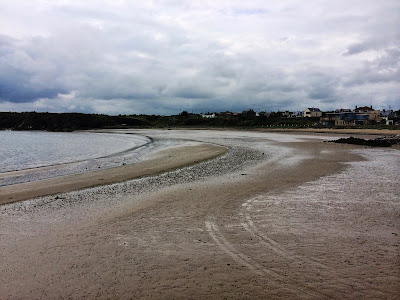 On the beach in Loughshinny this afternoon (Photograph: Patrick Comerford, 2014)

Before visiting Rush Library, two of us had spent the afternoon walking two beaches in Fingal. We first stopped in tiny Loughshinny, where, despite the gloomy clouds overhead, there was a small yacht in the nay, some fishermen selling from their trawlers in the harbour, and later, one lonely rower in a kayak. 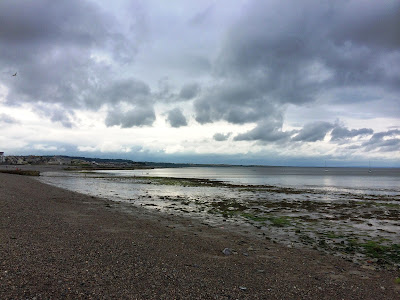 Walking on the North Beach in Skerries this afternoon (Photograph: Patrick Comerford, 2014)

In Skerries, we stopped for lunch and double espressos in the Olive Café on Strand Street, which has a new menu, had opened a new Deli next door, and still serves the best espresso in Fingal.

The second-hand book section of a charity shop seemed to be irresistible, and I ended up with a handful of bargains before walking for a short time on the North Beach.

The grey clouds overhead did not deter the number of children there enjoying the sea and sand. Children always seem to know how to make the best of summer. 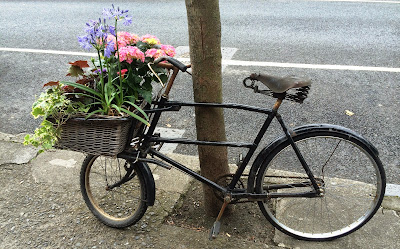 Posted by Patrick Comerford at 21:02 No comments:

On Thursday evening at 8.30pm, in Kilcoole Golf Club, the Kilcoole Heritage Group will host a talk by the Revd Professor Patrick Comerford, from the Church of Ireland Theological Institute, who will speak about Sir Thomas Myles and his role in the Kilcoole gun-running. The organisers of the gun running were mainly members of the Church of Ireland, including Sir Thomas Myles whose yacht, the Chotah, was used. He was an elder brother of the Very Revd E.A. Myles, Rector of Tullylish in Co Down and Dean of Dromore.

Posted by Patrick Comerford at 10:32 No comments: