Visiting the Palatine centre
and museum in Rathkeale

Earlier this week, I took a long walk in Rathkeale, along the west and north bank of the River Deel, from the bridge below Holy Trinity Church, up to the old railway bridge, with views across the river to the school, the church and the castle.

For over 300 years, Rathkeale and the surrounding area is the heart of the Palatine countryside in west Co Limerick. In 1709, several hundred families of German origin settled in Ireland. These Palatines, they established roots mainly in Co Limerick, Kerry, Tipperary and Wexford. From here they emigrated to many parts of the English-speaking world including Australia, Canada, England, New Zealand and the US.

The Irish Palatine Association was established in 1989 to develop a sense of identity among Irish Palatine families and their descendants and to forge links with their ancestral homeland, the Palatinate or Rheinland-Pfalz in Germany.

In the early 17th century, the Lower German Palatinate was rich with Protestant refugees, both Calvinists and Lutherans. Some were German-speakers, others were the French-speaking Huguenot refugees and their children and grandchildren who had fled France after the revocation of the Edict of Nantes by Louis XIV in 1685. These families were fleeing persecution, hoping to rebuild their lives, but the Palatinate was repeatedly ravaged by attacks from France.

Following a harsh winter in 1708 and 1709, there was a substantial exodus of Palatine families in 1709. Some families found their way directly to the New World, but over 13,000 refugees arrived in London.

Irish landlords were supported by Queen Anne in their proposals to increase their Protestant tenant population. In September 1709, almost 3,000 Palatine refugees in England were relocated to rural Ireland, while a similar number were sent to New York and North Carolina. However, over the next three years, more than two-thirds of the Palatine settlers in Ireland left and returned to England and Germany. 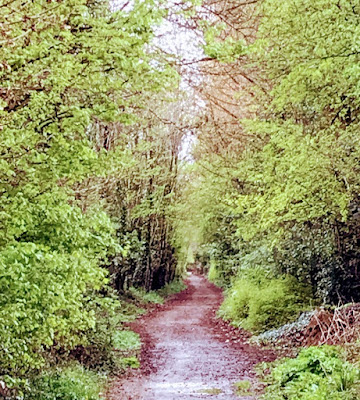 Sir Thomas Southwell (1665-1720) of Castle Matrix, near Rathkeale, secured government support to settle Palatine refugees in west Limerick. Castle Matrix was first built as a fortress during the early 1400s by the 7th Earl of Desmond. Two famous visitors that came to stay at Castle Matrix were the poet Edmund Spenser and Sir Walter Raleigh. In the 17th century, the castle was granted to the Southwell family who converted it to a manor house. Sir Thomas Southwell who was a key figure in bringing Palatine refugees to Ireland, lived at Castle Matrix when he settled 100 families on his Rathkeale estate. He took care of many of their initial needs at considerable personal expense.

In 1711, only 10 Palatine families had settled on the Southwell estate. But by 1714 he had settled about 130 families on his lands, and to this day the region around his demesne has the largest concentration of Irish Palatine descendants in places such as Killeheen, Ballingrane and Courtmatrix.

Thomas Southwell, who had been MP for Co Limerick County in 1695-1713 and 1715-1717, succeeded his father as a baronet in 1681, and became a peer in 1717 with the title of Baron Southwell of Castle Mattress, Co Limerick. Southwell was only reimbursed for the costs of settling the refugees on his lands shortly before his death in 4 August 1720. A fading monument in Holy Trinity Church, Rathkeale, recalls his life.

A generation later, the Palatine people in the Rathkeale area played a formative role in the development of world Methodism. Early in 1749, Robert Swindells was the first Methodist preacher to visit Limerick. A detachment of the Black Watch had moved to Limerick from Dublin, and there was a number of Methodists among the junior officers. Thomas Walsh from Ballylin, between Adare and Rathkeale, was among those who heard Swindells preach in the open and became a Methodist.

Later that year, another Methodist preacher, Thomas Williams, came to Limerick. He was heard by a number of Palatines who had come from the Rathkeale area to attend the assizes in Limerick. Their immediate reaction was, ‘This is like the preaching we used to hear in Germany!’ Those who came to hear Williams included Philip Guier, the Burgomeister and schoolmaster of Ballingrane. Guier and Walsh both became Methodist local preachers. Walsh worked with John Wesley in Ireland and England until his tragic death at the early age of 28. Guier remained a local preacher among the Palatines in west Limerick until he died in March 1778. A century later, he was still remembered as the man ‘who drove the devil out of Ballingrane.’

Methodist societies were formed in Ballingrane, Courtmatrix, Killeheen, Pallaskenry, Kilfinnane and, somewhat later, Adare. John Wesley first visited the Palatines during his sixth Irish visit in 1756. He visited Ballingrane and Pallaskenry, which he called either Newmarket or Pallas. He described those he met as ‘a plain, artless, serious’ people. Later, he visited the area during 13 other tours, sometimes visiting Courtmatrix, Killeheen, Kilfinnane, and on one occasion Adare. He noted that in the Palatine communities there was ‘no cursing or swearing, no Sabbath-breaking, no drunkenness, no alehouse,’ and that ‘their diligence turns all their land into a garden.’ 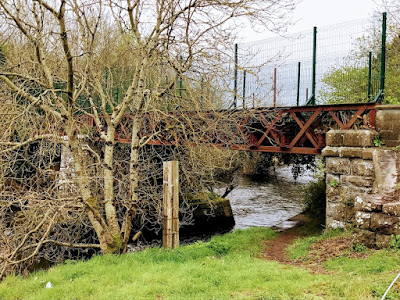 In 1765, Wesley condemned the attitude of their landlord, Thomas Southwell (1698-1766), 2nd Baron Southwell, claiming: ‘As they could not get food or raiment here, with all their diligence or frugality, part are scattered up and down the kingdom [of Ireland] and part gone to America.’ But his judgment may have been too harsh – the Palatine families were growing and needed more space than the Southwell estate could provide, and some of the more enterprising left for New York in 1760. They included Barbara (Ruttle) Heck and her cousin Philip Embury, who had been a local preacher in Ballingrane. Philip Embury preached the first Methodist sermon in New York to a congregation that included his wife Margaret, Barbara and Paul Heck, another Irish Palatine John Lawrence and the Emburys’ Afro-American servant Betsy.

From this small beginning, a society grew that built a chapel on John Street, and asked John Wesley to send preachers from England. In 1770, some of the New York Palatines, led by Philip Embury, moved to the Camden Valley on the boundary of New York and Vermont, almost 300 km north of New York City. When the American War of Independence broke out, most of them supported the British side. Between 1778 and 1780, most of them moved into Upper Canada, now known as Ontario.

Philip Embury had died in the Camden Valley, but Barbara Heck survived and settled at what is now Prescott. She had played a pioneering role in Methodism in three different areas. The Methodist Churches in the US have since grown to their present size of over 10 million.

Back in Ireland, the distinguished Irish preacher Adam Averell visited the Palatine communities in 1794, 1795 and 1796. The Methodist chapels at Killeheen and Courtmatrix had closed by the middle of the 19th century, and people went to the chapel at Ballingrane.

The Embury and Heck Memorial Methodist Church in Ballingrane was first built in 1766. The original, probably thatched, chapel was replaced by the present building in 1829, and in 1885 its extensive grounds were laid out as a cemetery. This remains one of the few Methodist cemeteries in Ireland. This is the last remaining Methodist place of worship in the Rathkeale area, and the congregation is almost exclusively of Palatine ancestry.

In 1797, a chapel was built on the Limerick side of Adare. In 1819, an annual Field Meeting began beside a tree where John Wesley had preached near the Franciscan ruins in Adare. By the end of the 19th century, the attendance at this Field Meeting was estimated at 1,000. With road redevelopment in Adare, the chapel moved to the far end of the town, and the present building was opened in 1871.

A new Methodist chapel was built at Pallaskenry in 1803 or 1814, but by the early 20th century the congregation had fallen in numbers, and services there came to an end in 1921. In 1830, the Legear family transformed two cottages into a small chapel to serve a few families in Newborough area. During the Irish Civil War in 1921-1923, this chapel was burned down, and a new chapel was built on the site soon after. This chapel closed in 1967.

A Methodist chapel was built in Rathkeale in 1873, and a schoolhouse was added on the site four years later. Both were closed and sold in 1968.

Holy Trinity Church, the Church of Ireland parish church, was built at the west end of Rathkeale in 1831 but stands on a site that has been a place of worship for over 700 years. The uneven cemetery is the burial place for many Palatine families, with weather-worn gravestones that are sometimes difficult to read. Beside the church, Rathkeale No 2 National School has been the school for many children from Irish Palatine families. 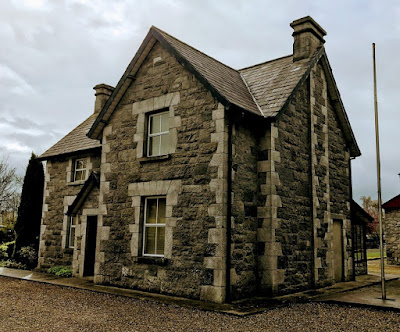 From 1 January 1867 until 31 October 1975, Rathkeale was a busy railway station, and was the only station on the Limerick-Tralee line with a gantry to serve container traffic from the nearby meat traffic.

Since 1989, the Irish Palatine Association has tried to preserve the rich heritage of Irish Palatine culture, encouraging and developing a sense of identity among Palatine families and their descendants. Today, the former railway station is home to the Irish Palatine Heritage Centre, which houses an exhibition on the Irish Palatine experience, from their German origins, to their arrival in Ireland, and their subsequent scattering all over the English-speaking world.

Perhaps the story of the Palatines and their arrival in Ireland three centuries ago is a lesson for Ireland today too. Despite their foreign-sounding language and names and their religious differences, they quickly integrated into life in West Limerick. Their descendants retain a distinctive heritage and a proud history, but are part and parcel of life in this part of Ireland, and a part of the mosaic that makes up the beauty of Irish culture and identity. Hopefully, we will look back in 300 years with the same affection on the story of more recent arrivals in Ireland. 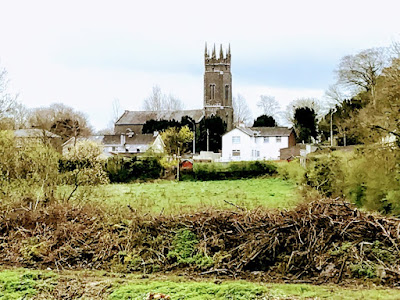 Holy Trinity Church, Rathkeale, seen from the opposite bank of the River Deel (Photograph: Patrick Comerford, 2017) 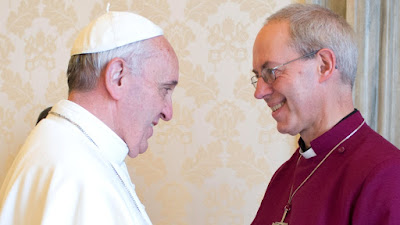 We are now in Passiontide, the last two weeks in Lent, and just a week away from Good Friday [14 April 2017].

Give thanks for our church leaders and pray that they might know God’s wisdom as they seek to encourage their congregations to live as true disciples of Christ.