‘May we be a living sign of that kingdom,
where your whole creation will be made perfect’ 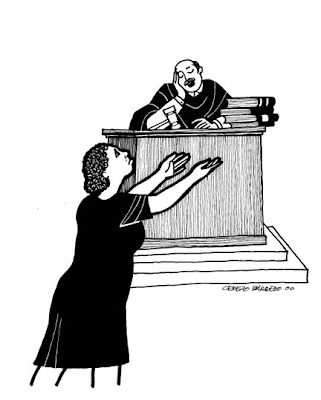 As a tutorial group, we agreed to spend time using the approach of Lectio Divina to the Gospel reading for Sunday week each week.

The text is being read three times by different people.

We shall focus on the differences of delivery, inflections and resonance. Then we discuss what each member of the tutorial group receives from the readings.

The topics are from the Lectionary for the Sunday 10 days ahead, because this would be beneficial for those preaching in placement and give guidance and time for reflection before committing to a sermon. We agreed that some weeks the Lectionary readings could be supplemented or replaced by a chosen poem or other religious writings.

To supplement this approach this morning, I have also prepared a short Bible study on this parable, which is the Gospel reading (Luke 18: 1-8) in the Revised Common Lectionary for Sunday week [16 October 2016], the 21st Sunday after Trinity.

Could a fleeing Syrian refugee expect mercy today in Greece, or in Hungary given the atmosphere that led up to last Sunday’s referendum?

Who is ‘the least of them’ in that reading?

Last week, someone suggested we might conclude with a poem or another reflection.

I have chosen a poem by the late Poet Laureate John Betjeman (1906-1984), Variation on a Theme by Newbolt. It tells the story of how a banker or lawyer in the City of London has died. His colleagues and erstwhile friends are concerned about the funeral arrangements, about what happens to his trappings and status symbols, and how they want to be seen at his memorial service in Saint Katherine Cree.

But no-one stops to think of his widow, how she is grieving, and how she feels she has lost everything. Wait for the sting in the tail.

Variation on a Theme by Newbolt, John Betjeman

The City will see him no more at important meetings
In Renaissance board rooms by Edwin Cooper designed;
In his numerous clubs the politely jocular greetings
Will be rather more solemn to-day with his death in mind.

Half mast from a first floor window, the Company’s bunting
Flops over Leadenhall Street in this wintry air
And his fellow directors, baulked of a good day’s hunting
Nod gloomily back to the gloomy commissionaire.

His death will be felt through the whole of the organization,
In every branch of its vast managerial tree,
His brother-in-law we suppose will attend the cremation,
A service will later be held in St. Katherine Cree.

But what of his guns? – he was always a generous giver.
(Oh yes, of course, we will each of us send a wreath),
His yacht? and his shoot? and his beautiful reach of river?
And all the clubs in his locker at Walton Heath?

I do not know, for my mind sees one thing only,
A luxurious bedroom looking on miles of fir
From a Surrey height where his widow sits silent and lonely
For the man whose love seemed wholly given to her.

(Revd Canon Professor) Canon Patrick Comerford is Lecturer in Anglicanism, Liturgy and Church History, the Church of Ireland Theological Institute. These notes were prepared for a tutorial group with MTh students on 5 October 2016.

‘The flowers and fruits that in thee grow,
let them his glory also show’

I am presiding at the Eucharist in the Chapel of the Church of Ireland Theological Institute this evening [5 October 2016], and the preacher is the Right Revd Dr Ferran Glenfield, Bishop of Kilmore, Elphin and Ardagh.

The Readings, Collect, Proper and Post-Communion Prayer are those of the Nineteenth Sunday after Trinity. But some of the hymns also reflect the fact tha yesterday was the Feast of Saint Francis of Assisi.

These images and this note are published in this evening’s chapel booklet:

This evening’s readings, collect, preface and post-Communion prayer are those for the Nineteenth Sunday after Trinity. Our hymns are in both the Church Hymnal (5th edition) and Thanks & Praise.

Processional Hymn: ‘All creatures of our God and king’ (Church Hymnal, 24) is based on ‘The Canticle of the Sun’ written by Saint Francis of Assisi (1182-1226) shortly before his death, but was not published for almost 400 years. This version was translated by the Revd William Henry Draper (1855-1933), Vicar of Adel, Leeds, and later Master of the Temple, London, for a children’s Whitsuntide festival in Leeds. The words, ‘The flowers and fruits that in thee grow, / let them his glory also show,’ also prepare us for our Gospel reading. The melody, Lasst uns erfreuen (Easter Song) was found in Geistliche Kirchengesäng (Cologne, 1623) and was arranged for the English Hymnal (1906) by Ralph Vaughan Williams (1872-1958) for Athelstan Riley’s hymn, ‘Ye watchers and ye holy ones’ (Church Hymnal, 476).

Gloria: This Peruvian liturgical text (Thanks & Praise, 196), sung to a Peruvian traditional chant, was collected by John Ballantine.

Gradual: ‘Father, hear the prayer we offer’ (Church Hymnal, 645) was written in 1856 by Love Maria Willis (1824-1908) for an American magazine, Tiffany’s Monthly. The tune Sussex is an English traditional tune collected and adapted for the English Hymnal (1906) by Vaughan Williams, who first heard it in Sussex.

Offertory: ‘God everlasting, wonderful and holy’ (Thanks and Praise, 43) was written by Harold Riley (1903-2003). The tune Coelitas plaudant is a melody from the Rouen Antiphoner (1728), and was harmonised by Vaughan Williams for the English Hymnal (1906).

Post Communion Hymn: ‘How sacred is this place’ (Thanks & Praise, 55) is a hymn by the Revd Fred Pratt Green (1903-2000), the Methodist hymn-writer, poet and playwright. He based this hymn is based on the evening canticle Nunc dimittis (Luke 2: 29-32). The melody for Nunc dimittis was included in Pseaulmes cinquante de David, published in Lyons in 1547 by Louis Bourgeois (ca 1510-1561), and the harmony is chiefly by Claude Goudimel (d 1572). 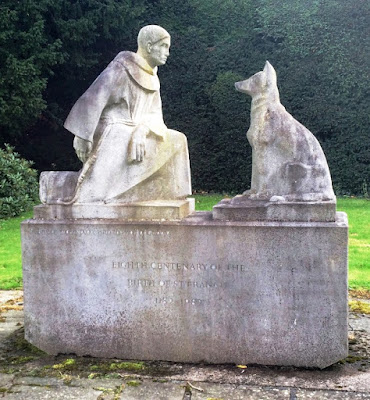 Saint Francis with a fox: ‘All creatures of our God and king, / Lift up your voice and with us sing’ … a sculpture at Gormanston College marking the 800th anniversary of the birth of Saint Francis of Assisi in 1982 (Photograph: Patrick Comerford, 2016)