A day with ‘a very dangerous man’ 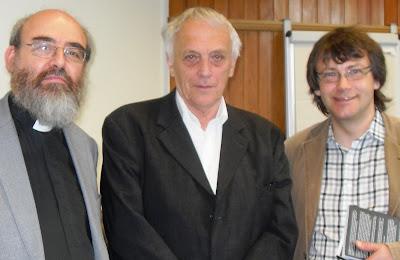 The Revd Donald Reeves (centre) at the Irish School of Ecumenics with Patrick Comerford (left) and Dr Andrew Pierce, Lecturer in in Intercultural Theology and Interreligious Studies at ISE

The Revd Donald Reeves was once described by Margaret Thatcher as “a very dangerous man” and by The Times of London as the “radical rector” and “the most extraordinary clergyman in the Church of England.” At the time, he was the Rector of Saint James’s, Piccadilly, and among Thatcher’s allies he had developed a reputation as a “turbulent priest” – an eminent and honourable place to hold in Anglican tradition.

Now in his late 70s, Donald Reeves works on peace-building and peace-making projects in the Balkans. He has long been a thorn in the side of the Establishment, and when he heard Thatcher’s description of him as “a very dangerous man”, he was “rather pleased … it felt like a natural title.” It is a sobriquet that he came to wear with pride and that inspired the title of his autobiography The Memoirs of a Very Dangerous Man.

The man who enjoyed excoriating Thatcherite dogma and episcopal complacency in the 1980s, emphasises his role these days as a peace-maker rather than as a trouble-maker. Today, he co-directs the Soul of Europe, which has been working at peace-making and peace-building in the Balkans for 10 years. He has been visiting Dublin for the past few days, and spoke this morning about the work of the Soul of Europe at a seminar organised by the Irish School of Ecumenics and co-sponsored by the Church of Ireland Theological Institute.

Through the Soul of Europe project, which he co-directs, Donald Reeves spends much of his time in the Balkans, trying to build durable trust between communities only nominally at peace after terrible conflicts. The Soul of Europe seeks to help people living through post-conflict situations to realise Nelson Mandela’s words first addressed to politicians in Northern Ireland: “If you want to make peace do not speak with your friends, you must speak with your enemies.”

In Kosovo, he has been talking to Serbs and Albanians, seeking to “dismantle the fear each has of the other” and to break down the isolation of minorities – in this case the Serbs, and their ancient religious institutions, living under armed guard. He has tried to help Kosovo’s Albanians and Kosovo’s Serbs to help normalise relations between Kosovo’s Muslim Albanians and two endangered Serbian Orthodox Monasteries at Decani and Pec.

Before Kosovo, he was working in Bosnia. Both Bosnia and Kosovo “are littered with failed projects,” he told us.

In Bosnia, progress was uneven and inconclusive, as he and his colleagues experienced deeply-rooted mutual suspicion and resentment in communities where co-existence had turned overnight into murderous hatred. They had to listen patiently to “raw memories” and accept that there could be “no short cuts, no quick fixes.”

But he is scathing too about the role of the UN, the EU and other peace-keeping bodies and bureaucrats, saying this morning: “I have become very disillusioned with the way European bureaucracy functions.”

He is frustrated by the way in which ignorance of religion has become an embedded in official thinking, so that religion is seen as matter of choice and that a real illiteracy of religion has emerged. It means churches and mosques are valued only and merely as places of cultural heritage and not as living religious communities. But “religion is the crucible in which the ‘chosen trauma’ of a community is held.”

He expressed a deep-seated “nervousness” about growing Islamophobia in Europe, which he described as an “alarming phenomenon.”

“The Muslims are the new Jews of Europe,” he said. 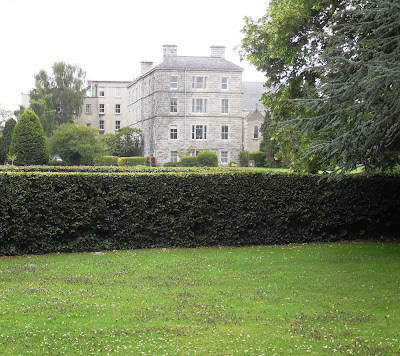 Donald St John Reeves was born in 1934 and had a conventional middle-class upbringing. He was educated at Sherborne School and spent two years in the Royal Sussex Regiment, before studying at Queens’ College, Cambridge. While he was teaching in Beirut in the 1960s, he felt called to ordained ministry, and after training at Cuddesdon Theological College he was ordained deacon in 1963 and priest in 1964. Following two years as a curate in Maidstone in the Diocese of Canterbury, where he was already a controversial figure, he became chaplain to Bishop Mervyn Stockwood of Southwark, who had a reputation for controversy and socialist politics.

After being radicalised in Chicago in 1968, he returned to England and carried the revolution to a housing estate in South London, where he was Rector of Saint Helier in Morden from 1969 to 1980. But his heyday was as Rector of St James’s, Piccadilly, a space he filled with extraordinary worship, celebrated pulpit dialogues, a coffee house and street market. Those who passed through the church doors included leading international film-makers, writers, theologians and politicians.

He was the Rector of Saint James’s, Piccadilly, for 18 years until 1998. When he first arrived at Saint James’s Piccadilly in 1980, it was not an auspicious place. Although the church was known for society weddings, there was little evidence of a congregation rooted in the community: “On my arrival,” he says, “I could see no justification for keeping the church open.”

The church where William Blake was baptised was in noble decay and facing closure. Four years later, as the church celebrated it tercentenary, he was able to tell the Guardian: “There’s only one thing to do with a church which is slap in the centre of London and whose congregation has dwindled ever since the 19th century brought business to where town houses used to be: you use the site and turn it into a showcase for Christianity.”

Gradually, he turned Saint James’s into a thriving institution, closely linked to local people, both rich and poor, and a place for exploring ideas. Saint James’s soon had its own orchestra, a full-time arts director, a programme of lectures called “Turning Point,” and a programme called “Dunamais” offering lectures, workshops and the opportunity to explore issues of personal, national and international security in the nuclear age. The church became a centre of both liturgical innovation of theological debate and radical politics. He encouraged debate across the boundaries, inviting speakers as diverse as Norman Tebbit and Tony Benn, non-believers as well as believers.

“Jesus wasn’t exactly into garden parties. He was regarded as a nuisance,” he says. “The churches shouldn’t be creating little managers of sectarian communities but should be places of dissent.”

His own challenge to Thatcherism was overt. He sparked lively debate by speaking out against the Falklands War and by helping the miners’ wives during their husbands’ bitter strike. After several brushes with Margaret Thatcher, she described him as “a very dangerous man” – an acknowledgement that by then he was part of the Anglican tradition of “troublesome priests” – apt to turn critical fire not only on the world but on the Church too.

In anticipation of his later work in the Balkans, he began to explore the idea of peace-building, inviting Chinese and Russian visitors. Bishop Trevor Huddleston, a veteran campaigner against apartheid, who lived in the Saint James’s Vicarage for many years, was another significant influence.

Today he devotes most of his energies to his peace-building projects in the Balkans, and his energy is inexhaustible, even in his 70s.

He was made MBE in 2006 for his peace-building in Bosnia, and for fostering good relations between the Abrahamic Faiths he was awarded the Muhammad Nafi Tschelebi Peace Prize last year by the Tschelebi Institute, the oldest Islamic organisation in Germany. He is a Visiting Fellow in Peace Studies at Leeds Metropolitan University, and now lives in Crediton in Devon. But his mark is still evident at Saint James’s, Piccadilly, with its inclusiveness, its celebration of other faith traditions, its social justice ministries to the marginalised in greater London, and its continuing work with asylum seekers.

We had lunch together before he headed back to England this afternoon. I hope we continue to hear his radical voice for many years to come.

Posted by Patrick Comerford at 20:06 No comments: