A link to a recording of Sunday’s sermon

Here is a link to a recording of last Sunday morning’s sermon [13 October 2013], preached in the chapel of the Church of Ireland Theological Institute, and which went online on Wednesday evening.

The text of the sermon is also available here.

Posted by Patrick Comerford at 23:18 No comments: 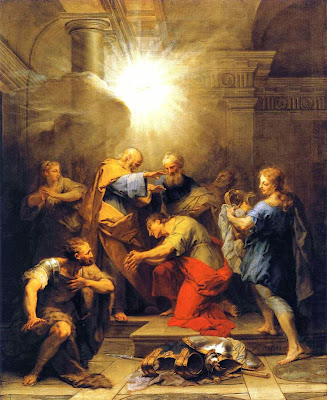 In our tutorial group this year, we have decided to look at “Heroes” – Heroes of the Bible and Heroes of the Faith. We have agreed to introduce a favourite personality in turn, and this week we are looking at Ananias of Damascus, a devout man who is a disciple in Damascus, and who baptises Saint Paul after his dramatic conversion on the road to Damascus.

He is mentioned twice in the Acts of the Apostles, first in the account of Saint Paul’s conversion (see Acts 9: 10-19), and later, when Saint Paul recalls those dramatic days (see Acts 22: 12-16).

10 Now there was a disciple in Damascus named Ananias. The Lord said to him in a vision, ‘Ananias.’ He answered, ‘Here I am, Lord.’ 11 The Lord said to him, ‘Get up and go to the street called Straight, and at the house of Judas look for a man of Tarsus named Saul. At this moment he is praying, 12 and he has seen in a vision a man named Ananias come in and lay his hands on him so that he might regain his sight.’ 13 But Ananias answered, ‘Lord, I have heard from many about this man, how much evil he has done to your saints in Jerusalem; 14 and here he has authority from the chief priests to bind all who invoke your name.’ 15 But the Lord said to him, ‘Go, for he is an instrument whom I have chosen to bring my name before Gentiles and kings and before the people of Israel; 16 I myself will show him how much he must suffer for the sake of my name.’ 17 So Ananias went and entered the house. He laid his hands on Saul and said, ‘Brother Saul, the Lord Jesus, who appeared to you on your way here, has sent me so that you may regain your sight and be filled with the Holy Spirit.’ 18 And immediately something like scales fell from his eyes, and his sight was restored. Then he got up and was baptised, 19 and after taking some food, he regained his strength.

12 ‘A certain Ananias, who was a devout man according to the law and well spoken of by all the Jews living there, 13 came to me; and standing beside me, he said, “Brother Saul, regain your sight!” In that very hour I regained my sight and saw him. 14 Then he said, “The God of our ancestors has chosen you to know his will, to see the Righteous One and to hear his own voice; 15 for you will be his witness to all the world of what you have seen and heard. 16 And now why do you delay? Get up, be baptised, and have your sins washed away, calling on his name.”

Although Ananias is only mentioned twice in the Acts of the Apostles, he is a disciple who has a major impact on the life, mission and ministry of Saint Paul.

The name Ananias is a frequently-occurring male name throughout the Bible. The Greek form Ἀνανίας comes from the Hebrew Hananiah, “favoured of the Lord” or “compassion for God.”

He should not be confused with an earlier Ananias, who, along with his wife Sapphira, is a member of the early Church in Jerusalem; both suffer sudden death after lying about the proceeds from the sale of their possessions, which they refuse to share fully (Acts 5: 1-11). Nor should he be confused with the High Priest Ananias who takes part in the trials of Saint Paul.

This high priest presided over the Sanhedrin meeting called to interrogate Saint Paul following his arrest in Jerusalem (Acts 22: 30 to 23: 5). Because of his insolent command to strike Saint Paul on the mouth, Saint Paul calls him a “whitewashed wall” (23: 3). This Ananias also travels from Jerusalem to in Caesarea to be present and support the charges against Saint Paul in the trial before Felix (see Acts 24: 1).

Ananias, the son of Nebedeus, was appointed the High Priest by Herod, King of Chalcis (Josephus Antiquities 20.5.2), in 48 AD, and he held office until 58 AD. He has been called one of the most unworthy men to hold the office of “high priest.”

A Sadducee, he was haughty, wealthy, and unscrupulous, and was accused of gross cruelty. He was hunted down and murdered in 66 AD.

Ananias of Damascus stands in sharp contrast to these other New Testament characters with the same name. Ananias of Damascus figures twice in the Acts of the Apostles, where he is sent by the Lord to restore the sight of Saul of Tarsus and to provide him with additional teaching after his blinding conversion on the road to Damascus.

We are told that Ananias is a disciple and a devout Jew, living in Damascus, where he is held in high regard among all the Jews who live there (Acts 9: 10, 22: 12).

Ananias is a devout man (see Acts 22: 12). The word translated here as devout, εὐλαβής, occurs in only one other passage in the Greek New Testament. In Luke 2: 25, it is used to describe Simeon as a man who was “righteous and devout, looking forward to the consolation of Israel.”

The word εὐλαβής is translated as devout, meaning being cautious or pious, perhaps even, as in some translations, “God-fearing.” But it has many more proactive implications in the original Greek which literally means “taking hold of what is good.” It focuses on the outward response someone gives to what they feel is truly worthwhile and worthy of respect.

In the case of both Simeon and Ananias, being devout means their reverence for God is shown in their lifestyle, their expectations and their actions. They both practice what they believe and preach.

In other words, Ananias knew the voice of the Lord, listened to it and answered it; he acted on what he heard.

During Saint Paul’s conversion experience, Christ tells him to go into the city of Damascus and wait. Christ later speaks to Ananias in a vision, and tells him to “go to the street called Straight, and at the house of Judas look for a man of Tarsus named Saul” (Acts 9:11).

Ananias has all the natural, human reactions and reluctance that the rest of us would have, and is hesitant about doing what he is told to do, not merely out of fear, but because he knows and dislikes Paul’s reputation.
Yet, God trusts in Ananias, although Ananias objects, answering that Saul had done “much evil … to your saints in Jerusalem.” Ananias is told him that Saul is “an instrument whom I have chosen to bring my name before Gentiles, and kings, and before the people of Israel” (Acts 9: 13-15).
Despite Paul’s past reputation, Ananias obeys God’s voice and follows the instructions to go to the house of Judas. So, Ananias relies on God more than on his own instincts.

Although no-one has told him of Paul’s conversion, Ananias trusts in God and calls Saul “Brother Paul” (Acts 9: 17). When Ananias goes into the house and lays hands on Saul, scales fall from Saul’s eyes fell off, he looks up at Ananias is taught more about Christ and his call to be a witness, is baptised, eats and regains his strength (Acts 9: 18-19; see Acts 22: 16).

What happened to Ananias?

If Ananias is so central to the story of Saint Paul’s conversion and baptism, we may wonder why Saint Paul does not refer to Ananias in his later account of his conversion before Agrippa II (see Acts 26: 12-20).

The controversial American Biblical scholar Robert Eisenman identifies Ananias of Damascus with Ananias of Adiabene (ca15 BC–ca 30 AD), a Jewish merchant and mendicant proselytiser, probably of Hellenistic origin, who, in the early first century AD was prominent at the court of Abinergaos I, King of Characene. However, this has proposition has found little or no acceptance among conventional scholars.

According to Hippolytus and the tradition of the early Church, Ananias of Damascus is placed in the list of the seventy disciples of Christ (see Luke 10: 1-24). He is said to have become the first Bishop of Damascus, and he is said to have died a martyr’s death.

There is an ancient building in Damascus that is known as the House of Saint Ananias. It is in the old Christian quarter of the city, and is said to be the house where Ananias baptised Saul. This house is near the Eastern Gate, at the very end of the Street Called Straight.

Five metres below ground level, the church is supposedly housed in the cellar of the House of Ananias, but it was probably built at the level of the Roman street. The church, which has been restored many times, is the city’s only surviving early Christian house of worship to survive from the first century.

In the Roman Martyrology, Ananias is commemorated on 25 January, the same day as the Feast of the Conversion of Saint Paul.

Canon Patrick Comerford is lecturer ion Anglicanism, Liturgy and Church History, the Church of Ireland Theological Institute. This essay is based on notes for a discussion group among MTh students on 16 October 2013.