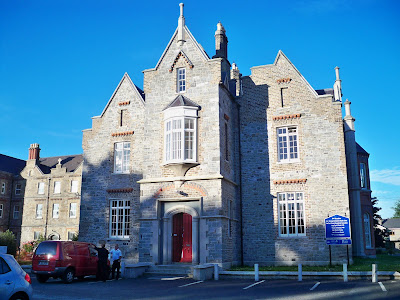 For three years, I was a student at the Holy Ghost Missionary College in Kimmage Manor. I was there from 1984 to 1987, studying theology full-time while holding down a full-time position as a journalist with The Irish Times.

Although I was a complete outsider – most of the other students were members of religious communities, such as the Spiritans and the Redemptorists – I was made welcome and a part of the student body. For a year, I sat as a student representative on the Theology Faculty Council, and I still keep in contact with friends I made over those three years.

This month marks the 100th anniversary of the founding of the Holy Ghost Mission College at Kimmage Manor in 1911.

In 1641, all the lands of Kimmage, Terenure and Milltown were in the hands of Peter Barnewall, and they included a castle in good repair on the lands of Kimmage. Tthrough the years that followed, there were various owners and tenants, and Rocque’s map from the mid-18th century shows extensive buildings on the location of the present Manor House. 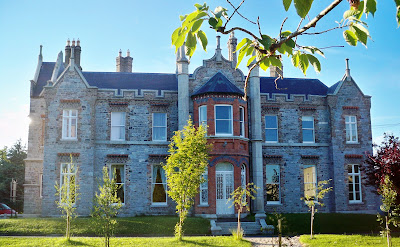 Sir Robert Shaw inherited Terenure House from his father. He was MP for New Ross, Co Wexford, in the Irish House of Commons, when he voted against the Act of Union, and later was MP for Dublin from 1804 to 1826 in the British House of Commons. He was a founder of Shaw’s Bank, which later became the Royal Bank of Ireland.

He inherited vast tracts of land in south Co Dublin, including Bushy Park House, named after the Bushe family, and Kimmage House (now Kimmage Manor), through his marriage to Maria Wilkinson of Bushy Park, a wealthy heiress and the only daughter of Abraham Wilkinson.

His second son, Frederick Shaw, was educated at Trinity College Dublin and Brasenose College, Oxford. He was called to the Irish Bar in 1822 and later become Recorder (or part-time municipal judge) for Dublin and Dundalk.

A year after moving into Kimmage House, Shaw was elected MP for Dublin City in 1830, and was re-elected in 1832. He then sat as MP for Dublin University from 1832 until 1848. He was made a Privy Councillor in 1835. At the time, Shaw was regarded as one of the most brilliant orators and ablest leaders and debaters in the British parliament. One of his greatest parliamentary triumphs was a speech in 1834 against Daniel O’Connell’s motion calling for a select committee to inquire into the conduct of Baron Smith in introducing politics into his charge to a grand jury.

The oriel window at Kimmage Manor … part of the Elizabethan and Tudor restyling of Kimmage House by Sir Frederick Shaw (Photograph: Patrick Comerford, 2010)

Frederick Shaw rebuilt Kimmage House on the banks of the old Dublin watercourse in the style of Tudor manor, with high, triangular gables, spiral turrets and tall chimneys. The windows, especially the projecting oriel window, the doorways and the interior designs – including the vaulted vestibule, miniature great hall, panelled ceilings and ornate mouldings – are all modelled on Elizabethan architectural styles.

The Shaw family lived in an L-shaped section of the present manor house, facing the present Mission House. This embraces the present manor basement, the mezzanine floor used today as a meeting room, classroom 3 and the APA office. The top floor comprises the present staff office, classroom 4, administration office and the office of the MA co-ordinator. The historian of Kimmage Manor, Father Paddy Ryan, who was my lecturer in Church History, estimates this L-shaped section of the house is at least 250 years old.

Within two years of their arrival, the Shaw family had built a two-storey addition to the south side of the L-shaped existing building and more than doubled their floor area. The front entrance, entrance hall, reception area and staircase were built. On the same floor, reception rooms that later became classroom 1, the computer room and Friere room were added. 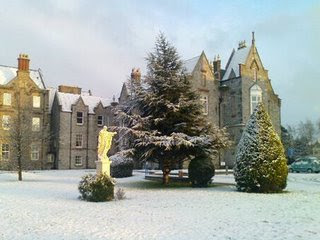 Kimmage Manor in the snow ... happy memories of student days in the 1980s

Frederick Shaw’s younger brother, the Revd George Augustus Shaw (1815-1839), was the perpetual curate or Vicar of Rathfarnham when he died of typhus fever at their father’s house, Bushy Park, at the age of 24 on 1 September 1839. Like many members of the Shaw family, he was buried in the old Church of Ireland churchyard in Rathfarnham Village.

When his elder brother, Sir Robert Shaw, died in 1869 and Sir Frederick Shaw inherited the family title, he decided not to move to Bushy Park, and continued living at Kimmage Manor with his family until his death in 1876.

Sir Frederick died at Kimmage House on 30 June 1876, at the age of 76, and was buried in Mount Jerome Cemetery, Harold’s Cross. His eldest son, Sir Robert Shaw (1821-1895) became the fourth baronet and the moved with his family to Bushy Park, where he lived until his death in 1895.

Kimmage House was leased to various tenants. The first tenant was Edward Chetwode, but he later sold his lease to Edgar Kenyon, but the house was often unoccupied. In 1898, Mrs Mary Ida Clayton leased the house and lands in perpetuity and came to live in the house with her two sons. By the beginning of the 20th century, Kimmage House was known as Kimmage Manor.

The Spiritans bought Kimmage Manor from Mrs Clayton on 7 June 1911, and it was agreed immediately that the new foundation would be known as the ‘Holy Ghost Missionary College, Kimmage, Dublin’.

By then, the Shaw connection with Terenure House was long ended, and the Carmelites opened Terenure College there in 1860. The Shaw family connection with area came to an end 60 years ago when the house and lands at Bushy Park were sold to Dublin Corporation in 1951.