Walking along the cliffs
from Bray to Greystones 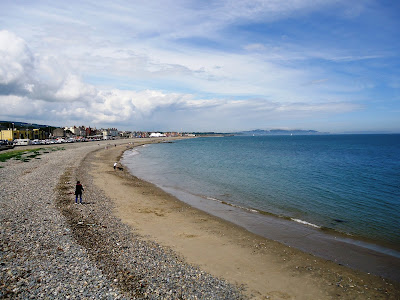 Panoramic views of Bray at the start of the Cliff Walk (Photograph: Patrick Comerford, 2013)

The predicted rain and thunder never came this afternoon, and two of us went to Bray and parked the car in front of the Bray Head Hotel. It’s difficult to know whether this hotel is open or closed – it appears to be more elegant inside than its decaying exterior would indicate.

The sign said you could pay at reception, but the there was no-one around apart from a handyman-caretaker who had a key to the front doors and was letting no-one in as he collected €3 for each car in between whitewashing the side walls of the hotel.

On this sunny afternoon, €3 was good value, as we set off along the 6-km long cliff walk from Bray and Greystones, following a route the train line along the cliffs of Bray Head.

We missed out on the top of Bray Head, which is said to be an attractive and interesting experience. From there, there is a view of Raheen na gClig church, “the little Church of the Bell” or “the little Fort of the Stones.” The remains of the Church, dating from the 12th or 13th century, stand in the middle of Raheen Park. Beside the church, Saint Patrick’s Well was once a site of pilgrimage in early Christian times and supposedly blessed by the saint at one time. 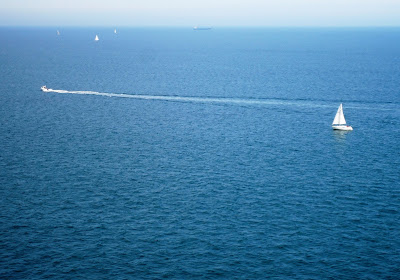 Looking out to the Irish Sea from the Cliff Walk (Photograph: Patrick Comerford, 2013)

Instead we set out on the cliff walk directly. Below us, there were panoramic views down onto the beach in Bray, and across Dublin Bay and out to the Irish Sea.

The highest point along the walk is 127metres (417 feet), the contour is hilly, and at times some of the steep steps were difficult for me with the joint pains in my knees and legs. But the walk offers stunning and dramatic views along the steep cliffs, and down to the Irish Sea and to the railway line below. 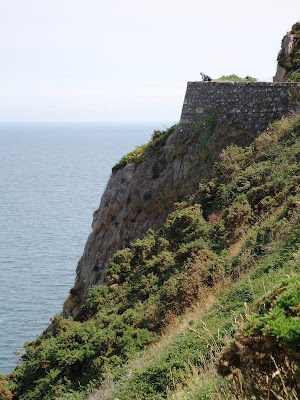 Cornered areas along the cliff walk remind me of Venetian bastions in Crete (Photograph: Patrick Comerford, 2013)

I recalled the stunning walks along the sea cliffs at Cinque Terre in Italy, or some of the walks along the Sorrento and Amalfi Coasts. At one or two points, cornered areas reminded me of the bastions on the old Venetian fortezza on the island of Spinalonga off the coast of Crete.

But there were no ice-cream stalls or bars to break the walk or to take advantage of the summer walkers. 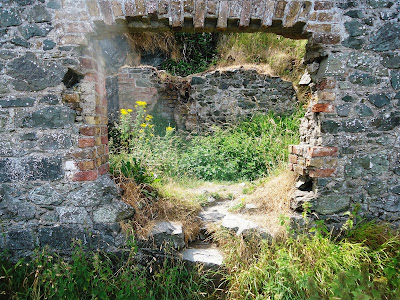 The cliff walk opened up after the construction of the railway line in the 1850s, and there are reminders of this story all along the path.

The ruined Toll Gate at Lord Meath’s Lodge is a reminder that the railway company once owned the walkway up to Lord Meath’s Lodge, leading to Killruddery House. The gate was kept closed and walkers were charged a penny for entry each day except on Fridays. A dirt road was also built around the top of Bray Head for guests, and this was open to the public too. But the cliff walk was closed each Friday when it was reserved for Lord Meath’s own use.

The steps above the toll house led to Kilruddery Estate and the stones for the cottage and the toll gate were collected from the immediate area except for the granite and red brick.

Just beyond Lord Meath’s lodge is an area called the Brandy Hole. The cave was immense with its entrance at sea level, and, it is believed, a connecting tunnel to the path. Brandy, tea, gin, silks and wine were smuggled in from France under cover of darkness or misty weather until the cave was destroyed when the railway was built. 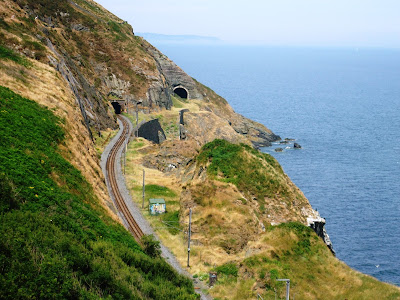 Looking down onto the railway line from the cliff walk (Photograph: Patrick Comerford, 2013)

On 9 August 1867, the train from Enniscorthy to Dublin derailed because of a faulty joint between two rails on the bridge spanning Ram Scalp. Two passengers were killed and 23 people, including the driver and fireman, were injured. The rescue teams found it difficult to access the crash site. A new tunnel was built further into the cliff face after the crash, but the old tunnel entrance can still be seen today.

The cliffs and rocks are home to extraordinary birdlife, including seabirds such as gannets, kittiwakes, great black-backed gulls, fulmars, guillemots, black guillemots, razorbills, shags and cormorants.

Along the Cliff Walk there are many plants and colourful wild flowers such as the Red Valerian, heather, bracken, gorse, honeysuckle and dog rose.

Butterflies and bees flitted in and out between the growth and there was a peculiar black flying creature with red wings that seemed to hover rather than fly in places. 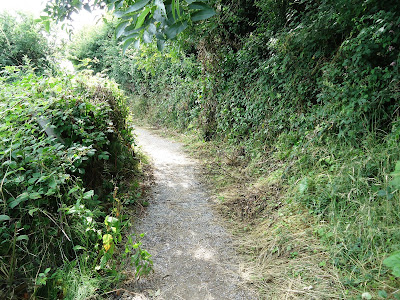 At times, overhanging branches and the hedgerow made this look like a country walk (Photograph: Patrick Comerford, 2013)

At points along the walk, the overhanging branches and the hedgerow made this look like a country walk. Before we reached Greystones, the rock cliffs give way to sandy cliffs and banks, and then moved in a little inland between rolling fields of green and gold. 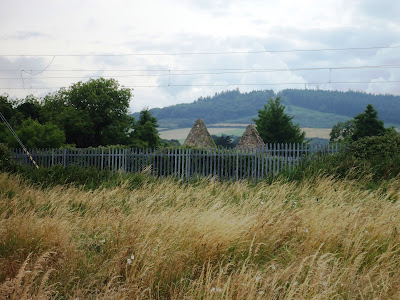 A few paces on, at the junction of the Cliff Walk and the exit to the Grove, we were at the site of the Rathdown Mediaeval Village. Across the railway line, we could see the remains of Saint Crispin’s Church. The medieval settlement at Rathdown gave its name to the Barony of Rathdown which extended from near Kilcoole to Merrion Gates in Dublin.

A castle was built here in the 13th century as protection from other Gaelic families. In 1301, Rathdown was captured and burnt by the O’Byrnes and the O’Tooles. There was still a castle on site in 1536, but at the time of the Down Survey (1657) it had fallen into ruins. These ruins were used as building material during the construction when the railway line was being built in 1854-1856, and there are no visible remains today. 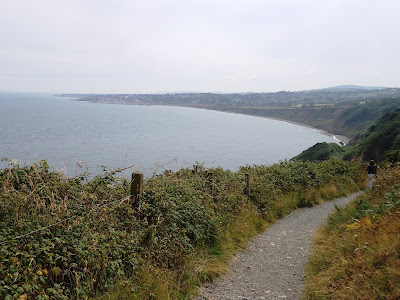 A view of Greystones as I came close to the end of the walk (Photograph: Patrick Comerford, 2013)

The last half kilometre was the only disappointing stretch of the walk, between iron hoarding and railing around wet and neglected building sites, between the railway track and the new marina in Greystones.

The 6 km walk took just over 2½ hours to complete. We rewarded ourselves with a well-deserved and generous lunch in the Happy Pear in Greystones, with a table outside, watching life passing by on Church Road.

There was a lengthy wait at the Dart station in Greystones for a train back to Bray, but we spent the time on the platform reading the Guardian and the Economist.

More information on the Cliff Walk is available here. 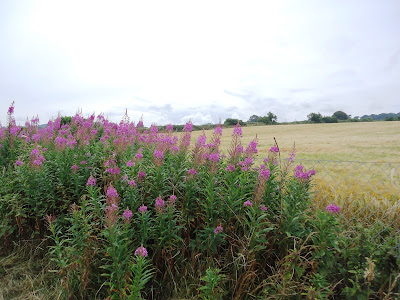 Fields of green and gold near the Greystones end of the Cliff Walk (Photograph: Patrick Comerford, 2013)