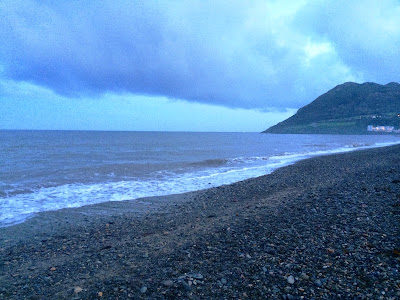 Winter darkness closes in on Bray Head and the beach in Bray this evening (Photograph: Patrick Comerford, 2014)

A working weekend running into a full working week is a sure recipe for feeling tired by the time Saturday comes around again.

The busy working week included a Remembrance Day Service of the Word and celebration of the Eucharist, dissertation supervision and lectures, and an on-campus time at Trinity College Dublin to sort out a new staff ID card and an unused TCD email account that had not been dealt with for over eight years.

In between, I also attended a memorial service in a care home, read the Gospel and took part in a celebration of the Eucharist in Saint John’s Church Sandymount, attended a provincial chapter meeting of the Society of Catholic Priests, attended a meeting of the chapter of Christ Church Cathedral, Dublin, and was present at the launch of the new branding and imaging of the cathedral and a Foundation Day reception in the cathedral crypt after Festal Evensong to mark the Feastday of Saint Laurence O’Toole, patron of the Dioceses of Dublin and Glendalough.

And there was time at the end of the week for a little book browsing and buying, spending wisely with a book token given by the Church of Ireland Historical Society after my recent lecture in Christ Church Cathedral on the Archbishops of Dublin and the Deanery of Penkridge – books on liturgy, Orthodox theology, church architecture and the poetry of TS Eliot.

Some of this morning was spent writing a report and filing photographs on the cathedral launch for the Church Review and the Church of Ireland Gazette. But by this afternoon I needed some fresh air either in mountains or by the sea … and despite the early evenings that come with the arrival of winter, I managed both.

A surprise encounter on the old military road through the Dublin and Wicklow mountains between Tibradden and Glencree (Photograph: Patrick Comerford, 2014)

Late in the afternoon, two of us drove up into the mountains above Knocklyon to Tibradden, and – despite the fading, dimming lights of dusk – we caught the view across the city, out over Dublin Bay, and as far north as Howth Head.

We continued on through the Dublin Mountains into Co Wicklow, and a descending mist made our minds up for us when it came to continuing on towards the Sally Gap or down into Glencree.

At Glencree, council workers were out cleaning up the roads in advance of tomorrow’s Remembrance Service at the German War Cemetery, organised by the Lutheran Church.

As the sun was setting behind us, we followed the road down into Enniskerry, and then along the banks of the Vartry and the Dargle into Bray, where we parked on the seafront, and walked along the beach as darkness was closing in.

Despite the encroaching evening darkness, there was a number of families on the pebbled beach, and the sound of the tumbling, beating waves echoed all along the shore. 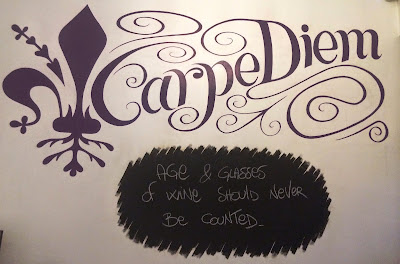 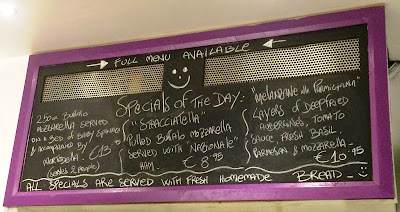 Signs and wonders … in chalk in Carpe Diem in Bray late this afternoon (Photographs: Patrick Comerford, 2014)

We had two double espressos and Italian cakes in Carpe Diem, the coffee, wine and mozzarella bar that opened earlier this year on Albert Avenue. It is so authentically Italian that we were amused by some of the blackboard signs and entertained by conversations in Italian at the bar, between customers and staff.

Perhaps they were amused or entertained by San Marino’s amazing international performance against Estonia this afternoon. After the defeats of Ireland at the hands of Scotland last night and Greece at the hands of the Faroe Islands, football is not bringing a smile to my face at the moment. But it was a delight to get a taste of Italian summer in the middle of the Irish winter this evening.

After walking back up to the Main Street to spend some time browsing in Dubray bookshop and to buy the Guardian and the Economist, we had one more stroll along the promenade in the dark, enjoying the sound of the winter waves on the shore. 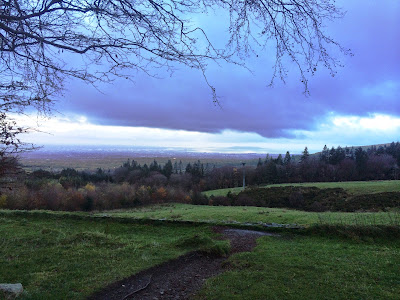