A day to celebrate in
sunshine and sunset 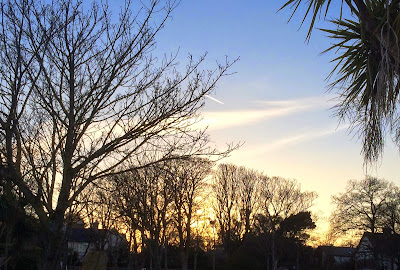 This has been a thrilling and entertaining day for all rugby fans. At the end of the first half, Italy was just a point behind Wales (14-13), and it appeared they might be no pushover. But everything changed in the second half, and watching a more than convincing victory for Wales (61-20), watching the Irish match against Scotland could have been a nail-biting experience. Thankfully, in the end, it was a glorious victory for Ireland (40-10).

The English team seemed to have an impossible task ahead of them. In the end, they might just have closed that margin – one more converted try would have allowed England to clinch that vital one-point margin ahead of Ireland. But as the final whistle blew at Twickenham, England’s margin (55-35) was not enough despite England having a splendid victory.

For Ireland, England and Wales to end up on eight points each, with everything hanging on those tight point differences (63-57-53), has left many breathless – in all three nations.

This is Ireland’s second consecutive Six-Nation title, and it was the best-ever Irish victory in Murrayfield. After the sad performance against Wales and the disappointing Irish exit from the Cricket World Cup, this is a wonderful Irish victory. How should I celebrate? 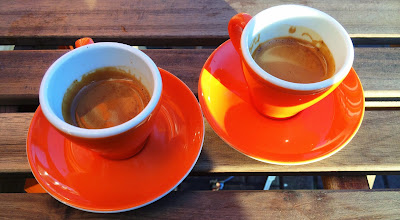 It has been a beautiful spring day all day. Despite cold bite in the air, there have been clear blue skies and strong bright sunshine. I left my phone on to follow the England-French match as two of us headed out to Greystones, Co Wicklow, for a very late lunch at the Happy Pear and two celebratory double espressos.

The Happy Pear was closing as we left and walked down to the Burnaby Estate, where the amber sun was setting behind the trees. 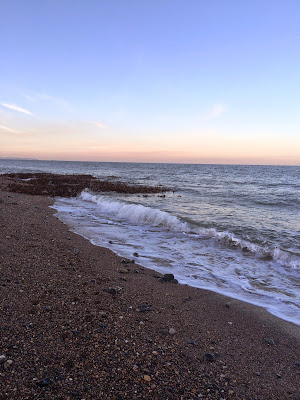 Evening lights on the beach at Greystones this evening (Photograph: Patrick Comerford, 2015)

We continued on under the railway line, and out onto the beach, where a few families were still enjoying the evening lights. Out to the east, in the Irish Sea, the lights thrown by the setting sun against the horizon left beautiful hues of purple, pink and orange between the sea and the sky.

On the way out of Greystones, the final whistle had blown at Twickenham. I stopped close to the Kilruddery Estate, south of Bray, to catch the lights of the lingering sunset to the west behind the outlined edges of the Wicklow Mountains. A residual pink and orange glow remained in the clear sky all the way back through north Wicklow and south Dublin.

What a beautiful day. 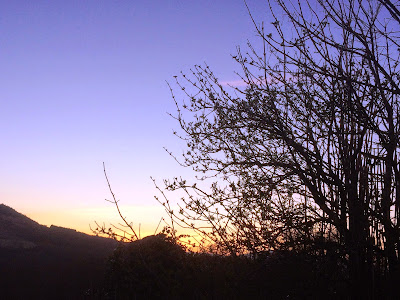 Sunset in the Wicklow Mountains seen from the Kilruddery Estate near Bray, Co Wicklow, this evening (Photograph: Patrick Comerford, 2015)

Through Lent with Vaughan Williams (32):
‘There’s a Friend for Little Children’ 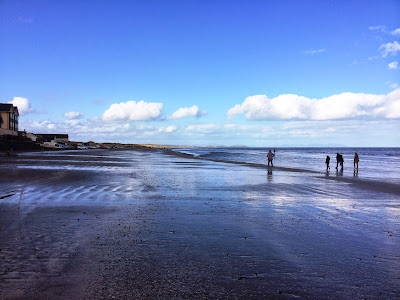 For the last two days, I have been listening to the hymns by Bishop William Walsham How, ‘For All the Saints’ and ‘It is a thing most wonderful’ which were set by Vaughan Williams to the tunes Sine Nomine and Herongate.

This morning [21 March 2015], I invite you to continue in this mode, listening to another hymn that is associated with the decision by Vaughan Williams to use the title ‘Herongate’ for the second of these hymns. I am listening to ‘There’s a Friend for Little Children’ which he set to the tune ‘Ingrave’ in the English Hymnal (No 607) in 1906.

He transcribed the tune in 1903 when he heard a song after a visit to Ingrave Rectory, about three miles from Herongate and near Brentwood in Essex.

Early in 1903, Kate Bryan, the founder and headmistress of Montpelier House School in Brentwood, Essex, organised a series of extra-mural classes under the auspices of Oxford University. She set up an organising committee that included Georgiana Heatley, the daughter of the Revd Henry Davis Heatley, Vicar of Ingrave, a nearby village.

Vaughan Williams was one of the first lecturers. Over a six-week period that Spring, he gave a series of weekly lectures on folk songs, and Lucy Broadwood sang some songs as illustrations for some of his lectures.

Georgina Heatley was inspired by these lectures and took the initiative to collect folk songs among the older inhabitants of Ingrave. She passed these songs on to Vaughan Williams, and later she and one of her sisters invited him to a tea at their father’s vicarage organised by the Vicar for the old people of the village. Vaughan Williams was invited to hear some of the villagers sing, but on the day, Thursday 3 December 1903, they could not be persuaded to co-operate. Nevertheless, Vaughan Williams went to visit Charles Potiphar at his home in Ingrave the next day (Friday 4 December 1903).

The old man was standing in his smock against the door frame of his cottage, and launched into singing his favourite song, Bushes and Briars and several other traditional songs.

This moment has been described as Vaughan Williams’s “moment of epiphany,” his visit to this humble labourer’s cottage sparked Vaughan Williams’s passion for folk songs, and the thought that these songs could be lost forever turned him instantly into one of the greatest folk song collectors of the 20th century.

The encounter led to the use of folk song tunes in the English Hymnal and as a source of inspiration for some of the most notable English classical music of the first half of the 20th century, including his three Norfolk Rhapsodies and In the Fen Country

He returned to Ingrave in January and in February 1904, and over the next few months he spent weeks collecting songs as he cycled around Ingrave, Willingale, Little Burstead, East Horndon and Billericay, jotted the folk songs down with pencil and paper.

Another villager in Ingrave, the singer Mary Ann Humphreys, also provided many tunes for Vaughan Williams, However, Vaughan Williams did not collect any songs from her until April 1904.

In January 1905, he collected songs around the King’s Lynn district of Norfolk and while he was on holiday in Sussex and Yorkshire later that year. In 1906, he visited Samuel Childs at the Bell, Willingale, noting down ‘Sweet Primroses.’

Charles Potiphar died in 1909. Shortly after his death, Vaughan Williams made a recording on wax cylinders of Mary Ann Humphreys singing, including a stately and lyrical performance of Bushes and Briars and a lively and rhythmic rendering of Tarry Trousers. Vaughan Williams collected 12 other songs from Charles Potiphar, and went on to collect some 810 songs in a 10-year period.

Meanwhile, in 1913 Essex County Council took over Montpelier House School as the nucleus of Brentwood county high school, and Kate Bryan died in 1917.

Three years before his death, in 1955, Vaughan Williams revisited Brentwood and recalled his first visit to the Essex town and the neighbouring villages that had such a profound effect on his music. In 2003, to mark the centenary of his visit to Ingrave, the Essex Record Office mounted an exhibition, ‘That precious legacy.’

Sue Cubbin of Brentwood, Essex Sound and Video Archive Assistant at the Essex Record Office, published her book That Precious Legacy - Ralph Vaughan Williams and Essex folksong, in 2006. In this book, she traces the composer’s early links with Essex and sketches his time in the Brentwood area. Her book is available from the Essex Record Office ISBN 978-1-898529-05 price £5.99 (Contact 01245 244644).

This morning’s hymn was written in 1859 by Albert Midlane (1825-1909), a businessman and Sunday School teacher from Newport in the Isle of Wight, and it was first published that year in Good News for the Little Ones. It was set to the tune ‘In Memoriam (Stainer)’ by Sir John Stainer for Hymns Ancient and Modern (1875).

The hymn’s sentiments are so mawkish today and its theology so dated that it is no longer included in the major collections of hymns, but the tune remains an important part of the story of Vaughan Williams and how he collected folk tunes for the English Hymnal over 100 years ago.

There’s a Friend for little children
above the bright blue sky,
a Friend who never changes,
whose love will never die;
our earthly friends may fail us,
and change with changing years,
this Friend is always worthy
of that dear Name he bears.

There’s a rest for little children
above the bright blue sky,
who love the blessèd Saviour,
and to the Father cry
a rest from every turmoil,
from sin and sorrow free,
where every little pilgrim
shall rest eternally.

There’s a home for little children
above the bright blue sky,
where Jesus reigns in glory,
a home of peace and joy
no home on earth is like it,
nor can with it compare;
for everyone is happy
nor could be happier there.

There’s a crown for little children
above the bright blue sky,
and all who look for Jesus
shall wear it by and by;
a crown of brightest glory,
which he will then bestow
on those who found his favour
and loved his Name below.

There’s a song for little children
above the bright blue sky,
a song that will not weary,
though sung continually;
a song which even angels
can never, never sing
they know not Christ as Saviour,
but worship him as King.

There’s a robe for little children
above the bright blue sky,
and a harp of sweetest music,
and palms of victory.
All, all above is treasured,
and found in Christ alone:
O come, dear little children
that all may be your own.