Sailing for another city? CP Cavafy’s ‘The City’ 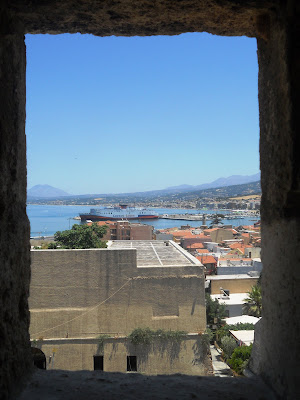 Sailing for another city? A view across the old town of Rethymnon from the Venetian Fortezza (Photograph: Patrick Comerford)

Cavafy was born in Alexandria 29 April 1863 (17 April Old Style), and died in the same city on 29 April 1933. His most important poetry was written after his 40th birthday. He published 154 poems, but dozens more remained incomplete or in sketch form.

Following a conversation last week with someone who was contemplating moving from one appointment to another, but perhaps for the wrong reasons, I found myself re-reading Cavafy’s poem ‘The City’ last night.

Cavafy meant his readers to read this poem first, as though ‘The City’ is a gateway by which we may enter his works. Yet none of his poems is as simple or as complicated as ‘The City,’ and despite its simplicity, it continues to baffle translators.

Some verses in this poem simply cannot be rendered in other languages; in other cases the word order loses its poetic quality, its simplicity or its meaning when it turned around in translations. There are problems too with voice, syntax and double-meanings, and the way in which Cavafy interweaves demotic Greek and Katharevousa Greek.

In the Greek, the desperate relentlessness of the poem is represented in the way the rhyming couplets and the iambic rhythms churn together.

In the original, all the rhymes are full rhymes, and the pattern is a-b-b-c-c-d-d-a. Because it is an inflected language, Greek generates rhymes more naturally and abundantly than English. The first and last line of each stanza rhymes variations of the words for “sea” (thalassa) and for “wasted” (xalassa), clamps the poem shut into its own locked labyrinth.

The ‘city’ that the poet cannot escape has become an albatross around his neck. The city represents his secrets, his sexuality, his heritage, or whatever cross he has had to carry with him throughout his life. He cannot leave Alexandria, nor is Alexandria going to leave him as long he lives.

Perhaps the poet himself is regretting his life of failure and is blaming the city for this failure, wondering whether another city would have been more rewarding. But he realises that it is not the city that is to blame, for all cities will be the same.
If we move from one place to another, from one relationship to another, from one job to another, from one parish to another, without dealing with the problems we have been faced with, we move for the wrong reasons and we take our unresolved problems and our unanswered questions with us, so that we find we are living in the same place, in the same parish, in the same relationship, and our dreams keep turning to nightmares, locking us in so that we keep repeating our mistakes and our failures continue to confront and to haunt us.

You said: “I’ll go to another country, go to another shore,
find another city better than this one.
Whatever I try to do is fated to turn out wrong
and my heart lies buried as though it were something dead.
How long can I let my mind moulder in this place?
Wherever I turn, wherever I happen to look,
I see the black ruins of my life, here,
where I’ve spent so many years, wasted them, destroyed them totally.”

You won’t find a new country, won’t find another shore.
This city will always pursue you. You will walk
the same streets, grow old in the same neighbourhoods,
will turn gray in these same houses.
You will always end up in this city. Don’t hope for things elsewhere:
there is no ship for you, there is no road.
As you’ve wasted your life here, in this small corner,
you’ve destroyed it everywhere else in the world.