I was writing earlier this week about Napoleon’s great-nephew, ‘Prince’ Louis Clovis Bonaparte (1859-1894) was the managing director of the Stony Stratford to Wolverton Steam Tramways Company. But the man who was singularly responsible for saving the tram line was Sir Herbert Samuel Leon (1850-1926), the stockbroker, financier and Liberal politician who is best remembered as the main figure in the development of the Bletchley Park estate near Milton Keynes.

Herbert Leon was born in Islington on 11 February 1850, the second son of George Isaac Leon (1820-1885), a London stockbroker, and Julia Ann Samuel (1826-1901). He was a prominent figure in a nexus of Jewish grandee families at the turn of the 19th and 20th centuries, including the Rothschild, Montefiore, Sebag, Samuel, Spielmann and Leon families.

In 1883, Herbert Leon bought the Bletchley Park estate, which I visited today. The estate, located conveniently beside the LNWR rail line, extended to over 300 acres. He extended the existing red-brick farmhouse and enlarged it over the next few years, making his mansion at Bletchley Park the Leon family’s main home. He objected to the nearby church bells and so grew trees between the house and church to absorb some of the noise, although, seemingly, he did not object to the noise of mainline steam trains.

At that time, business deals on the American Stock Market were considerably enhancing the family fortune and the Leon family bought holiday homes at Broadstairs in Kent and Ballater in Scotland, as well as owning a house in London. 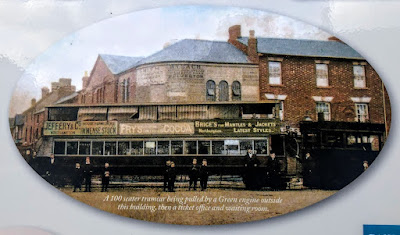 The days of the Stony Stratford to Wolverton tram line are recalled on the corner of London Road and High Street in Stony Stratford (Photograph: Patrick Comerford, 2022)

Herbert Leon was instrumental in saving the Wolverton and Stony Stratford Tramway when it ran into financial difficulties in 1891. The Bedford Syndicate was headed by Leon and traded as Wolverton & Stony Stratford & District Tramways Company.

The Bedford Syndicate reopened the line on 20 November 1891. Gradually the shares were transferred to Leon until he held a controlling interest, but members of the Field family who were also associated with him in the purchase retained their holdings and Alfred Long Field was managing director and secretary of the company until he died in 1913.

Meanwhile, Leon was elected Liberal MP for Buckingham in a by-election on 28 May 1891 after his predecessor, Sir Edmund Hope Verney (1838-1910), a nephew of Florence Nightingale, was expelled from the House of Commons when he was jailed for procuring a girl under 21 for ‘immoral purposes’. Leon was re-elected in 1892, but was defeated in the 1895 general election. He stood for Parliament once more in 1906, but was unsuccessful in Handsworth, Staffordshire.

Leon was High Sheriff of Buckinghamshire in 1909 and was made a baronet in George V’s coronation honours in 1911.

Over the years, Leon acquired many plots of land that he donated for public and educational uses. He gave the land for Leon Recreational Ground to the local council as a public park for the youth of Fenny Stratford and Bletchley. He also donated land near Bletchley for schools for the local children of the Lakes Estate.

He died on 23 July 1926 and is buried at Willesden Jewish Cemetery. Two months earlier, in May 1926, the tram between Stony Stratford and Wolverton had its last run and closed after 39 years.

Lady Fanny Leon continued to live at Bletchley Park until she died on 23 January 1937 after being ill for some time. The members of the Leon family had their own family homes, and after her death none of them wanted to live in Bletchley Park. So the house, park and farm were sold at auction by Knight Frank and Rutley.

The property developer Captain Hubert Faulkner planned to demolish the buildings and sell the land as a housing site. But the Government Code and Cypher School, then based in London, needed a safer home where its intelligence work could carry on unhindered by enemy air attacks.

At a junction of major road, rail and teleprinter connections to all parts of Britain, Bletchley Park was eminently suitable. Throughout World War II, it was the headquarters of Britain’s codebreaking operations.

Key codebreakers included Ruth Sebag-Montefiore (1916-2015), who found herself working in the main manor house once owned by her great uncle, Sir Herbert Leon.

Leon School and Sports College was built in 1970 on the Lakes Estate in Bletchley and named in Leon’s honour. The school was renamed Sir Herbert Leon Academy in 2012 to honour the works and funding Leon and his wife had brought to the local area.

The family title is now held by the fourth baronet, Sir John Ronald Leon, who is better known as the actor John Standing.

Although Sir Herbert Leon was not a practising Jew, he had a Jewish funeral in Willesden and members of the Leon family continued to marry into prominent Jewish families like the Raphaels and Montefiores over several generations.

He identified with secular Jews, and for almost a decade he chaired the Rationalist Press Association (1913-1922), then the leading organisation for humanists, agnostics and atheists. Yet, during his life he was the most prominent Jewish figure in Stony Stratford and in the area that would become Milton Keynes, and he was one of the most prominent Jews of his generation in the United Kingdom.

Bletchley Park, the home of Sir Herbert Leon and his family from 1883 until 1937 (Photograph: Patrick Comerford, 2022)

The second window in the north wall in Saint Mary and Saint Giles Church, Stony Stratford, is by NHJ Westlake, in memory of the Revd John William Spark (Photograph: Patrick Comerford, 2022)

The Calendar of the Church of England in Common Worship today (18 November 2022) remembers Elizabeth of Hungary, Princess of Thuringia, Philanthropist (1231), with a Lesser Festival.

Elizabeth was born in 1207, the daughter of a king of Hungary. She married Louis IV, Landgrave of Thuringia, and they had three children. Theirs was a happy marriage but after four years her husband died of the plague. Elizabeth was driven from the court and she settled in Marburg. There her confessor was Conrad of Marburg, but was domineering and sadistic, and she suffered mental and physical abuse from him. Still, Elizabeth joined the Franciscan Third Order, and cared for the poor, cooking and cleaning for them. She died on this day, just 24 years old, in 1231.

2, A reflection on the stained glass windows in Saint Mary and Saint Giles Church, Stony Stratford;

Throughout this week, I am reflecting each morning on the stained glass windows in the Church of Saint Mary and Saint Giles, Stony Stratford, Buckinghamshire.

The 12 windows in Saint Mary and Saint Giles include a two-light window at the west end by Charles Eamer Kempe, depicting three archangels; a set of three windows in the south gallery, among them important work by John Groome Howe of the Hardman studios; two separate windows in the south gallery that appear to include fragments from an earlier window; and six windows – three below the gallery on the south wall and three below the gallery on the north wall – by NHJ Westlake of Lavers & Westlake.

The second window in the North Wall in Saint Mary and Saint Giles is dated 1889. It is by Nathaniel Westlake and was commissioned by the Stony Stratford architect Edward Swinfen Harris (1841-1924), whose works, mainly in the Arts and Crafts style, can be seen throughout the town.

This is second of two sets of windows in memory of the Revd John William Spark, who was the assistant curate in Stony Stratford for six years.

This window is of three eyelets and depicts:

The Revd John William Spark was born in 1858, the son of Peter Spark, a farmer of Meldreth, near Whittlesford, Cambridgeshire, and later of Babraham. John Spark was educated at Saint John’s College, Oxford (BA 1880, MA 1885), and was an assistant curate in Stony Stratford for six years. He left £50 in his will towards providing better vestry accommodation, and this money formed the nucleus of a fund for building the new vestries.

This window is the second of two in the church in Spark’s memory. Each panel in this window depicts a good shepherd.

Before going into battle with Goliath, David told Saul how he had risked his life for the sheep in flock, killing lions and bears: ‘… whenever a lion or a bear came, and took a lamb from the flock, I went after it and struck it down, rescuing the lamb from its mouth; and if it turned against me, I would catch it by the jaw, strike it down, and kill it. Your servant has killed both lions and bears … the Lord, who saved me from the paw of the lion and from the paw of the bear, will save me from the hand of this Philistine’ (I Samuel 17: 34-37).

The third panel recalls Abel the Shepherd and his sacrifice: ‘Abel was a keeper of sheep, and Cain a tiller of the ground. In the course of time Cain brought to the Lord an offering of the fruit of the ground, and Abel for his part brought of the firstlings of his flock, their fat portions. And the Lord had regard for Abel and his offering’ (Genesis 4: 2-4).

The panels in this window are asking the parishioners of Stony Stratford to remember the Revd John William Spark, their curate who died a young man, as someone who risked his life for them, who made a perfect sacrifice, and who was a faithful shepherd.

The Sacrifice of Abel (Genesis 4: 2) … a panel in the second window on the north wall in Saint Mary and Saint Giles Church, Stony Stratford (Photograph: Patrick Comerford, 2022)

Lord God,
who taught Elizabeth of Hungary
to recognize and reverence Christ in the poor of this world:
by her example
strengthen us to love and serve the afflicted and the needy
and so to honour your Son, the servant king,
who is alive and reigns with you,
in the unity of the Holy Spirit,
one God, now and for ever.

Faithful God,
who called Elizabeth of Hungary to serve you
and gave her joy in walking the path of holiness:
by this Eucharist
in which you renew within us the vision of your glory,
strengthen us all to follow the way of perfection
until we come to see you face to face;
through Jesus Christ our Lord.

The theme in the USPG Prayer Diary this week is ‘Living Together in Peace.’ This theme was introduced on Sunday, describing the work of PROCMURA, the Programme for Christian-Muslim Relations in Africa. USPG has provided an annual grant to PROCMURA since it started in 1959.

Let us pray for the success of the Protestant University of Central Africa’s Master of Arts programme in Islam and Christian-Muslim Relations.

Inside Saint Mary and Saint Giles, looking east … the church was rebuilt by Francis Hiorne in 1776-1777 (Photograph: Patrick Comerford, 2022)