‘Threescore and ten I can remember well:
Within the volume of which time I have seen
Hours dreadful and things strange …’ 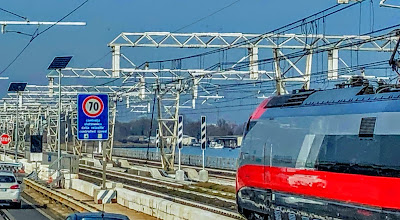 Moving on at 70 … ‘but I am not a rat, and neither am I in any race’ (Photograph: Patrick Comerford)

The King James Version of the Bible tells us: ‘The days of our years are threescore years and ten’ (Psalm 90: 10). Other translations can lack the elegant cadences and rhythms of the Authorised Version, so that the NRSV, for example, says: ‘The days of our life are seventy years.’

Thankfully, the Psalter in the 2004 edition of the Book of Common Prayer of the Church of Ireland retains a poetic approach to translation, and reminds us: ‘The days of our life are three score years and ten.’

‘and if by reason of strength they be fourscore years,
yet is their strength labour and sorrow;
for it is soon cut off, and we fly away.’

Or, as the Psalter in the Book of Common Prayer puts it, ‘or if our strength endures, even four score, yet the sum of them is but labour and sorrow; for they soon pass away and we are gone.’

Does this mean that living to the age of 80 entails much difficulty and pain?

Many Biblical turns of phrase found in the King James Version were picked up by Shakespeare. In Macbeth in 1605, for example, we have:

Threescore and ten I can remember well:
Within the volume of which time I have seen
Hours dreadful and things strange; but this sore night
Hath trifled former knowings.

I have reached that benchmark of ‘threescore years and ten,’ and I have been reminded in recent weeks by some friends of this story that pops up every now and then on social media platforms, including Facebook pages:

I asked a friend who has crossed 70 and is heading towards 80 what sort of changes he is feeling in himself? He sent me the following:

1, After loving my parents, my siblings, my spouse, my children and my friends, I have now started loving myself.

2, I have realised that I am not ‘Atlas’. The world does not rest on my shoulders.

3, I have stopped bargaining with vegetable and fruit sellers. A few cent more is not going to break me, but it might help the poor fellow save for his daughter’s school fees.

4, I leave my waitress a big tip. The extra money might bring a smile to her face. She is toiling much harder for a living than I am.

5, I stopped telling the elderly that they’ve already told that story many times. The story makes them walk down memory lane & relive their past.

6, I have learned not to correct people even when I know they are wrong. The onus of making everyone perfect is not on me. Peace is more precious than perfection.

8, I have learned not to bother about a crease or a spot on my shirt. Personality speaks louder than appearances.

9, I walk away from people who don’t value me. They might not know my worth, but I do.

10, I remain cool when someone plays dirty to outrun me in the rat race. I am not a rat and neither am I in any race.

11, I am learning not to be embarrassed by my emotions. It’s my emotions that make me human.

12, I have learned that it’s better to drop the ego than to break a relationship. My ego will keep me aloof, whereas with relationships, I will never be alone.

13, I have learned to live each day as if it’s my last. After all, it might be my last.

14, I am doing what makes me happy. I am responsible for my happiness, and I owe it to myself. Happiness is a choice. You can be happy at any time, just choose to be!

To all these, I would add one more that is, perhaps, the summary of all that has gone before:

15, Take time, as often as you can, to tell those you love that you love them. And listen to those who tell you that they love you, whatever words or deeds they use to say this.

Why can’t we practice this at any stage and age?

With the Saints through Christmas (32):
26 January 2022, Saint Paul’s Cathedral, Valletta 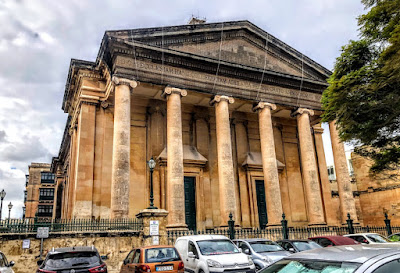 I am in Dublin Airport this morning, catching a flight to Birmingham to attend to some family matters. But, before a busy day begins, I am taking some time early this morning for prayer, reflection and reading.

This week, I am continuing to reflect on saints and their association with prominent churches or notable street names in Malta, which I visited last week. Yesterday (25 January 2022) was the Feast of the Conversion of Saint Paul, and I was looking Saint Paul’s Church at Saint Paul’s Bay, on the north coast of Malta. I am continuing to look at Maltese connections this morning (26 January), reflecting on a visit to Saint Paul’s Co-Cathedral (Anglican) in Valletta last week.

The cathedral was commissioned by the Dowager Queen Adelaide during a visit to Malta in the 19th century, when she learned there was no place of Anglican worship on the island. Before her visit, Anglican services were held in a room in the Grand Master’s Palace.

Saint Paul’s was built on the site of the Auberge d’Allemagne, or the conventual home of the German Knights Hospitaller. The cathedral was designed by William Scamp and was built in 1839-1844.

Queen Adelaide laid the foundation stone on 20 March 1839 and her banner hangs above the choir stalls. The original plans were designed by Richard Lankasheer. However, when the building proved unstable, work had to resume on plans by William Scamp in 1841. Scamp's designs located the altar on the west side of the church, but the Bishop of Gibraltar had a more conservative view. The designs were altered, and Scamp designed an apse inside the great doors to hold the sanctuary on the east side.

The cathedral is a landmark in Valletta, thanks to its spire rising to a height of over 60 metres, and is clearly visible in the Marsamxett Harbour.

During World War II, the cathedral suffered minor damage and the roof collapsed, but most of the structure remained intact. During restoration works, the original designs by Scump started to take shape. A quire and rood screen were built on the west side of the cathedral. A pulpit was also incorporated with the screen dedicated to Sir Winston Churchill.

The organ above the entrance to the cathedral came from Chester Cathedral. The one-manual instrument was built in 1684 by Bernard Smith. There is a long-held tradition that it was played by George Frederick Handel when he was on his way to Dublin for the first public performance of his Messiah. It is said Handel carried out some final rehearsals to fine-tune some of the choruses in Chester Cathedral in 1742. The organ has been changed and rebuilt several times, most recently by Kenneth Jones of Dublin.

The painting behind the High Altar, Ecce Homo, is the work of AE Chalon and was donated in 2014. The oak panels around the High Altar are a memorial to the Allied units that took part in the defence of Malta in 1940-1943. Twelve flags in the aisles represent, among others, the Royal Air Force, the British Merchant Navy, and the Royal Navy.

The new chancery was dedicated by Archbishop Geoffrey Fisher of Canterbury on 2 December 1949 in the presence of Princess Elizabeth. The east side of the cathedral was then transformed into a baptistry.

The undercroft was built from the remains of the basement of the Auberge d’Allemagne, but was never used. Bishop Nugent Hicks of Gibraltar opened the undercroft as a new parish hall in 1928. Ten years later, it was transformed into a gas-proof air raid shelter in 1938. The shelter was used in the early days of World War II by the chaplain, his wife and scores of Maltese citizens.

A project to restore Saint Paul’s Cathedral and the steeple was launched five years ago, with the aim of raising €3 million. When I visited the cathedral last week, much of the building was still covered in cladding and scaffolding.

Saint Paul’s Cathedral is listed on the National Inventory of the Cultural Property of the Maltese Islands. 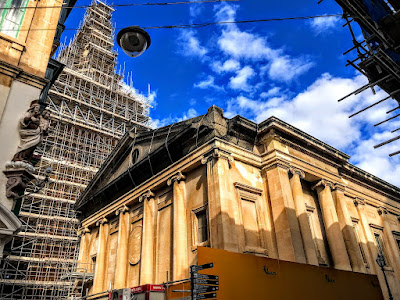 1 Again he began to teach beside the lake. Such a very large crowd gathered around him that he got into a boat on the lake and sat there, while the whole crowd was beside the lake on the land. 2 He began to teach them many things in parables, and in his teaching he said to them: 3 ‘Listen! A sower went out to sow. 4 And as he sowed, some seed fell on the path, and the birds came and ate it up. 5 Other seed fell on rocky ground, where it did not have much soil, and it sprang up quickly, since it had no depth of soil. 6 And when the sun rose, it was scorched; and since it had no root, it withered away. 7 Other seed fell among thorns, and the thorns grew up and choked it, and it yielded no grain. 8 Other seed fell into good soil and brought forth grain, growing up and increasing and yielding thirty and sixty and a hundredfold.’ 9 And he said, ‘Let anyone with ears to hear listen!’

10 When he was alone, those who were around him along with the twelve asked him about the parables. 11 And he said to them, ‘To you has been given the secret of the kingdom of God, but for those outside, everything comes in parables; 12 in order that

“they may indeed look, but not perceive,
and may indeed listen, but not understand;
so that they may not turn again and be forgiven”.’ 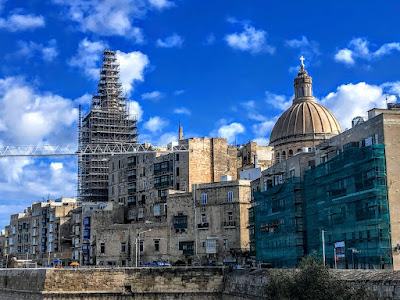 Saint Paul’s Cathedral is a landmark in Valletta, thanks to its spire rising to a height of over 60 metres and clearly visible above the Marsamxett Harbour (Photograph: Patrick Comerford, 2022)

The Prayer in the USPG Prayer Diary today (26 January 2022) invites us to pray:

Today is the feast of both Saint Timothy and Saint Titus. May we discern our roles in the Church and commit to them, whether in positions of leadership or as faithful members of the laity. 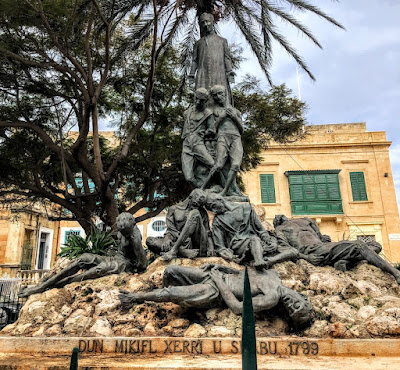 Posted by Patrick Comerford at 06:15 No comments: