‘And, flower-lulled in sleepy grass,
Hear the cool lapse of hours pass’ 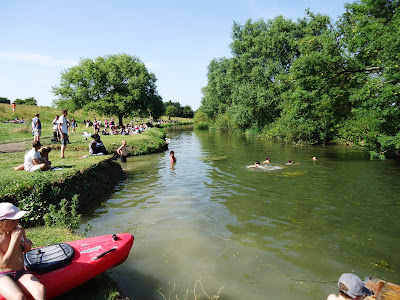 A day for families and for fun by the Granta at Grantchester Meadows (Photograph: Patrick Comerford, 2013)

I only know that you may lie
Day long and watch the Cambridge sky,
And, flower-lulled in sleepy grass,
Hear the cool lapse of hours pass,
Until the centuries blend and blur
In Grantchester, in Grantchester

This warm, dry, sunny weather is the sort of English summer weather my mind associates with boats, punting, riverside picnics, village cricket, walks through broad meadows, sipping Pimms in the afternoon, and sipping cool white wine in the balmy evening as darkness closes in ever so slowly.

Just for one wandering moment last week I thought I would get to this year’s Pilgrimage to Little Gidding, which took place yesterday [Saturday 13 July], a little later than usual. It began at 10.30 at Leighton Bromswold with a celebration of the Eucharist, and after lunch they walked to Little Gidding, with several stops or stations for prayer and rest, before arriving at Little Gidding at about 4.30 for prayers around the tomb of Nicholas Ferrar, followed by Choral Evensong.

Simon Kershaw had even been kind enough to offer me a lift if I could get to Huntingdon, and to find someone who could give me a lift back to Cambridge.

But I arrived too late in the morning, and instead the choice facing me yesterday was to find some cricket to watch as I lazed in the sun, or to go for a walk by the river.

I managed both in the afternoon … and instead of TS Eliot and Little Gidding, it was Rupert Brooke and Grantchester.

It was early afternoon, and I had a book with some poems by Rupert Brooke in my hand when I caught the bus that leaves Drummer Street, beside Christ’s Pieces, every hour for Grantchester. 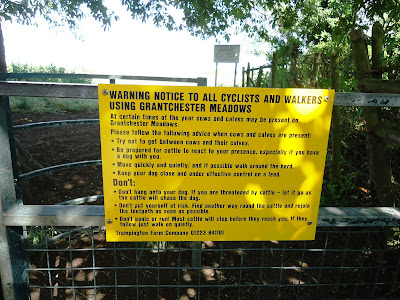 It took no more than 10 or perhaps 15 minutes for the No 18 to get to Grantchester Meadows, where Sylvia Plath once read poetry to the cows. She would tell her mother: “I never had such an intelligent, fascinated audience.”

Grantchester has attracted poets throughout the centuries. Chaucer sets the Reeve’s Tale in Grantchester and Trumpington. Before he swam the Hellespont, Byron swam in Byron’s Pool, where the River Rhee and the Bourn Brook join to form the Cam or Granta, the river that gives Cambridge and Grantchester their names.

Rupert Brooke also swam in Byron’s Pool when he was staying at the Old Vicarage, a house that was bought in 1979 by Jeffrey Archer. 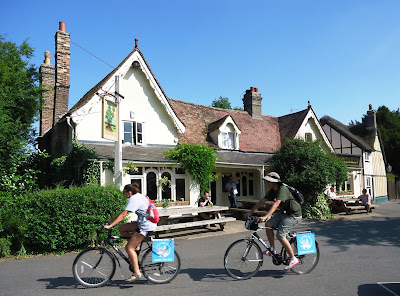 Strolling through the village, with its four quaint pubs and its numerous white-washed thatched cottages with neatly kept flower gardens, I returned again to Granchester Meadows and the banks of the river, where families were sharing picnics and people ones and twos were exploring the river in kayaks and on punts.

The walk along the river bank eventually came to end at the Old Vicarage and a open grass space behind The Orchard, where a game of village cricket had more players that spectators.

I lingered a little while until play stopped for tea – or was it Pimms? – and then returned to the village and visited the Church of Saint Andrew and Saint Mary. The early history of the parish church is lost in the mists of time. Scraps of Saxon stonework and Roman tile point to its origins in antiquity. 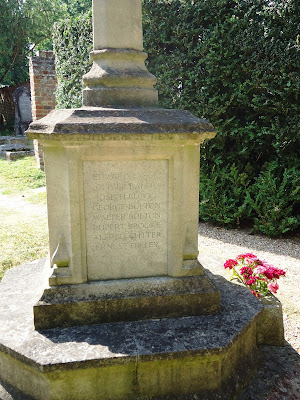 Rupert Brooke’s name on the war memorial in the churchyard (Photograph: Patrick Comerford, 2013)

Outside in the churchyard, Rupert Brooke’s is one of the four earliest names on one panel at the base of the war memorial.

These laid the world away; poured out the red
Sweet wine of youth; gave up the years to be
Of work and joy, and that unhoped serene,
That men call age; and those who would have been,
Their sons, they gave, their immortality.

The queues of tourists at The Orchard were too long, the tables were crowded, and the small Rupert Brooke Museum was closed by the time I got there. 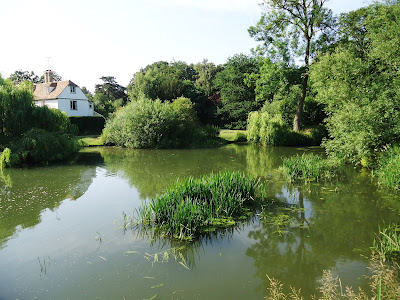 I walked on past the Old Vicarage, and the Mill House, once the home of Alfred North Whitehead who worked there with Bertrand Russell, who in turn argued there with Wittgenstein, and the Mill Pool, where the river splits and forms an island. 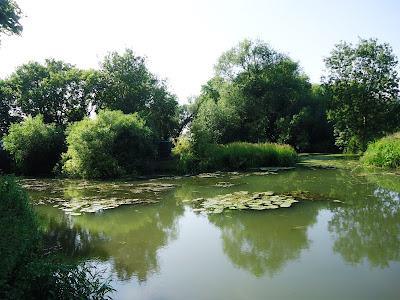 Crossing the river a second time, I followed the path along the east bank south through a nature reserve to Byron’s Pool. Brooke swam her often, and one occasion swam naked here with Virginia Woolf at midnight ... or so she boasted to Vita Sackville-West.

Along the river, some people were walking their dogs, here and there a man or two was fishing, a couple were paddling around in two kayaks, and one young student had got into the water at Byron’s Pool, not to emulate Byron or Brooke, he told me, but simply because it was such a hot day and because the water was cool and refreshing.

The river marks the boundary between Grantchester and Trumpington. I rejoined the road, and walked on to Trumpington, where there is a pub called the Lord Byron. But I stopped to eat instead in the beer garden at the Green Man, before catching a bus on Trumpington High Street back to Drummer Street in Cambridge.

This was a very English Saturday afternoon ... an afternoon in the England that Brooke imagined soldiers missed so much in the trenches that he wrote:

If I should die, think only this of me:
That there’s some corner of a foreign field
That is forever Engand. ...

Brooke died on 23 April 1915 on a hospital ship moored off Skyros in Greece on his way to the Gallipoli landings. He was buried that night in an olive grove on Skyros. 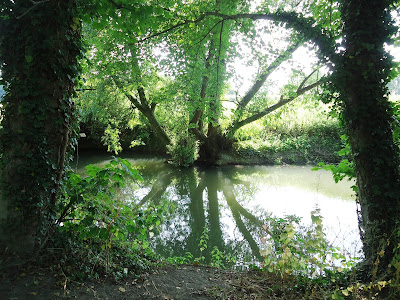 The trees, their branches and their reflections in the water near Byron’s Pool appear to create their own web (Photograph: Patrick Comerford, 2013)

Posted by Patrick Comerford at 07:30 2 comments: