Evening lights in Donabate and Coballis 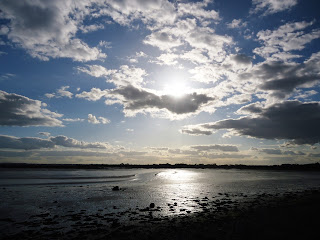 Evening sunlight on the marshes south of Corballis on the Donabate peninsula (Photograph: Patrick Comerford, 2013)

Despite the showers yesterday and warnings that the rain could continue today, there was some beautiful spring sunshine while I was in the garden this morning. The temperature managed to reach 16, which I am told is the figure that prompts people automatically to want to sit outside, without even realising that their bodies are reacting in this way.

Cutting back ivy and clearing away overgrowing clematis is demanding work. By early afternoon, it was obvious there were better ways to take advantage of the Spring weather that is being doled out in small measures, and better ways of responding to the symptoms of sarcoidosis that appear to have been flaring up a little in the past week and misbehaving. 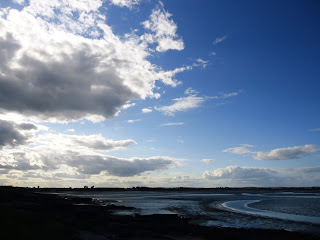 The Burrow Beach at Portrane this afternoon (Photograph: Patrick Comerford, 2013)

By mid-afternoon, after a light lunch, two of us were on our way to Portrane and the Fingal coast.

The tide was out, and despite some white clouds there was a bright blue sky. After a short time with my Lynders cousins at The Quay, we decided to go south and have a walk on Balcarrick Beach in Donabate. 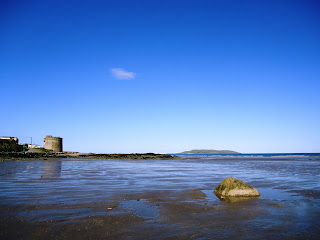 The tide was out, there were pools of bright water in the ripples, and a man on his own was working his way through the sands with a metal detector. What was he looking for? Coins? A lost wedding ring? An engagement ring? Did he find anything at all?

There were clear views to Lambay Island off the coast, around to Ireland’s Eye and Howth Head, and south to the Sugarloaf and the Wicklow Mountains.

Instead of returning through Donabate village, we took the road south through Corballis Golf Club and Balcarrick Golf Course, and drove to the southern tip of the peninsula, and then, leaving the Island Golf Club behind us, continued along a narrow coast road at Corballis Cottages, with views across the marshes and Broadmeadow towards Malahide to the south.

The sun was still high in the sky to the west, but the clouds sharpened the glow of the rays on the marshlands below – a few minutes earlier, a few minutes later, and the beauty of this moment would have passed.

A little later, we were back on the main road from Donabate, close to the gates of Newbridge House.

Oh for some summer sunshine. 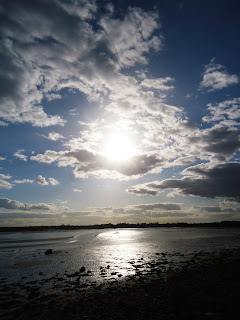