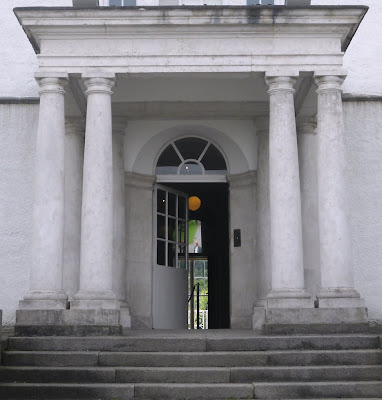 The entrance to Rathfarnham Castle this afternoon (Photograph: Patrick Comerford, 2012)

I had lunch today with a friend and former Irish Times colleague in Rathfarnham Castle, halfway between home and work.

We sat in the Stuart and Chambers Tearooms overlooking the lawns at the back of the castle, which was built in 1583 for Adam Loftus, the Elizabeth Archbishop of Dublin and first Provost of Trinity College Dublin.

I am writing a paper on Loftus at the moment, and it was a good exercise for the imagination this afternoon to recall almost four and a half centuries of life that the castle has witnessed. At the same time, my friend was recalling a retreat during his schooldays, when Rathfarnham Castle was a house of studies for the Jesuits ... lunch with an Anglican archbishop and the Jesuits in one afternoon.

With its four flanker towers, Rathfarnham Castle is a fine example of an Irish fortified house. In the late 18th century, the house was remodelled by two of the finest architects of the day, Sir William Chambers and James ‘Athenian’ Stuart, who are recalled in the name that now adorns the tearooms.

Local legend in Rathfarnham says there are two secret tunnels beneath the castle foundations – one leading from the castle to an exit at the present Castle Golf Club and the other lead to the Church of Ireland parish church in the village. However, I find it hard to imagine that Adam Loftus ever had to keep a secret of his visits to his local parish church, or that he ever slipped out of the castle for a quiet round of golf.

The former stables at Rathfarnham Castle, which were used as an accommodation block during the Jesuits’ days here, have been demolished in recent years to make way for a new car park and gardens, although a crumbling wall or a blocked door can still be seen here and there.

Rathfarnham was described as a “waste village” when Loftus bought it. This afternoon it was a quiet place too – perhaps everyone was indoors watching the Irish triumphs at the Olympic Games. 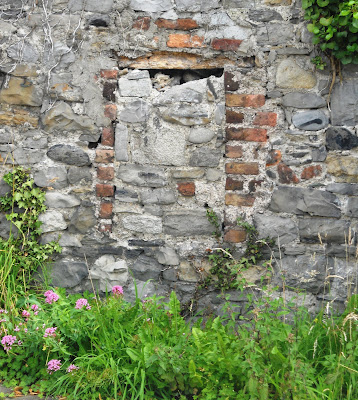 Posted by Patrick Comerford at 19:02 2 comments: