A new book celebrates the life
of Archbishop Donald Caird 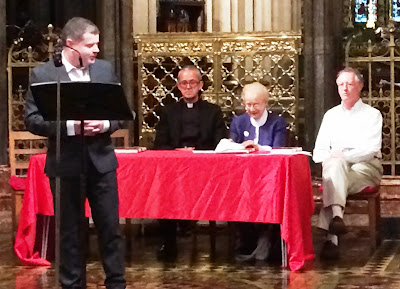 Twenty years ago, Archbishop Donald Caird commissioned me as a Diocesan Reader in Christ Church Cathedral, Dublin, in 1994.

For six years, I served as a Reader in Saint Maelruian’s Parish, Tallaght, working closely with the Revd Robert Kingston, until I was ordained by Archbishop Walton Empey, again in Christ Church Cathedral in 2000.

This evening [26 July 2014], I was in Christ Church Cathedral for the launch of a new and comprehensive biography, Donald Caird: Church of Ireland Bishop: Gaelic Churchman: A Life, by Aonghus Dwane.

The biography, published by Columba Press, was launched by the former President of the Supreme Court, Mrs Justice Catherine McGuinness.

The evening began at 5 p.m. with a service of Urnaí na Nóna (Choral Evensong in Irish), and was followed by the book launch at 6 p.m. and a reception in the south transept.

At the same time, the Cathedral is hosting a new exhibition marking the centenary of Cumann Gaelach na hEaglaise, or the Irish Guild of the Church, founded 100 years ago in 1914. Archbishop Caird is a long-standing member of the guild. 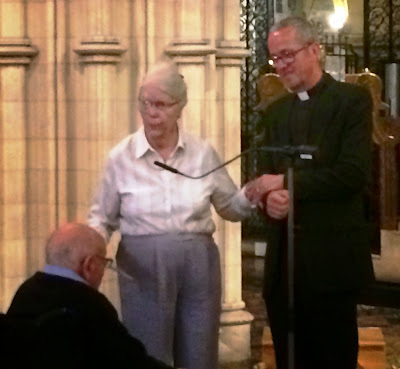 As Dean of Saint Canice’s Cathedral, Kilkenny (1969-1970), Bishop of Limerick, Ardfert and Aghadoe (1970-1976), Bishop of Meath and Kildare (1976-1985), and as Archbishop of Dublin (1985-1996), Donald Caird enjoyed a distinguished career in the Church of Ireland. His lifelong interests in the Irish language and ecumenism mean he is also well-known in wider Irish society.

His time in office, particularly as Archbishop of Dublin, coincided with historic developments in the life of both Church and State, including the great “liberal agenda” debates on contraception, abortion and divorce in the Republic; the ordination of women in the Church of Ireland, and the developing peace process in Northern Ireland.

The broad scope of Donald Caird’s friendships and interests, both North and South gave him unusual insights into many aspects of Irish life. This is a man who had met both Peig Sayers and CS Lewis.

Aonghus Dwane’s generously illustrated-biography traces Donald Caird’s life story from his childhood in Ranelgah and his schooldays in Wesley College, to his early experiences in the Kerry Gaeltacht areas of Dún Chaoin and the Blasket Islands, and his introduction to the Irish Guild of the Church, where he met such figures as Dr Kathleen Lynn, who had taken part in the 1916 Rising.

The book recalls his education in Trinity CollegeDublin and traces his life in the ordained ministry, beginning with a curacy Saint Mark’s, Dundela, CS Lewis’s home parish in Belfast, and a chaplaincy in Portora Royal School in Enniskillen, to taking up episcopal office in 1970.

There are accounts of Pope John Paul II’s visit to Ireland and his meeting with the bishops of the Church of Ireland in 1979. There are anecdotal and warm recollections of Donald's relationships with the late Cardinal Tomás Ó Fiaich and Archbishop Robin Eames. And he is credited with a strong commitment to ecumenism and full minority participation in the institutions of the Republic.

But this is also the story of a private and family man, often told through his own reminiscences and the anecdotes of friends and contemporaries.

The attendance at this evening’s launch included Donald’s wife Nancy and manhy of his family members. There too were his successor in Dublin, Meath and Limerick, Archbishop Wealton Empey, another successor in Limerick, Bishop Edward Darling, Archbishop Rhcard Clarke of Armagh, and the Dean of Christ Church Cathedral, the Very Revd Dermot Dunne, Archdeacon Gordon Linney, Dean Victor Stacey of Saint Patrick’s Cathedral, and many members of the Chapter of Christ Church Cathedral and of Cumann Gaelach na hEaglaise.

I was interested in reading about the work of Faith Alive, the Archbishop’s Commission for the Decade of Evangelism, to which he appointed me in 1990. In recalling Donald’s visits to the Reformed Episcopal Church in Spain, Aonghus also quotes from an ‘Irishman’s Diary’ I wrote for The Irish Times on 3 January 1995.

Aonghus Dwane is an Irish language officer in Trinity College Dublin. Originally from Cork and a graduate in Law from UCC, he was a senior prosecution solicitor with the Director of Public Prosecutions before moving to the Irish language sector in 2005.

He has contributed to many newspapers and journals and was director of the Celtic Revival Summer School in Dublin and the Aran Islands in 2006. He is the deputy chairman of Cumann Gaelach na hEaglaise.