Six million people,
and who’s counting
when they live and die? 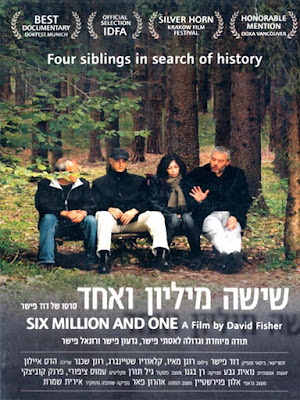 ‘Six Million and One’ by David Fisher tells the story of a filmmaker and his siblings researching the experiences of their late father, who survived the Holocaust

This blog has reached the monumental landmark of six million hits. The 6 million mark was passed earlier yesterday (1 July 2022), and it came as a pleasant surprise.

With this latest landmark figure of 6 million hits, I might ask: what do 6 million people look like?

The Six Million Dollar Man is an American science fiction and action television series, running from 1973 to 1978, about a former astronaut, Colonel Steve Austin, played by Lee Majors. After a NASA test flight accident, Steve Austin is rebuilt with superhuman strength, speed and vision due to bionic implants. He is employed as a secret agent by OSI, a fictional US government office.

But what about six million real people, men, women and children?

Where do they live?

Where are they born?

And … where do they die?

More than 6 million Americans are forbidden to vote because of felony disenfranchisement, or laws restricting voting rights for those convicted of felony-level crimes. The number of disenfranchised individuals has increased dramatically along with the rise in criminal justice populations in recent decades, rising from an estimated 1.17 million in 1976 to 6.1 million today.

Yet, with all these figures, and all these statistics, I cannot associated the figure 6 million with anything other than the six million Jews who were murdered during the Holocaust.

Behind each number, there is a person with a family, a life that has lived through hell and had ended up killed without having done anything, except to be born with the parents they had, born into one religion. All the people who came back from concentration camps said that one of the most horrible thing was the incomprehension, the injustice. They did not know why they were there.

The Nazis were dehumanising the Jews, identifying each one with a number tattooed on their arms as is done with animals, transforming people into numbers. How do we reverse the process and transform numbers back into people?

The Nazis killed methodically, in a scientific way. They asked engineers to find ways to kill people in the quickest and the cheapest way possible. They killed them rationally. But this rationality increases the horror, and is specific to the Shoah.

There is a point where one can no longer represent the horror of the meaning of the number six million.

I.
Sleep faster, my son says. He’s poking
at my eyelids, pulling at the pillows, the helicopter
hum of anticipation rising in his throat as I reach out
and spin him onto the bed. I want to set my heels
once more in the soft underbelly of his childhood,

airlift him from danger, from disease, from all his fears,
which are maybe not even his fears at all, but only mine.
Yet now as he hovers above me, my body splayed out
like my father’s before me, my every breath is less a prayer
than a love letter torn open in desperation.

II.
Remember, I say, when we counted to six million,
a visualization of tragedy, one half hour a day
for two years, and that, for the tribe only; it would take
another whole year for the gypsies, the Catholics, the gays,
the foreigners, the Negroes, the artists, the philosophers, etc.

You were barely six at the time, your mother wondering
what the hell I was thinking, and even now I can’t fathom
why I didn’t just hold you close—
It would have taken only a moment—
And say whatever it was that I really wanted to say.

III. I’m watching Batman reruns when the telephone rings.
Holy Charoset, I yell at the kitchen wall, call back later.
Maybe I threw some raisins, I don’t remember.
We’re already married, your mother and I,
but at the time, don’t ask, I was living alone.

And so I’m laughing, mostly from boredom, but still, laughing,
while my father lay dying, gasping for breath in some dirty gutter,
gunned down for a half-empty briefcase, a gefilte fish sandwich,
and a New York Post which the next day would have
his picture on the twenty-eighth page; one more dead Jew.

IV.
You burst into the room, fifth grade facts burning your tongue
like Moses’ coal. 100 people die every minute, you tell me
as I turn down the TV; and then, gleefully: 50 since I’ve been
in this room, and now 75 and now … O my little census bureau,
my prince of darkness, my prophet of numbers, riddle me this:

how many grains of sand before you can call it a desert? And where were you the day Kennedy was shot? CNN, interrupting,
asks. My grandmother clicks her tongue like she’s chopping onions
in the old country. Poor boy, she says, pointing.
And there’s John-John again, waving that little flag, still saluting.

V.
And who will remember my father when I am gone? And
how many have died since his death? And what’s one more.
or one less. And what do I know of my father’s father?
I’m waiting outside, engine humming, as my son,
eighteen, registers. And now he’s shouting, running towards me, arms pumping above his head.
He’s Moses the moment before spying the golden calf.
He’s his great grandfather crawling underground to freedom.
He’s my father flying medical supplies, surviving the crash.
My mother must have held him close. You’re home, she cries, safe.

Somebody says Egypt now; somebody, Egypt then.
Nobody says suddenly. Nobody says Brooklyn. I’m counting
myself to sleep, when my wife hears a sound at the door. Careful,
she whispers. We’re alone, in an empty house; my every breath
reminding me I’m older than my father, on the day of his death.

VII.
There are more people breathing this very moment, my son insists,
than have ever died. He’s home from college, so I don’t double-check.
He’s driven a long way to surprise me on my birthday. Are you sure
you can’t stay, I ask, holding him close. He looks full of hope;
a woman I’ve never seen before at his side. Welcome home,

I tell my wife. She’s just turned twenty-four. I’m childless,
fatherless. It’s the day of the funeral; Nineteen years until
the twin towers. Three thousand since Moses murdered
the overseer. But that’s not what I’m thinking. One, two, three,
she says, guiding me inside. How could we not fall back in love?

‘Let them be like the grass on the housetops that withers before it grows up’ (Psalm 129: 6) … rooftop gardens in Southwark (Photograph: Patrick Comerford)

Psalm 129 is the tenth in a series of 15 short psalms (Psalm 120-134) known as the ‘Songs of Ascents.’ These psalms begin with the Hebrew words שיר המעלות‎ (Shir Hama’a lot). In the slightly different numbering system in the Greek Septuagint and the Latin Vulgate, this is counted as Psalm 128. It is sometimes known by its opening words in Latin, Saepe expugnaverunt me.

Psalm 129 may date from the post-exilic period, after the year 539 BCE. It was probably a pilgrimage song, sung as people walked to Jerusalem for a major festival.

This is a short psalm eight verses. It is probable that this psalm was composed during a time of trouble, of war, or of persecution. But it is not known why is was included among the ‘Songs of Ascent.’

Psalm 129 depicts the distress of the people in exile. Verses 6-8 may be a lament for the downfall of their present adversaries. It contains no appeal to God for salvation or thanksgiving for an ameliorated situation.

Verses 6-8 depict the transience of the peoples exilic existence. The psalmist likens the people to the roof-top grass that withers rapidly. The rooftop grass evokes the poverty and the landlessness of the people that compel them to utilise their rooftops to grow crops that yield so little that there is almost nothing to harvest.

‘Those who plough ploughed on my back; they made their furrows long’ (Psalm 129: 3) … a sculpture in Kanturk, Co Cork, of Thady Kelleher (1935-2004), World and All-Ireland Ploughing Champion (Photograph: Patrick Comerford)

1 ‘Often have they attacked me from my youth’
—let Israel now say—
2 ‘often have they attacked me from my youth,
yet they have not prevailed against me.
3 Those who plough ploughed on my back;
they made their furrows long.’
4 The Lord is righteous;
he has cut the cords of the wicked.
5 May all who hate Zion
be put to shame and turned back.
6 Let them be like the grass on the housetops
that withers before it grows up,
7 with which reapers do not fill their hands
or binders of sheaves their arms,
8 while those who pass by do not say,
‘The blessing of the Lord be upon you!
We bless you in the name of the Lord!’

The theme this week in the prayer diary of the Anglican mission agency USPG (United Society Partners in the Gospel) has been ‘Ethics and Leadership.’ It was introduced on Sunday by Andy Flannagan, Executive Director of Christians in Politics.

We pray for the grace and honesty to disagree well. May we respect and love each other, starting conversations from a place of care and consideration.