The Dormition or the Assumption?
Debating the meaning of a feast 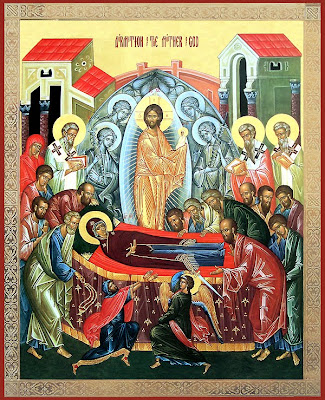 In the Calendar of the Orthodox Church, today [15 August] is the Feast of the Dormition of the Mother of God (Greek: Κοίμησις Θεοτόκου, Koímēsis Theotokos) a Great Feast in the Eastern Orthodox Church that recalls the “falling asleep” or death of the Virgin Mary, the mother of Christ, and her being received into heaven.

Throughout Greece, ‘Panagia’ is the major public holiday and all banks and offices close on 15 August.

For Roman Catholics, it is the Feast of the Assumption, which has particular associations with Ephesus.

Two places in Jerusalem are traditionally associated with the end of the Virgin Mary’s earthly life: a monastery on Mount Zion that is the traditional site of her death or falling asleep; and the basilica in the Garden of Gethsemane, said to be the site of her tomb. However, since the end of the 19th century, Mereyama, 8 km east of Selçuk, has been venerated by many Roman Catholics as the site of Mary’s last earthly home.

Today, undoubtedly, Mereyama will be thronged by thousands of tourists staying in Kuşadasi, the resort near Ephesus where I have stayed regulatly. Few of them may ever know that the commemoration of this feast has different emphases in the Roman Catholic and Orthodox traditions. The Dormition and the Assumption may appear to be different names for the same event – Mary’s departure from the earth – but the beliefs surrounding this day are not actually the same.

The Orthodox Church teaches that Mary died a natural death, like any human being; that her soul was received by Christ upon death; and that her body was resurrected on the third day after her burial, at which time she was taken up, bodily only, into heaven, so that her tomb was found empty on the third day.

On the other hand, Roman Catholic teaching says Mary was “assumed” into heaven in bodily form. Some Roman Catholics agree with the Orthodox that this happened after her death, while others hold that she did not experience death. In his dogmatic definition of the Assumption in Munificentissimus Deus (1950), Pope Pius XII was not so dogmatic, for he appears to leave open the question of whether or not she actually died and even alludes to the fact of her death at least five times.

In the Orthodox tradition, the Virgin Mary died as all people die for she had a mortal human nature like all of us. The Orthodox Church teaches that the Virgin Mary was subject to being saved from the trials, sufferings, and death of this world by Christ. Having died truly, she was raised by him and she already takes part in the eternal life that is promised to all who “hear the word of God and keep it” (Luke 11: 27-28). But what happens to Mary happens to all who imitate her holy life of humility, obedience and love. 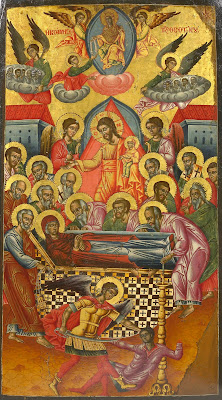 In Rethymnon, my favourite town in Crete, today’s Thursday market was held yesterday [Wednesday, 14 August] because of today’s public holiday. I am looking forward to being back in Rethymnon later this month, perhaps even catching some of the programme for the 26th Renaissance Festival (Αναγεννησιακού Φεστιβάλ) which takes place in Rethymnon from Saturday [17 August] until 1 September. 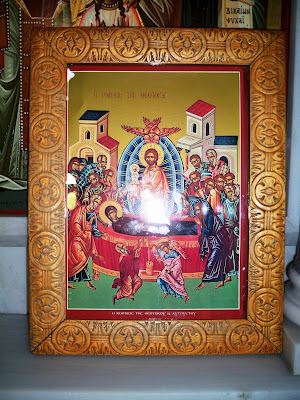 The Dormition ... an icon in a church on the Greek island of Samos (Photograph: Patrick Comerford)

Patrick Comerford is Lecturer in Anglicanism Liturgy and Church History, the Church of Ireland Theological Institute, and a canon of Christ Church Cathedral, Dublin. Much of this material was used in an earlier posting three years ago on 15 August 2010.