A harvest rainbow of hope

An autumn rainbow at The Quay in Portrane this afternoon (Photograph: Patrick Comerford, 2010)

We celebrated our Harvest Thanksgiving at the Cathedral Eucharist in Christ Church Cathedral, Dublin, this morning, with the Dean of Christ Church, the Very Revd Dermot Dunne, preaching.

Our numbers were added to greatly by the a large number of parishioners from the Episcopal Church of Saint Paul and Saint James in Glastonbury, Connecticut, who are on pilgrimage-tour of Ireland, visiting Dublin, Glendalough, Kilkenny, Cashel, Galway and other places this week.

Sitting beside me in my stall in the chapter was their priest, the Revd Nancy E. Gossling. After graduating from Wellesley College in 1974, Nancy had a career in retailing and banking, but left this to focus on being a mother and a volunteer. She has served in leadership roles with the Connecticut Prison Association, a local housing partnership, and a transitional living facility for homeless families.

She is a co-founder of Justice & Mercy, an interfaith agency that focuses on prisons and the criminal justice system. She entered Berkeley Divinity School at Yale in 1997 and received her Master of Divinity degree in 2000. 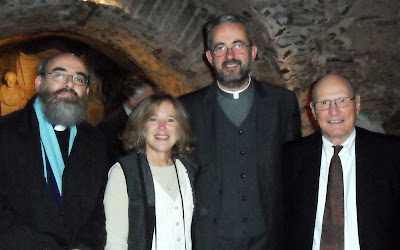 Sitting in the congregation was the retired Bishop of New York, the Right Revd Richard F. Grein, who is part of the pilgrimage group visiting Ireland. Bishop Grein, who was the 14th Bishop of New York, is now bishop-in-residence at Saint Mark’s Episcopal Church in New Canaan, Connecticut, where is wife, the Revd Anne Richards, is priest.

As bishop, he also helped bring US support to the Russian Orthodox Church to rebuild Christ the Saviour Cathedral in Moscow and the Hospital of Saint Alexis. For this work, Dr Grein was made an honorary Metropolitan of the Ecumenical Throne. 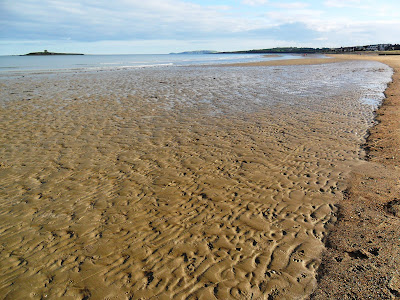 The tide was out in Skerries this afternoon (Photograph: Patrick Comerford, 2010)

After lunch in the city centre, I headed out to Skerries and after stopping in the Olive I went for a walk on the beach. The tide was out, the sun was still shining and it felt warm for this time in autumn, although there were few people on the beach.

After buying the latest edition of the Skerries News and the Sunday papers in Gerry’s, I headed back through Rush and Donabate to Portrane. I had only been there on Friday last for a walk on the beach, but this afternoon from The Quay there was a beautiful rainbow cascading down into the sea south of Lambay Island.

I suppose childhood sayings still remain long after we have rejected their significance. But I still smile when I see a rainbow, seeing it as a reminder that God’s promises are fulfilled.

It’s been a busy week, with the start of the new semester, and a round of meetings. And it’s been a tough week too when it comes to my health – although I’m still sure that while I may have sarcoidosis, sarcoidosis does not have me … and with the harvest, the beach walks and the rainbow, as I head into a new week, I’m confident of God’s promises and I’m looking forward to his autumn.
Posted by Patrick Comerford at 20:37 No comments: