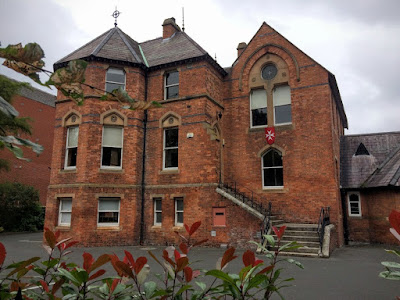 One of the houses that I have admired during my early Sunday morning walks earlier this month around the streets of Ballsbridge is Saint John’s House, now the headquarters of the Knights Hospitaller of the Order of Malta, but built as the vicarage for Saint Bartholomew’s Church.

Until Canon Richard Travers Smith was appointed vicar, the parish had no official residence, and the vicars lived at 15 Wellington Road. The vicarage, dating from 1872-1873, was designed by the architect James Edward Rogers (1838-1896), with additional work in the early 20th century by Sir Thomas Manly Deane (1851-1932).

The foundation stone of the vicarage and the parochial hall was laid on 8 June 1872 by Lady Kilmaine. The building cost was £2,030, two-thirds was borrowed from the Board of Works, £500 came as a gift from Archbishop Whately, and the vicarage was opened on 5 July 1873.

After Woodward’s death in May 1861, Rogers remained for only a short period with the Deanes. He graduated BA from TCD in 1861 and may have set up his own architectural practice in 1862. By 1863, he working from his father’s home at 20 Upper Mount Street.

He was elected a fellow of the Royal Institute of Architects of Ireland (FRIAI) in 1864, and by then he was working from an office at 205 Great Brunswick Street. From 1865, he was living in Cambridge Road, Rathmines, and he was the architect to the Diocese of Meath until the disestablishment of the Church of Ireland in 1869.

By 1870, Rogers had moved to 179 Great Brunswick Street, where William Stirling and James Franklin Fuller also had their offices. Most of his recorded work was in connection with the Church of Ireland, and at this time he designed or worked on churches in Dublin and the west of Ireland. It was during this period that he also designed the new Vicarage on Clyde Road for Saint Bartholomew’s Church.

But Rogers’s abiding interests were drawing and painting in watercolours rather than architecture. He exhibited at the Exhibition of Fine and Ornamental Arts in Dublin in 1861 and at the Royal Hibernian Academy from 1870 on. He was elected elected an associate of the RHA on 4 December 1871.

He was elected a Fellow of the Royal Institute of British Architects (FRIBA) in 1874, proposed by James Franklin Fuller, James Joseph McCarthy and Thomas Newenham Deane. But Rogers resigned as FRIAI in October 1874 and moved to London in 1876. He does not appear to have practised as an architect there, and he resigned his fellowship of the RIBA in 1877. However, he continued to exhibit his paintings at the Royal Hibernian Academy until he died. He also exhibited at the Royal Academy (1881, 1882 and 1884), at the Irish Exhibition in London (1888), and at exhibitions of the Dublin Sketching Club and the Dublin Art Club. 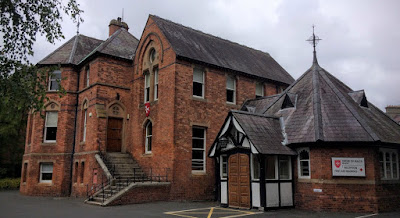 The extension to the right of the entrance front of Saint Bartholomew’s Vicarge was designed by Sir Thomas Manly Deane (Photograph: Patrick Comerford, 2016)

The extension to the right of the entrance front of the vicarage was designed by Sir Thomas Manly Deane (1851-1932). This was his last work, and was completed after he left Ireland.

The architect Sir Thomas Manly Deane was the eldest son of the architect Sir Thomas Newenham Deane (1828-1899). He in turn was a partner of Benjamin Woodward, and their great works included the Museum at Trinity College, Dublin, the Oxford University Museum of Natural History, the Pitt Rivers Museum, Oxford, the Kildare Street Club, Dublin, and Queen’s College Cork, later University College Cork.

Thomas Manly Deane was born in Ferney, Co Cork. While he was a student at Trinity College Dublin, he also studied architecture as his father’s pupil and on graduating in 1872 was apprenticed to William Burges in London.

Burges thought highly of Deane’s work, and in 1875 he commissioned him to illustrate his personal copy of Tennyson’s poems. Deane returned to Ireland at the end of 1875 to spend a year in his father’s office. In 1876, he won a Royal Academy Travelling Studentship that enabled him to spend almost a year and a half in Italy (1877-1878). On his return to Dublin, he began practicing as a partner in his father's firm, and in 1879 he designed the decoration of the ceiling and walls of the sanctuary in Saint Bartholomew’s Church. 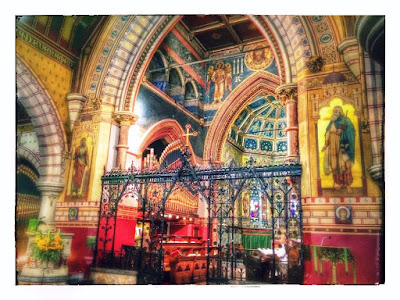 In 1879, Thomas Manly Deane designed the decoration of the ceiling and walls of the sanctuary in Saint Bartholomew’s Church (Photograph: Patrick Comerford)

His decorative work in Saint Bartholomew’s drew on his visits to Pisa, Florence, Sienna, Assisi, Perugia, Rome, Naples, Pompeii and Palermo, and this work was completed over the next few years.

On Saint Patrick's Day 1888, he married Florence Mary, daughter of James Frederick Wright, a Dublin barrister, and they had two children.

In 1904, Deane was appointed co-architect with Aston Webb for the new College of Science and Government Buildings in Upper Merrion Street, Dublin. He was elected to the Royal Hibernian Academy (RHA) in 1910, and he was knighted the following year when the College of Science was opened in 1911.

After his only son, Second Lieutenant Thomas Alexander David Deane of the Royal Marine Light Infantry, was killed at the Dardanelles on 3 May 1915, Deane resigned from the RIAI and undertook little further architectural work. In 1919, he designed a proposed war memorial chapel, vestry room and baptistery in Saint Bartholomew’s Church, but this scheme was abandoned. Perhaps the most important building of his later years was the War Memorial Hall and Reading Room at TCD. In those closing years of his career, he also designed the War Memorial near the railway station on Quinsborough Road, Bray, designed as Celtic cross of Tullamore limestone and unveiled in March 1920.

His son, Thomas Alexander David Deane, is named on the War Memorials in the High School Dublin, Woodenbridge, Co Wicklow, as well as the memorials designed by his father in TCD, Bray and Saint Bartholomew’s.

His son’s death in World War was emotionally devastating for Deane. Eventually, he stopped stopped working as an architect and moved from his home at 2 Ailesbury Park in 1923, retiring to Wales. His last works were an a new wing for Saint Mary’s Convent of the Community of Saint Mary on the corner of Pembroke Park and Clyde Road and his extension to the Vicarage at Saint Bartholomew’s on Clyde Road. The completion of the extension to the vicarage was supervised by RM Butler after he left. Deane died in Wales on 3 February 1933. 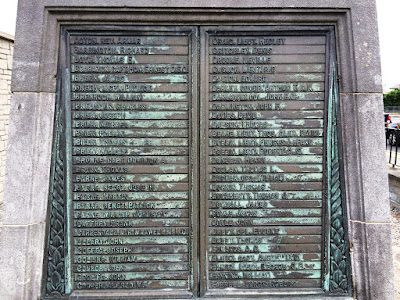 Thomas Alexander David Deane is named on the War Memorial designed by his father near the railway station on Quinsborough Road, Bray (Photograph: Patrick Comerford, 2016)

Posted by Patrick Comerford at 07:30 3 comments: