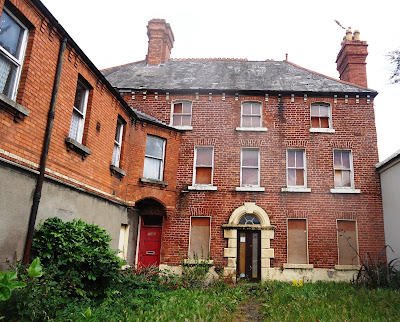 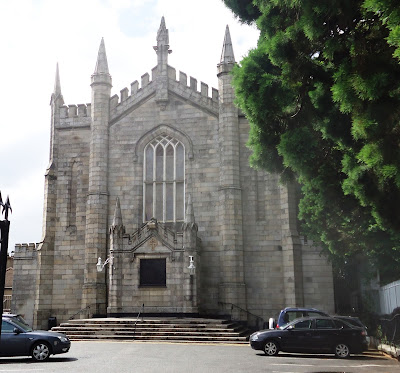 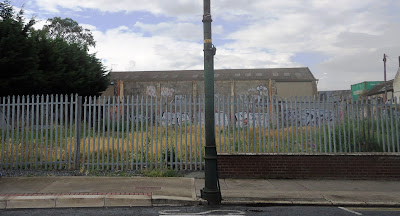 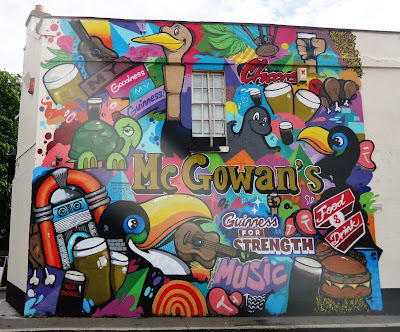 Posted by Patrick Comerford at 21:46 6 comments: 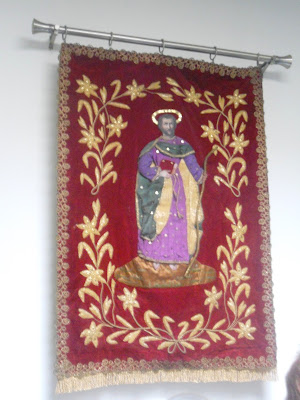 A banner of Saint James of Compostella in a side chapel in Saint James’s Church, Dublin (Photograph: Patrick Comerford)

Today [25 July 2013], Saint James is commemorated in the calendar of the Church of Ireland and in the Book of Common Prayer.

Last year, during the Camino or Pilgrim Walk around the inner city churches in Dublin, marking the International Eucharistic Congress, the fourth church for those following the route to have our “Pilgrim Passports” stamped was Saint James’s Church in Saint James’s Street.

The foundation stone of the church was laid in 1844 by Daniel O’Connell. But the church claims a link with the tradition linking this part of Dublin – Saint James’s Gate – with the Camino de Santiago de Compostella since the 12th century.

In a side chapel, there is a banner of Saint James of Compostella, and Irish pilgrims on the Camino have their Pilgrim Passports stamped here before they set out for Spain.

Across the street, the former Church of Ireland parish church of Saint James, which was designed by Joseph Wellard, has been closed for many years. Until recently, it was a shop and showrooms. Now it is vacant, and it looks sad and forlorn behind padlocked gates. 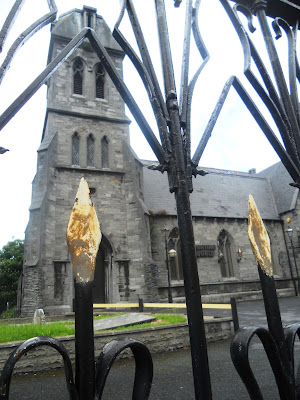 1 The word that the prophet Jeremiah spoke to Baruch son of Neriah, when he wrote these words in a scroll at the dictation of Jeremiah, in the fourth year of King Jehoiakim son of Josiah of Judah: 2 Thus says theLord, the God of Israel, to you, O Baruch: 3 You said, ‘Woe is me! TheLord has added sorrow to my pain; I am weary with my groaning, and I find no rest.’ 4 Thus you shall say to him, ‘Thus says the Lord: I am going to break down what I have built, and pluck up what I have planted – that is, the whole land. 5 And you, do you seek great things for yourself? Do not seek them; for I am going to bring disaster upon all flesh, says the Lord; but I will give you your life as a prize of war in every place to which you may go.’

1 When the Lord restored the fortunes of Zion, •
then were we like those who dream.
2 Then was our mouth filled with laughter •
and our tongue with songs of joy.
3 Then said they among the nations, •
‘The Lord has done great things for them.’
4 The Lord has indeed done great things for us, •
and therefore we rejoiced.
5 Restore again our fortunes, O Lord, •
as the river beds of the desert.
6 Those who sow in tears •
shall reap with songs of joy.
7 Those who go out weeping, bearing the seed, •
will come back with shouts of joy,
bearing their sheaves with them.

27 At that time prophets came down from Jerusalem to Antioch. 28 One of them named Agabus stood up and predicted by the Spirit that there would be a severe famine over all the world; and this took place during the reign of Claudius. 29 The disciples determined that according to their ability, each would send relief to the believers living in Judea; 30 this they did, sending it to the elders by Barnabas and Saul.

1 About that time King Herod laid violent hands upon some who belonged to the church. 2 He had James, the brother of John, killed with the sword.