Saint Nicholas: a role model for priests and bishops 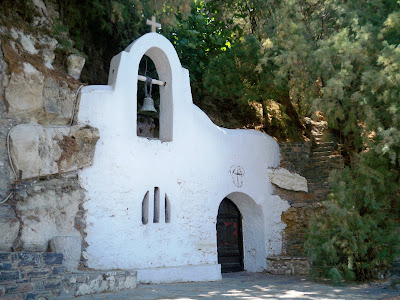 An old church in Aghios Nikólaos ... a reminder of how the Christian faith and the Christmas message have survived since the days of the first ‘Santa Claus’ (Photograph: Patrick Comerford, 2010)

Today, 6 December, the Church commemorates Saint Nicholas, Bishop of Myra, one of the fathers of the Council of Nicaea, and the role model for Santa Claus.

Saint Nicholas (Άγιος Νικόλαος, Aghios Nikólaos, “Victory of the People”) was Nicholas of Myra in Lycia, now known as Demre, near Antalya in present-day Turkey. Because of the many miracles associated with Saint Nicholas, he is also known as Saint Nicholas the Wonderworker. He had a reputation as a secret giver of gifts, such as putting coins in the shoes of those who left them out for him, and because of this, perhaps, was transformed into our present-day Santa Claus.

According to legend, as a young man Nicholas was sent as a student to Alexandria. During the sea voyage from Myra and Alexandria, he is said to have saved the life of a sailor who fell from the ship’s rigging in a storm. In one version of the story, on their arrival back in Myra Nicholas took the sailor to church. The previous Bishop of Myra had just died, and the freshly-returned, heroic Nicholas was elected his successor.

Another story tells how in the middle of a famine, a butcher lured three little children into his house, slaughtered and butchered them, and put their bodies in a pork barrel to sell them off as meat pies. Saint Nicholas, who heard of the butcher’s horrific plans, raised the three boys back to life from the barrel through his prayers.

The best-known story about the bishop tells how a poor man had three daughters but could not afford a proper dowry for them. This meant that they would remain unmarried and probably end up as prostitutes. Hearing of their plight, Nicholas secretly went to their house under the cover of dark and threw three purses filled with gold, one for each daughter, through the window or down the chimney.

Saint Nicholas, Defender of the Church

Personally, I prefer the stories that link Saint Nicholas with the defence of true Christian doctrine. In the year 325, the Emperor Constantine convened the Council of Nicaea to debate the nature of the Holy Trinity. It was one of the early Church’s most intense theological questions. Arius from Alexandria was teaching that Jesus Christ was the Son of God but was not equal to God the Father.

As Arius argued his position at length, it is said that Nicholas became agitated to the point that he could no longer bear the attacks on what he believed was essential to the faith. The outraged Nicholas got up, crossed the room, and slapped Arius across the face!

Constantine ordered his release, and promptly reinstated Nicholas as Bishop of Myra. As the debate continued, the Council of Nicaea agreed with his views, deciding against Arius, and agreeing on the Nicene Creed, which remains the symbol of our faith.

From Myra to Ireland

Saint Nicholas ... said to be the oldest parish church in the west of Ireland (Photograph: Patrick Comerford)

In the past twelve months or so, I have visited Aghios Nikolaos in Crete, and three churches named after Saint Nicholas: in Galway, Dundalk, Co Louth, and Adare, Co Limerick.

Christopher Columbus named a port in Haiti after Saint Nicholas on 6 December 1492 – perhaps recalling his stop-off in Galway on his way to the New World, and prayers in Saint Nicholas Collegiate Church.

In eastern Crete, I visited the harbour town of Aghios Nikólaos (Άγιος Νικόλαος), which is in an attractive location on the Gulf of Mirabello. The town is built around an inner lagoon, Voulismeni, which is surrounded by palm trees and cafés. Modern hotels and apartments may dwarf surviving older buildings, but it is still a charming place, and local people love trying to convince visiting tourists that the lake is bottomless. 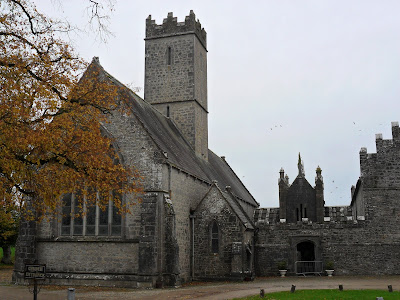 As Christmas approaches, I think of Saint Nicholas as the bishop who cared for the poor, was the patron saint of children and seafarers, the generous and benevolent dispenser of gifts, the defender and rescuer of children in distress and poverty and who were in danger of exploitation and abuse, and the defender of Orthodox Christian doctrine.