Two reminders in Rathmines of close
links between Ireland and Greece 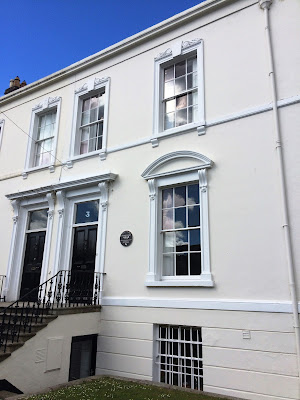 No 3 Prince Arthur Terrace, Rathmines … one of the childhood homes of Lefcadio Hearn (Photograph: Patrick Comerford, 2015)

I was strolling through Rathmines earlier this morning, when my imagination was caught by the beautiful architecture of some of the Georgian houses on Leinster Square and Prince Arthur Terrace.

These fine houses were designed mainly by John de Courcy Butler. In 1830, Butler and his neighbour Arthur Williamson, leased adjoining pieces of land near the south corner of Rathmines Road and the future Leinster Road. Between 1830 and 1837 they built six houses each to form Leinster Terrace.

Then in 1838, Butler leased the two adjoining plots to the east of Ormond Villa and Berlin Cottage, on which he built Ulster Terrace and Connaught Terrace. Eventually these developments were renamed Leinster Square and they were renumbered consecutively.

Both Leinster Square and Prince Arthur Terrace have houses that were childhood homes of the writer Patricio or Patrick Lafcadio Hearn.

Lafcadio Hearn was the son an Irish father and a Greek mother, and spent much of his childhood in the various Dublin homes of his aunt Sarah Brenane, including Leeson Street, Leinster Square and Prince Arthur Terrace.

He was given his unusual middle name because he was born on 27 June 1859 on the island of Santa Maura, also known as Lefkas, Levkas or Lefkada, in the Ionian Islands.

His father, Charles Bush Hearn (1818-1866), from Clara, Co Offaly, was an Irish-born naval surgeon and the grandson of a Church of Ireland Archdeacon of Cashel; his mother was a Greek woman, Rosa Antoniou Kassimatis. They met when Charles was stationed on the island of Cerigo or Kythira, where he was stationed.

The couple eloped and they were married in a Greek Orthodox Church on 25 November 1849. Patrick Lefcadio Hearn, their second son, was born on 27 June 1850, and he was baptised Patricios Lefcadios Hearn (Πατρίκιος Λευκάδιος Χερν) in Aghia Paraskevi Church.

When his father was reassigned from the Ionian Islands to the West Indies the following year, his mother brought the child to Dublin and they moved into the home of her mother-in-law, Elizabeth Hearn, at 48 Lower Gardiner Street, where she was living with her daughters Susan and Jane.

When Charles Hearn returned to Dublin in October 1853, another child was conceived and was named Daniel James Hearn. However, the marriage collapsed, and when Rosa left Dublin for Kefalonia their marriage was annulled on a technicality.

Rosa later married Giovanni Cavallini, a Greek citizen of Italian descent who became the British appointed Governor of the tiny island of Antikythera (Cerigotto). She died in Corfu in 1882. 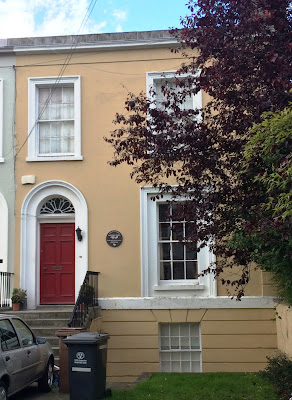 No 21 Leinster Square, Rathmines … one of the childhood homes of Lefcadio Hearn (Photograph: Patrick Comerford, 2015)

Meanwhile, the young Patrick Lefcadio Hearn had moved into the home of his grandmother’s sister, Sarah Brenane. She was the widow of Captain Justin Brenane and had converted to Roman Catholicism, and the child lived with her in Rathmines, first at 3 Prince Arthur Terrace and later at 21 Leinster Square, before moving on to 73 Upper Leeson Street.

From the age of 19 he lived in the US, and wrote widely about New Orleans. However, he is best known for the years he spent in Japan. In 1890, he moved to Japan and adopted the Japanese name Koizumi Yakumo.

He is credited with introducing many Westerners to the life and culture of the Japanese, including their ghost stories, lyric forms, religion and customs. He is particularly noted with being one of the first Westerners to translate and appreciate the ancient Japanese form of the haiku.

Lefcadio Hearn died of a heart attack on 26 September 1904 at the age of 54 and he was buried in Zoshigaya Cemetery, Tokyo, after a Buddhist funeral according to the rites of the Jodo Sect of Zen Buddhism at Jitoin Kobudera Temple, Ichigaya.

Apart from the two plaques I saw in Rathmines this morning, there is a another plaque at 73 Upper Leeson Street and a fourth Irish plaque in Dunmore East, Co Waterford, where he spent many childhood holidays.

As I photographed these plaques this morning, I was reminded of yet another close connection between Ireland Greece as the future of Greek finances hangs in the balance. 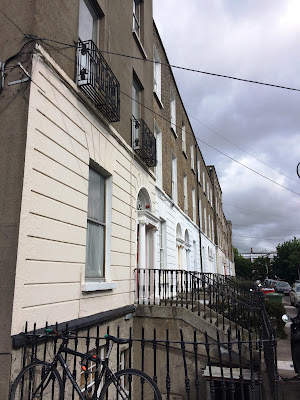 The houses on Prince Arthur Terrace and Leinster Square were developed by John de Courcy Butler and Arthur Williamson between 1830 and 1857 (Photograph: Patrick Comerford, 2015)