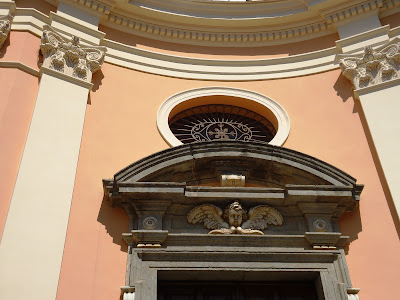 An angel over the door of a church in the Sorrento peninsula (Photograph: Patrick Comerford, 2013)

I am staying for a week in Sorrento, looking out on the Bay of Naples. I have been told that the Bay of Naples was so popular with visitors from Ireland and England throughout the 19th century that many of these merchants, seamen, diplomats and people on the Grand Tour died in Naples and Sorrento. So many, in fact, that the English Cemetery (Il Cimitero degli Inglesi or Il Cimitero acattolico di Santa Maria delle Fede) was opened for them in near Piazza Garibaldi in Naples.

The cemetery opened thanks to the British Consul, Sir Henry Lushington, who bought land within the gardens of the church of Santa Maria della Fede for a Protestant cemetery in 1826, and it continued to be used for burials for most of the century until 1893.

Among the Irish people buried there are: 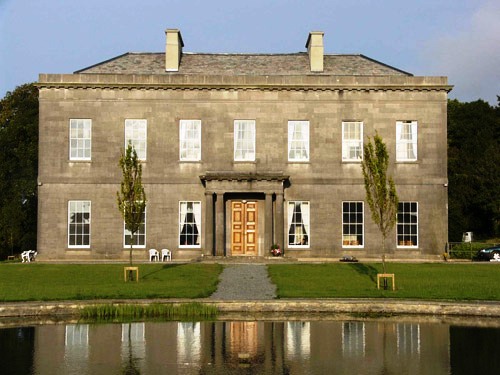 Townley Hall, near Drogheda ... the family home of Bishop Francis Balfour, who was born in Sorrento

But if Irish people were dying and being buried in this part of Italy in the 19th century, Irish people were also being born here to Irish people who were living in Naples and Sorrento. One whose story I find fascinating is Francis Richard Townley Balfour, an Anglican missionary bishop who was born in Sorrento on 21 June 1846, but who remained confident of his Irish identity throughout his life.

The family home, Townley Hall, is a magnificent Georgian mansion built in 1799on a hilltop setting. Townley Hall is a masterpiece in the classical style of Francis Johnston, the foremost Irish architect of his day. Today it is surrounded by 60 acres of rolling parkland overlooking the Boyne Valley, close to the site of the Battle of the Boyne.

Sir John Betjeman, in a survey of the works of Francis Johnston wrote: “I have seen many Irish houses, but I know none at once so dignified, so restrained and so original as Francis Johnston’s Townley Hall.”

The two brothers went to school in Harrow, Balfour went to school at Harrow, where the younger students included a future Archbishop of Canterbury, Randall Thomas Davidson (1848-1903), a future secretary of the SPG, Bishop Henry Hutchinson Montgomery (1847-1932) from Co Donegal, the slum priest Father Robert Dolling (1851-1902) from Co Down, and a much younger Bishop Charles Gore (1853-1932), whose parents were from Ireland.

From Harrow, Balfour went on to Trinity College Cambridge, receiving his BA in 1869. He then trained for ordination at Cuddesdon College, Oxford. In 1872, the year he received his MA from Cambridge, he was ordained deacon, and he was ordained priest in 1874 by the Bishop of Oxford.

He was curate of Buckingham for three years until 1875, and then moved to Southern Africa as a missionary with the Society for the Propagation of the Gospel (SPG), now Us, the new name for USPG.

He first worked in the Orange Free State, as a bishop’s chaplain, on the diamond diggings with the miners in Kimberley, lecturing in a theological college in Bloemfontein, and as a parish rector and cathedral canon. He then went to Mashonaland in Rhodesia (now Zimbabwe), where he built the first Anglican Church in Fort Salisbury (now Harare).

When he was consecrated in Cape Town as an Assistant Bishop for the Diocese of Bloemfontein in 1911, he was effectively the first Anglican Bishop of Lesotho.

He was proud of his Irish identity and heritage, and there is a wonderful photograph of him from 1914 (not to hand here) in a mitre and cope decorated in shamrocks and “Celtic” designs.

When Balfour retired in 1923, there was no question of going to Sorrento. He returned to Ireland, but died shortly afterwards in Shankill, Co Dublin, on 3 February 1924. He is buried in the grounds of Mellifont Abbey, Co Louth – the ruins of Mellifont had been owned by his family for generations.