Waiting without hope and without love:
drawing parallels between Eliot and Cohen 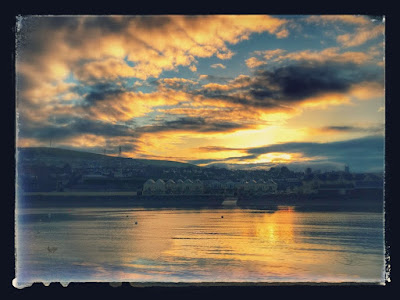 ‘So the darkness shall be the light, and the stillness the dancing’ … evening lights in Wicklow Harbour last week (Photograph: Patrick Comerford, 2017)

The students are back and the new academic semester begins in earnest for the full-time students this morning [16 January 2017].

But the new semester actually began on Friday evening, with the return of the students who are following the MTh programme through the part-time mode.

I finished teaching the part-time module on Anglicanism on Saturday morning with an exploration of ‘Anglican Culture,’ especially through the work of poets and writers such as TS Eliot, Samuel Johnson, Rose Macaulay and Julian of Norwich, and with references too to John Betjeman, Susan Howatch and Catherine Fox, and even Philip Larkin, including ‘Church Going,’ and his grieving of the changing place of the Church in English life, and Carol Ann Duffy and her work with English cathedrals.

I read from a number of TS Eliot’s poems, including ‘The Waste Land,’ ‘The Hollow Men,’ ‘Ash Wednesday,’ ‘Journey of the Magi’ – well, we are still in the Season of Epiphany – and ‘Little Gidding.’

Perhaps the greatest challenge came from some lines in the third canto in ‘East Coker’:

I said to my soul, be still, and wait without hope
For hope would be hope for the wrong thing; wait without love
For love would be love of the wrong thing; there is yet faith
But the faith and the love and the hope are all in the waiting.
Wait without thought, for you are not ready for thought:
So the darkness shall be the light, and the stillness the dancing.

‘East Coker’ is the second poem of TS Eliot’s Four Quartets. He finished this poem in February 1940, and it was published in March that year in the Easter edition of the New English Weekly.

The title refers to a small village that was Eliot’s ancestral home, and later his ashes were placed in Saint Michael’s Church, the local parish church, where a plaque reads partly: ‘In my beginning is my end … In my end is my beginning.’

In this poem, Eliot discusses time and disorder within nature that is caused by humanity following only science and not God. The lines that some people found difficult to read are in this passage:

O dark dark dark. They all go into the dark,
The vacant interstellar spaces, the vacant into the vacant,
The captains, merchant bankers, eminent men of letters,
The generous patrons of art, the statesmen and the rulers,
Distinguished civil servants, chairmen of many committees,
Industrial lords and petty contractors, all go into the dark,
And dark the Sun and Moon, and the Almanach de Gotha
And the Stock Exchange Gazette, the Directory of Directors,
And cold the sense and lost the motive of action.
And we all go with them, into the silent funeral,
Nobody’s funeral, for there is no one to bury.
I said to my soul, be still, and let the dark come upon you
Which shall be the darkness of God. As, in a theatre,
The lights are extinguished, for the scene to be changed
With a hollow rumble of wings, with a movement of darkness on darkness,
And we know that the hills and the trees, the distant panorama
And the bold imposing facade are all being rolled away—
Or as, when an underground train, in the tube, stops too long between stations
And the conversation rises and slowly fades into silence
And you see behind every face the mental emptiness deepen
Leaving only the growing terror of nothing to think about;
Or when, under ether, the mind is conscious but conscious of nothing—
I said to my soul, be still, and wait without hope
For hope would be hope for the wrong thing; wait without love
For love would be love of the wrong thing; there is yet faith
But the faith and the love and the hope are all in the waiting.
Wait without thought, for you are not ready for thought:
So the darkness shall be the light, and the stillness the dancing.

So often we wait on God but think we are waiting in hope when in fact we are waiting with a shopping list we have composed, confuse this with prayers, and confuse what we think are our prayers with hope.

Eliot’s concept of waiting without hope and waiting without love is a more open approach to God that reflects some of the concepts of prayer found in the writings of Saint Teresa of Avila and Saint John of the Cross.

But as I read those lines I was also dawn to compare Eliot’s ideas here with the deep ideas expressed by Leonard Cohen in the title track of his final album:

Here Cohen is quoting the Kaddish, the Jewish prayer for the dead (‘magnified, sanctified …’). He addresses God directly as the God who has dealt Cohen out of the game, and who has ignored the ‘million candles’ lit in vain hopes of salvation.

Of course, in ‘Little Gidding’ Eliot ends the Four Quartets with the well-known affirmation by Julian of Norwich: