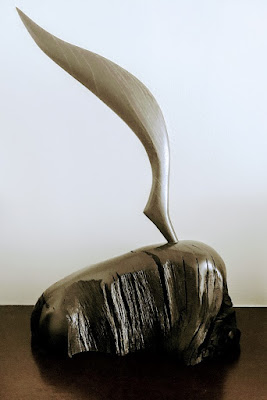 Two schools tell the story of
educational reform in Limerick

On my way into Limerick on the bus from Askeaton earlier this week, I stopped to look at two neighbouring school buildings that tell the story of how an increasing variety of architectural styles was introduced to civic buildings in Limerick as the 19th century unfolded.

The Model School on O’Connell Avenue opened in 1855, as one of many model schools built by the Board of National Education.

This school was designed by Frederick Darley (1798-1872) in what we could describe as an under-stated late Tudor or Jacobean style. By the mid-19th century, this style had already been established throughout Britain as an appropriate style for school buildings, perhaps because it linked 19th century reforms in education with the expansion of education in England in the Elizabethan and Jacobean periods in the late 16th and early 17th centuries.

This Tudor-Jacobean style was noted for details such as the four-centred arch, finials and label mouldings to some of the openings. Of course, it was a vernacular style when it was developed in England at the time. But in Victorian Ireland it stood out as an innovation.

The architect Frederick Darley may be best known in Dublin for his work on the King’s Inns in Henrietta Street and the Royal Hibernian Military School in the Phoenix Park. But he also designed a number of churches in Dublin in a variety of architectural styles, including Trinity Church in Gardiner Street, Saint George’s Church in Balbriggan, the Bethesda Chapel on Granby Row, Saint Laurence’s Church in Chapelizod, Saint Canice’s Church, Finglas, Saint John’s Church, Sandymount, and Saint Stephen’s Church, Mount Street.

His main energies, however, appear to have been devoted to designing model schools and model agricultural schools throughout Ireland for the Commissioners of National Education. His schools in Co Limerick included Mount Trenchard, Newcastle West and Tervoe. But he appears to have designed schools in almost every county in Ireland, from Dunmanway in Co Cork to Ballymena and Dundrod, Co Antrim, from Loughrea and Galway City to Drogheda, Co Louth and the Model Schools in Marlborough Street, Dublin.

Darley’s Model School in Limerick is important because of its architecture and because of its contribution to the cultural life of the city. Model Schools were established in Ireland by the Commissioners for National Education as the basis for a teacher training programme. The first model schools were established in Dublin in 1834. The schools admitted both Roman Catholic and Protestant children. But in 1863, the bishops of the Roman Catholic Church called for a withdrawal of Roman Catholic pupils, saying they were dissatisfied with the religious instruction provided in the schools.

Darley’s Model School in Limerick is a detached multiple-bay two-storey limestone ashlar school, built in 1853-55 around a central courtyard. The street-facing block is an eight-bay two-storey elevation with single-bay breakfront end bays, prolonged to the north and south by two-bay recessed wings. A plaque over the front door reads: ‘Limerick Model National School 1853.’

In 1861, James Higgins Owen carried out additions and alterations. Darley’s original wings forming courtyard to the rear were demolished and replaced around 1990, and his original windows have been replaced in recent years with the uPVC windows. But his building retains a strong character and contributes to the architectural story of this part of Limerick.

He was a pupil of the great Francis Johnston. From 1833 until 1843 he was the Ecclesiastical Commissioners’ architect for the Archdiocese of Dublin. From the 1830s into the 1850s, he was also architect to Trinity College, Dublin. He was also architect to the Royal Dublin Society, the Board of National Education and with the Board of Works. He was one of four architects appointed in 1860 to inspect and report on the restoration of Saint Patrick’s Cathedral, Dublin. 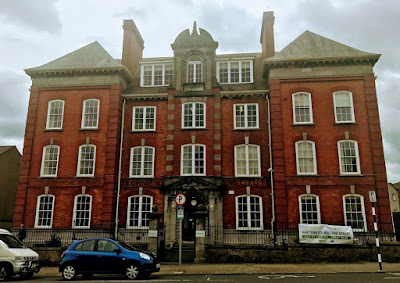 The Municipal Technical Institute on the corner of O’Connell Avenue, built as the Technical Institute, is in the Dutch Baroque Queen Anne style but dates from 1909-1911 (Photograph: Patrick Comerford, 2017; click on image for full-screen view)

Close to Darley’s Model School, the Municipal Technical Institute or Vocational Educational College stands on the corner of O’Connell Avenue and Roden Street. This impressive building is unusual in Limerick, embodying the Dutch Baroque of the Queen Anne style from the late 17th century, which saw a revival in the second half of the 19th century.

It is noticeable for its exuberant Baroque pedimented window that breaks the roofline. It has vertically treated façades, arched windows, a flamboyant doorway and a broken roofline pediment. The scale, proportions and palette of materials are immediately juxtaposed by the sombre limestone façade of the Model School further south.

This building, built in 1909-1911, was designed by William Patrick Ryan (1852-1921), and is an example of the fine limestone work and brickwork jointing that can be seen in buildings of this period in Limerick City. Tenders were invited in October 1909 and the first sod was turned by the Mayor of Limerick on 21 January 1910. The building was ready for occupation in August 1911.

The architect William Patrick Ryan (1852-1921) was the son of John Ryan, a Dublin architect. He was articled to his father and also studied civil engineering at Trinity College Dublin.

However, he did not graduate, and instead he went to Rome, where he fought with the Papal Zouaves on the side of the Papal States against Garibaldi during the Italian War of Unification until 1870. He then enlisted in the French army during the Franco-Prussian war of 1870-1871.

Later, Ryan joined the civil branch of the Royal Engineers, becoming surveyor in the Limerick district, working as a clerk of works in the Royal Engineers’ office and as an architect, based in Pery Street and later in Glentworth Street.

The architect John Warrington Morris persuaded Ryan to move to London around 1890, and he took on Morris’s practice in Richmond under the name of Morris & Ryan. According to a family tradition, he had some links with the architect John Francis Bentley and spent some time in Italy procuring marble for Bentley's Westminster Cathedral, begun in 1895.

But Ryan had not forgotten his time in Limerick, and in 1906, as Morris & Ryan, he entered and won the competition for the design of the Limerick Technical Institute. His other buildings included Roman Catholic churches, convents and schools, in Kilrush, Kilkee and Ballymahon. He died on 31 May 1921 at his home in Hampstead and was buried in Hampstead Cemetery.