Art for Advent (17): ‘The Holy Family’
by Giovanni Battista Pittoni

My choice of a work of Art for Advent this morning [17 December 2013] is The Holy Family by Giovanni Battista Pittoni, which is the Altar Piece in the Chapel of Sidney Sussex College, Cambridge.

Sidney Sussex College was founded in 1596, and built on the grounds of Greyfairs, the old Franciscan house in Cambridge.

It is probably true that the one surviving building from the old Greyfriars was the refectory and kitchens, and that these were converted into the college chapel. However, the present chapel in Sidney Sussex dates from 1780, when the last buildings of Greyfriars on the site were torn down.

The new chapel was re-designed by James Essex in the 1770s. It appears he had tough taskmasters, as he produced four plans for redesigning the chapel before he was allowed to proceed with his work. In the end, it was an impressive makeover of a plain if evocative 17th century religious space, meeting the classical tastes of the day.

One of the most striking features on entering the chapel is the remarkable Catholic altar-piece, The Holy Family, by the Venetian painter Giovanni Pittoni, which was bought in 1783 for 20 guineas in 1783, 16 years after the death of the artist. This Catholic work of art and its presentation might have been unthinkable in Puritan days at Sidney Sussex, when Oliver Cromwell was an undergraduate.

Giovanni Battista Pittoni, or Giambattista Pittoni (1687-1767) was born in Venice and was a painter of the late-Baroque or Rococo period. He studied painting under his uncle Francesco Pittoni and Antonio Balestra, but we know little about his early career.

He worked briefly in Bologna, but in later years never left his native Venice, although he completed a number of important commissions from German, Polish, Russian, Italian and Austrian patrons. He was known for his “grand-manner” canvases depicting religious, historical, and mythological subjects, and his contemporaries included Giovanni Battista Tiepolo. He died in Venice 1767. 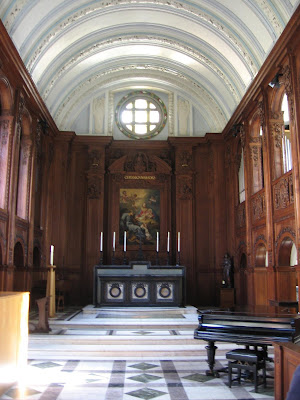 The interior of the chapel in Sidney Sussex College, Cambridge, with The Holy Family, by the Venetian painter Giovanni Pittoni, above the altar (Photograph: Patrick Comerford)

By the early 19th century, Sidney was a very small college in terms of undergraduate admissions. And so it must have been a surprise for many Victorians period that was in effect an Anglican seminary. The “massive” Victorian, Robert Machray, became Canada’s first Anglican archbishop. The controversial Anglo-Catholic, Thomas Pelham Dale (1821-1892), was jailed in 1880 for his ritualism. Later, John Wale Hicks, who became Bishop of Bloemfontein, was typical of his time in publishing books on both doctrine and inorganic chemistry.

Despite this theological history, the reforms at Cambridge from 1850s on, and despite being resisted fiercely by the Master of Sidney, Robert Phelps, changed Sidney’s intellectual course forever. From the largely theological and mathematical college it had been for its the first two centuries or so, it became a power-house in the rapidly expanding medical, natural, physical and chemical sciences, due principally to the inspiration of Clough Williams Ellis.

The laboratories that once stood along the Sidney Street wall beyond A Staircase, now a bicycle shed, were among the first in Cambridge. There, a string of important experiments were carried out by the metallurgist FH Neville. Neville’s portrait hangs at the top of the stairs leading to the Old Library. Following his conversion in 1904, Neville became the first-ever Roman Catholic fellow at Sidney Sussex ... the Jacobite master, Joshua Bassett, might have been pleased. 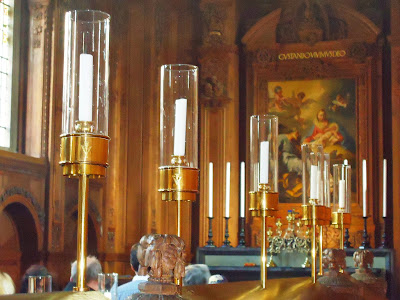 The chapel in Sidney Sussex College was extended and its neo-baroque interior was completed between 1911 and 1923 (Photograph: Patrick Comerford, 2013)

Meanwhile, the chapel, which had been redesigned by James Essex, was proving to be inadequate in size. It only extended to half its present length. However, between 1911 and 1923, TH Lyons completed the present proportions of the chapel, along with its fine neo-baroque interior.

His work suited the High Church complexion that had become part of the life of Sidney by then. Lyons altered and lengthened the chapel, and gave it elaborate oak-panelled walls, a variegated marble floor and Sidney’s distinctive bell turret. The side chapel has the reserved sacrament.

In transforming the sanctuary of Cromwell’s college into an Anglo-Catholic chapel, the Edwardian high churchmen inscribed above Pittoni’s Catholic Venetian altar-piece, The Holy Family, in large, capital, gilt letters the Latin phrase: “Gvstando Vivimvs Deo.” Those words, “gustando vivimus deo,” “by tasting we live in God,” are taken from the seventh century Latin hymn for Easter Vespers, The Lamb’s high banquet we await.

Some more recent additions to the chapel include the panels of stained glass fragments that have been inserted into the antechapel window. These fragments were unearthed during the archaeological investigations about half a century ago in 1958 and they appear to come from the mediaeval windows of the former Franciscan church.

Until about the 17th century, Saint Joseph is often depicted in art as a man of advanced years, with grey hair, usually bearded and balding, and occasionally frail. He is presented as a comparatively marginal figure alongside the Virgin Mary and Jesus Christ, as in this altarpiece by Giovanni Battista Pittoni in the Chapel of Sidney Sussex College.