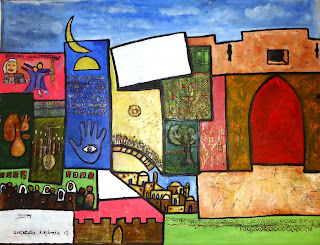 Three of us went to dinner this evening in Damascus Gate in Upper Camden Street, close to the Harcourt Street Luas station, and to Kelly’s Corner, Portobello and the Dublin quarter once known as Little Jerusalem.

The houses in same block in Camden Street include one remembering an early synagogue and a tailors’ trade union founded by Jewish immigrants. Since then Dublin’s Jewish population has moved out from “Little Jerusalem” to suburbs like Terenure and Rathfarnham, and there are more Middle Eastern shops and cafés in the areanear the Grand Canal and the South Circular Road. 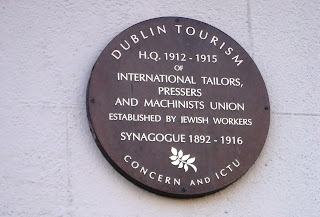 An early synagogue and Jewish workers and trade unionists commemorated on a wall plaque in Camden Street (Photograph: Patrick Comerford, 2013)

Damascus Gate has been open for only three months, so this restaurant is one of Dublin’s latest arrivals. It specialises in Syrian and Lebanese food and is run by the same people that run Little Jerusalem, the Palestinian restaurant in Rathmines. 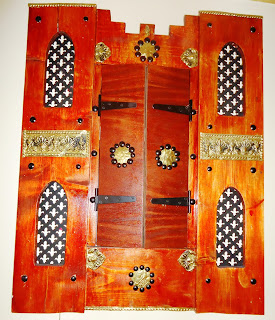 However, this new restaurant takes its name not from the Syrian capital but from the Damascus Gate, the main entrance to the Old City of Jerusalem. The Damascus Gate is located in the wall on the north-west side of Jerusalem, where the road leads out to Nablus, and from there to Damascus.

In modern Hebrew, the gate is known as Sha’ar Shkhem or Shechem Gate, and sometimes as the Nablus Gate. Its Arabic names are Bab al-Nasr, meaning “Gate of Victory,” and Bab al-Amud, “Gate of the Column.”

The paintings and decorations on the wall in Damascus Gate tell the story of the city gate and the story itself, all adding to the atmosphere in a restaurant where we were warmly welcomed and served excellent food.

Posted by Patrick Comerford at 22:00 2 comments: