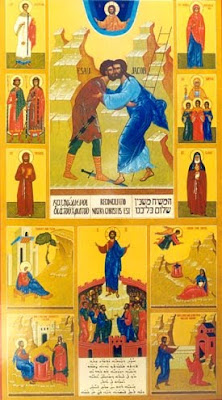 The icon, ‘Christ is our Reconciliation,’ was written for Pax Christi at the Monastery of Saint John in the Desert, near Jerusalem

The Interfaith Conference in Dublin this week was an enthralling introduction to the topic from Clare Amos who worked her way through the story of Esau and Jacob in the Book Genesis, using the Icon of Peace that has been at the heart of a lot of recent work by Pax Christi.

The icon was written for Pax Christ in the Monastery of Saint John in the Desert, a Greek Catholic monastery south of Jerusalem. The central image shows Esau and Jacob meeting and embracing each other (Genesis 33). They are trampling on Esau’s unsheathed sword beneath their feet; behind them is the Ladder Jacob had seen in his vision (Genesis 28).

When they meet and greet each other, Jacob says to Esau: “If I find favour with you, then accept my present from my hand; for truly to see your face is like seeing the face of God – since you have received me with such favour.”

Clare told us that our task is to see the face of God in our brothers and sisters. We are all icons of God, and how serious it is when we cannot see God in each other.

In some traditional rabbinical readings of this story, the angel who wrestles with Jacob at Penuel is the guardian angel of Esau. But in the struggle is the blessing (see Genesis 32-33).

The task of those who call themselves Israel – both Jews and Christians – who hold on to, who wrestle with God, is to engage positively with the others, the Esaus, she said. If we let go of either, we are lesser than Israel.

One of the lower panels of the icon tells of the story of the meeting at the well between Jesus and the Samaritan woman(John 4), which is also the first time Jesus says “I AM,” using the divine ascription to describe himself: ‘I am he, the one who is speaking to you’ (John 4: 26). In his first disclosure using an ‘I AM’ saying, Jesus addresses a woman, a Samaritan, an outsider.

Of course, we had opportunities over the two days to embrace the other as we visited both the mosque at the Islamic Cultural Centre of Ireland in Clonskeagh and the Synagogue on Rathfarnham Road in Terenure.

At the mosque on Wednesday, we were welcomed by Imam, Sheikh Hussein Halawa, and the resident theologian, Mr Ali Selim. The questions and the answers were open and searching and honest, and the welcome was warm, despite the fact that we arrived in the middle of the day when everyone was observing the Ramadan fast.

There was an equally warm and generous welcome from Rabbi Zalman Lent when we visited the Terenure synagogue of the Dublin Hebrew Congregation on Thursday morning. Rabbi Lent, who has been in Ireland for ten years was entertaining and humorous as he opened the ark, showed us the Torah scrolls and a variety of Jewish religious artifacts, and spoke of life as Jew in Ireland today. 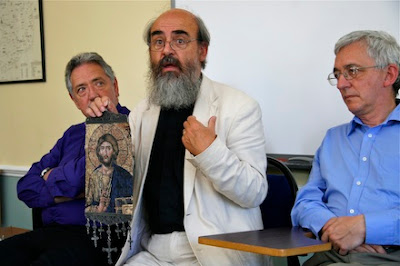 The speakers at the two-day conference in the Church of Ireland Theological Institute included: Clare Amos, Co-ordinator of the Anglican Communion’s Network for Inter Faith Concerns; the Ven Michael Ipgrave, Archdeacon of Southwark and a leading expert in the Church of England on interfaith issues; Canon Joanna Udal, who is the Archbishop of Canterbury’s Secretary for Anglican Communion Affairs; the Revd Dr Brendan Leahy, Professor of Systematic Theology at Saint Patrick’s College, Maynooth; Bishop Michael Jackson as chair of the Interfaith Working Group; and Bishop Trevor Williams of Limerick and Killaloe, who steered the ‘Hard Gospel’ programme in the Church of Ireland.

The guests of honour at the conference dinner on Wednesday night were the two Archbishops of Dublin, Archbishop John Neill and Archbishop Diarmuid Martin, and Rabbi Zalman Lent, and the guest speaker was the Minister of State, Conor Lenihan TD.

We ended the day with a panel discussion involving , sharing our experiences and our hopes for the future. This may have been the first conference of its type for any church in Ireland, and now we need to move on the next stage of engaging the church at diocesan and parish level in dialogue. 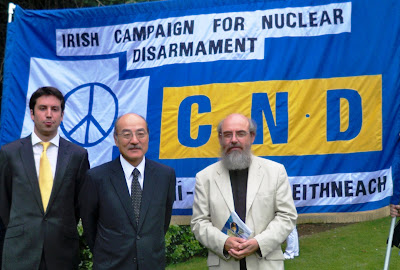 The current [September 2010] edition of the Church Review, the Dublin and Glendalough diocesan magazine, carries this half-page report and photograph on page 14:

The President of the Irish Campaign for Nuclear Disarmament (CND), Canon Patrick Comerford, has criticised the world’s governments for their investment in nuclear arms. Speaking on the 65th anniversary of the atomic bombing of Hiroshima, he said: “Sixty-five years later, we are still building more and more terrifying weapons of mass destruction.”

Canon Comerford was speaking at Irish CND’s annual Hiroshima commemoration in Merrion Square, Dublin. “Britain is one of the smallest nuclear powers in the world today – but its Trident force alone has the capacity to destroy Hiroshima 7,296 times over,” he said. “It has become difficult, if not impossible, to distinguish between war and mass murder because any respect for the rights of civilians has been discarded, and the accepted principles of the just war theory have been ignored.”

“If we ignore the just war principles, enshrined in international law, we run the real danger that the conflicts of the 21st century turn into perpetual war,” he said. “Accepting the morality of nuclear weapons numbs us in a way that makes it increasingly difficult to ask these questions. And it makes it increasingly likely … that our present conflicts are turning into perpetual war.”

“A fact of humanity is that we’re determined to learn through making mistakes. The great tragedy behind that fact is that some people do not learn at all,” Mr Murphy said. “In remembering this, we remind ourselves that this actually happened, and it is not just some story.”

The Japanese Ambassador to Ireland, Mr Toshinao Urabe, also spoke at the commemoration. He expressed his gratitude to Irish CND for organising the event, and praised Ireland’s perseverance in laying the foundations for the Nuclear Non-Proliferation Treaty.

The commemoration takes place each year at a memorial cherry tree, which was planted 30 years ago in the park in Merrion Square Park on 6 August 1980.
Posted by Patrick Comerford at 06:00 No comments: