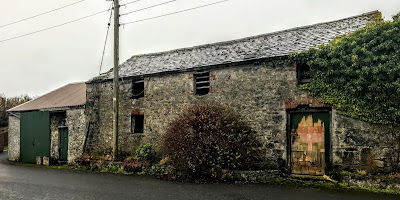 A glimpse of Askeaton’s industrial past at Abbey View (Photograph: Patrick Comerford, 2018)

The architecture of Askeaton is a mixture of the mediaeval and the modern, from the Tower of the Knights Templar in the churchyard at Saint Mary’s, the castle and banqueting hall built by the Desmond FitzGeralds, and the late mediaeval friary of the Franciscans on the banks of the River Deel, to the Georgian and Victorian shopfronts on the two squares, Main Street and Church Street, to modern housing estates like Deel Manor, modern factories and the Leisure Centre with its state-of-art facilities.

But in my walks around Askeaton, I only have to turn a corner and find myself walking along a country lane, by the banks of the river, by old quay-front grain stories, abandoned mills and creameries, or finding sites of architectural and archaeological interest that tell the story of this once prosperous town that once bustled with trade and traffic on the Shannon Estuary.

Twice this week, I walked along Abbey View, on the raised escarpment above the Leisure Centre and the west bank of the River Deel, and I found myself wondering about the lost legacy of an industrial past.

An abandoned detached three-bay, three-storey, building on the east side of Abbey View is almost 200 years old. It was built around 1820 and has a two-bay single-storey extension on the north side.

The main part of the building has a pitched slate roof with a brick eaves course, and the extension has a hipped corrugated-iron roof to extension.

This building is interesting for its brick dressings and early slate roof. The outbuilding presents a strong façade to the streetscape and makes a positive contribution to the architectural heritage of Askeaton.

But the building is no longer in use. It is crumbling, the roof is collapsing, the windows are open to the elements, and the doors are bolted and locked. 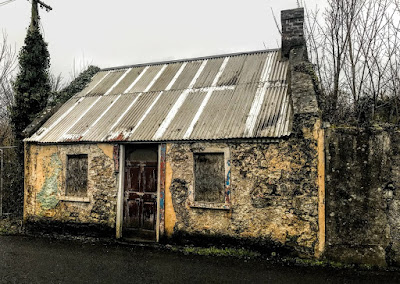 Beside it, a row of four or five single-storey cottages show signs of their colourful past in the peeling paintwork. The roofs are collapsing, the doors are locked, and it must be a long time since any families lived in them.

But here or there, where the wooden battening had fallen away, I could catch a glimpse of broken glass panes in a window, and a torn lace curtain fluttering in the breeze that was invading the house.

Perhaps, in the past, someone stood at this window, looking at workers making their way to the now-abandoned factory, or waiting for a father, a brother, a son, to return home at the end of the working day.

But the windows are shut up, the doors are locked, the keys have been thrown away, the families have moved away, and there is nobody in Abbey View to tell the stories of an industrial past or to share those memories. 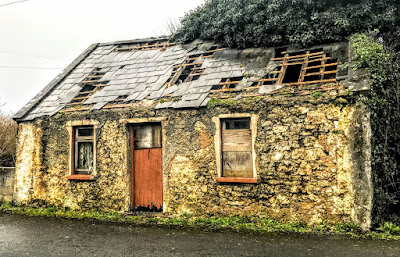 The curtains are fluttering in the breeze, but no one is standing at the window (Photograph: Patrick Comerford, 2018) 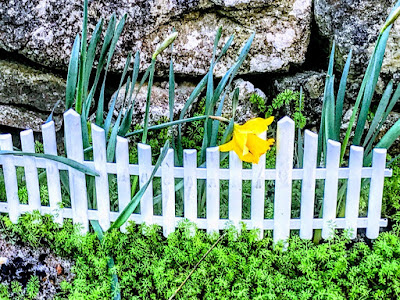 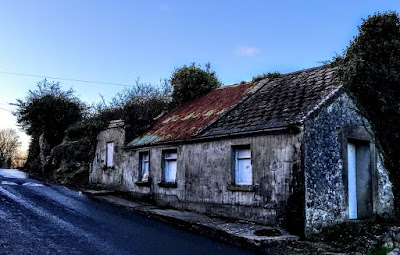