‘Don’t mow, let it grow’ for
the bees and the butterflies 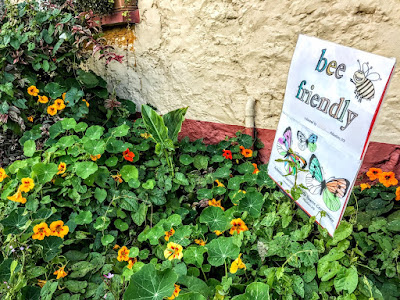 While I was visiting the Hunt Museum last week and the exhibition of paintings by Jack B Yeats and Paul Henry, I noticed a small grassy area that is set aside and known as ‘The Bee Loud Glade.’

This is a wild garden and the name and sign are the inspiration of Sarah Hughes and the junior infants class at Our Lady Queen of Peace National School in Limerick.

Nearby, in a shaded corner on one of the wings of the museum, is a sign that declares: ‘Warning. Live Honey Bees.’ Behind a screen is an apiary that is part of the Limerick Urban Beekeeping Society project. Visitors are warned of the possibility of being stung and the sign advising people who know they have allergic reactions to bee stings not to enter the area.

For a time, I stood in awe as I watched the bees busy at work behind the screen.

‘The Bee Loud Glade’ at the Hunt Museum in Limerick (Photograph: Patrick Comerford, 2017)

Back in Askeaton, since the weekend, I have noticed how there are many areas of open grass that are not mowed or that allowed to grow for weeks on end as part of a scheme to manage them for wildlife.

Some of the signs declare: ‘Don’t mow, let it grow.’ They say: ‘This area of grass will be cut on a 6-weekly rotation to allow clover, bird’s-foot-trefoil and other low-growing plans to blossom. This will provide food for bees and butterflies where closely mown grass does not.’

There are signs on the east end of Church Street, east of the Rectory, near the West Square, and by the swimming pool, close to the banks of the River Deel. 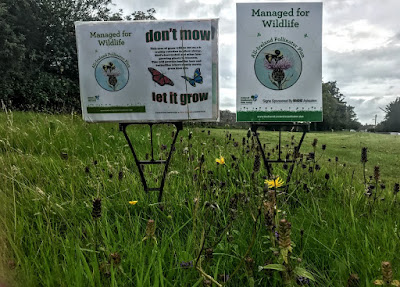 ‘Don’t mow, let it grow’ … a patch for the bees and the butterflies near the Rectory in Askeaton (Photograph: Patrick Comerford, 2017)

Some of the signs are sponsored by local businesses, others have been designed by schoolchildren and in schools.

During a late evening walk in Askeaton yesterday, I wondered whether I am living in the most bee-friendly town and county in Ireland. 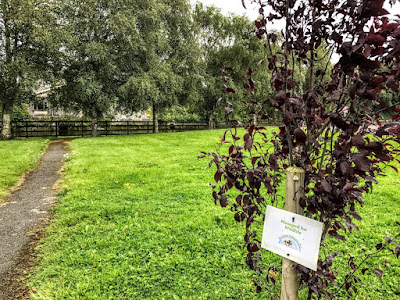 ‘Managed for Wildlife’ … close to the River Deel in Askeaton (Photograph: Patrick Comerford, 2017) 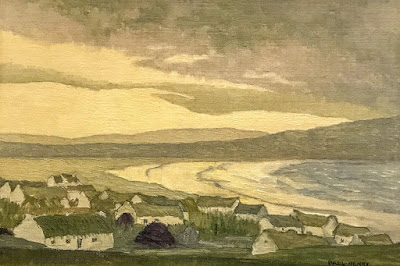 I have not been back to Achill Island yet this year. But I was transported back to Achill through the paintings of Paul Henry during the weekend when I visited the summer exhibition at the Hunt Museum in Limerick of paintings by Jack B Yeats and Paul Henry, two of Ireland’s most important 20th century artists.

The exhibition, ‘Jack B Yeats and Paul Henry: Contrasting Visions of Ireland,’ features 50 works, bringing together paintings drawn from private and public collections.

Many of these works are normally not available for public viewing. They include works on loan from the European Investment Bank Collection in Luxembourg and other paintings have been borrowed from private collections.

The former Abbot of Glenstal Abbey, Father Mark Patrick Hederman, launched the exhibition earlier this summer. Speaking in the Hunt Museum, he said this unique exhibition encourages ‘visitors to see Ireland through the eyes of two very different artists working before, during and after the establishment of the Irish Free State.’

The two artists were contemporaries and had much in common. Both were born in the 1870s, and they died within two years of each other in the 1950s after long and prolific careers. Both had family links with the west of Ireland, both began their working lives in London, both married fellow artists, and both returned to Ireland in 1910.

Ten years later, they collaborated in setting up the Society of Dublin Painters in 1920. Each separately discovered and recreated the West of Ireland in ways that captivated the imagination of critics and the Irish public.

Their paintings provided the new Irish Free State with a distinctive and positive image of its people and its land, offering insights into the ‘soul’ of Ireland through its traditions, its landscapes and streetscapes and the ways of life of the Irish people.

Yet, their paintings differ profoundly in style and scope, and demonstrate the diverse ways in which the creative mind responds to its environment, transforming sensations, memories and experiences in their different visions. 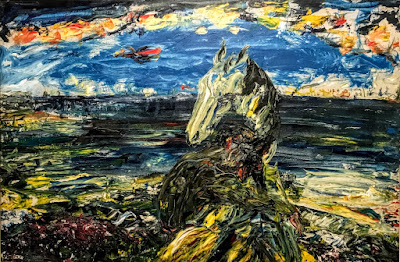 ‘From Portacloy to Rathlin O’Beirne’ (1932) by Jack B Yeats, oil on canvas, in a private collection (Photograph: Patrick Comerford, 2017)

John (Jack) Butler Yeats (1871-1957) was a brother of the poet William Butler Yeats and was immensely prolific and innovative in his style and technique. He was born in London and his early style was that of an illustrator – he created the first cartoon strip for Sherlock Holmes and the works of Arthur Conan Doyle. He began to work regularly in oils in 1906, and he moved to Ireland permanently in 1910.

His early pictures are simple lyrical depictions of landscapes and figures, mainly from the west of Ireland, especially in his boyhood home in Co Sligo.

He responded to the distinctive nature of the West of Ireland, especially in his beloved Sligo and in Irish mythology, and to the practices and traditions of its people. He also celebrates the city life of the new Ireland, the Irish love of sport, and social events at the heart of rural Ireland.

Yeats also holds the distinction of winning the Irish Free State’s first medal at the Olympic Games. At the 1924 Summer Olympics in Paris, his painting The Liffey Swim won a silver medal in the arts and culture segment.

Paul Henry (1876-1958) was born in Belfast, and lived and worked on Achill Island for a decade, from 1910 to 1919. His works are incredibly atmospheric and evocative, and he continued to produce Achill landscapes in later life. He portrays traditional habits and ways of life, as well as the unmistakable landscape features of the West of Ireland. An immensely popular artist, his work has influenced many peoples’ perceptions of the uniqueness of Ireland.

● The exhibition opened on 2 June and continues until the end of next month [Saturday 30 September 2017]. 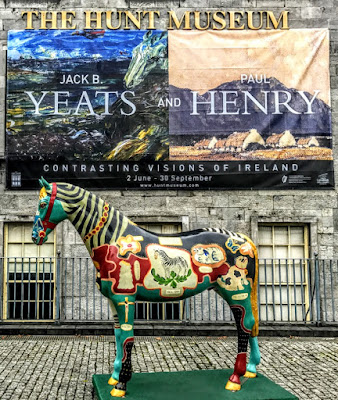 The Jack B Yeats and Paul Henry exhibition continues at the Hunt Museum until 30 September (Photograph: Patrick Comerford, 2017)