‘Love All’ and ‘Paparazzi’ in the
heart of suburban south Dublin

Paparazzi ... a theme behind the name of the restaurant in Templeogue (Photograph: Patrick Comerford, 2014)

Templeogue must be the archetypal south Dublin suburb, with its tennis club, sports facilities, cafés, fee-paying schools – and all 15 bus routes go through some part of Templeogue on their way to Terenure, Rathgar and Rathmines and on into the city centre.

But how big is Templeogue and how far does it extend? Like Terenure, it must have very porous boundaries, extending to parts of Ballyroan, Butterfield, Firhouse, Greenhills, Kimmage, Knocklyon, Limekiln, Old Orchard, Perrystown, Rathfarnham, Tallaght, Terenure, Tymon, and Whitehall.

In a moment of unguarded snobbery, a former colleague, point out that he lived in “Templeogue before the bridge” and not in more naff “Templeogue across the bridge.”

He was not happy to hear that the original Templeogue was much nearer Tallaght than the present Templeogue village.

James Joyce mentions Templeogue in Finnegans Wake, the poet Austin Clarke lived in Bridge House beside Templeogue Bridge on the banks of the River Dodder, and Archbishop George Simms retired to live in Templeogue with his wife Mercy in 1991.

The Irish name, Teach Mealóg, means the “New Church of Saint Mel” or the house or Church of young Saint Mel, said to have been built ca 1273. By 1615, the church was in ruins, and the ruins can be seen in the graveyard at the top of Wellington Lane near the Spawell Leisure Centre. Nearby, Saint Michael’s House occupies the former Templeogue House, which incorporates parts of Templeogue Castle, built by the Talbot family.

Although Templeogue is only 6 km from the city centre, we had sweeping views across to the Dublin Mountains this afternoon during lunch at a window table in Paparazzi in Old River House, in the heart of Templeogue. We had a LivingSocial voucher for lunch, and had Tagliatelle Vegetarian, Seafood Risotto, two glasses of white wine, and two double espressos.

In the background, popular Italian folk songs from decades ago were unobtrusive. The walls were decorated with paparazzi photographs of Marilyn Monroe, and the mirrors gave the first floor restaurant a greater feeling of expansive space. 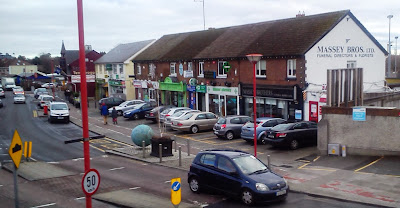 Looking out at Templeogue Village from a window in Paparazzi in Templeogue (Photograph: Patrick Comerford, 2014)

Immediately below us was Templeogue Tennis Club, and to the left the rows of shops that give Templeogue its village character, from Templeogue Barbers and Massey’s Funeral Home, passing the Templeogue Inn, known more popularly as ‘The Morgue,’ and on to Hollingsworth’s bicycle shop.

The Templeogue Inn is the one and only pub within the boundaries of the village. It is also known as The Morgue. When the old tram route passed through Templeogue, it is said, because the tram ran so close to the pub, there were many deaths and the corpses were often brought back into the pub and laid out on the tables.

Some years ago, when a betting shop opened a few doors down, between Massey Brothers and the tennis club, many residents took offence when it was given the name “Dead Cert.”

Now in front of Massey’s, the barbers and the tennis club, the most noticeable landmark is Love All, a large bronze spherical sculpture about a metre in diameter. The bronze is patinated green and dramatically resembles a tennis ball from afar.

At a closer look, however, is looks more like a scaled-down world with tiny details of houses, roads, cars and people emerging from the textured green surface, and seam of the tennis ball turns out to represent the River Dodder.

Rachel Joynt was inspired by both the tennis club and the River Dodder as she worked on Love All. She also suggests the notion of a globe or the world by mounting the sculpture on an axle so that it rotates slowly if pushed.

“For me, a successful public artwork needs to have a sense of place, a freshness, some intrigue and playfulness, a bit like a frozen moment from a daydream,” she has said. 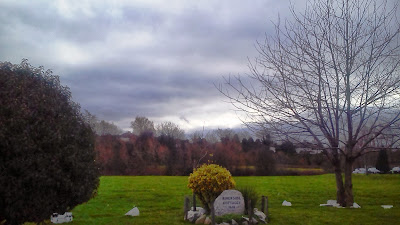 Behind the village, the tennis club and Hollingsworths, we walked down the hidden laneway that drops down to an old semi-circle of houses at Riverside Cottages, built on the banks of the River Dodder over 100 years ago. Here there is a semi-rural setting in the heart of suburban south Dublin, and from here it is possible to walk along the river bank through Rathfarnham and much of south Dublin.

Later this evening, while I was in Harold’s Cross, I caught a glimpse to the east of the still full moon rising in a clear sky above the green copper dome of the church in Rathmines. It was a very different “bronze age” view than Rachel Joynt’s Love All in Templeogue.

Suburban south Dublin was looking beautiful in mid-January, and I gave thanks for all those I love and all those who love me.