Poems for Lent (4): ‘Lenten Thoughts of a High Anglican,’ by John Betjeman 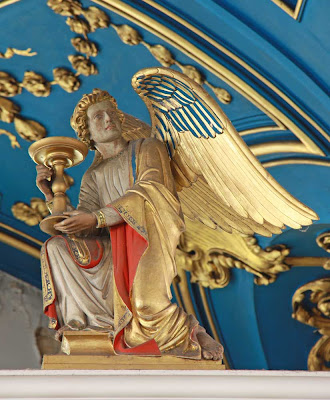 ‘The angel choir must pause in song / When she kneels at the altar rail’ … an angel figure in the Grosvenor Chapel, in South Audley Street in the heart of Mayfair in London

The Poem for Lent I have chosen this morning is ‘Lenten Thoughts of a High Anglican,’ by Sir John Betjeman (1906-1984), who was Poet Laureate and one of the great makers of the Christian imagination in the last century.

Betjeman spent much of World War II as a diplomat attached to the British Embassy in Dublin. In his poems, Betjeman describes the perils of faith and the struggle to believe. He was a troublesome poet who persisted in believing, and in his poetry he explored his thoughts about his Anglican faith, about Englishness and about Christianity in general.

He was a popular poet, yet he remains one of the most significant literary figures of our time to declare his Christian faith. In a letter written on Christmas Day 1947, he said: “Also my view of the world is that man is born to fulfil the purposes of his Creator i.e. to Praise his Creator, to stand in awe of Him and to dread Him. In this way I differ from most modern poets, who are agnostics and have an idea that Man is the centre of the Universe or is a helpless bubble blown about by uncontrolled forces.”

Two of his poems, ‘In Westminster Abbey’ (1940) and ‘Sunday Morning, King’s Cambridge’ (1954), are set in two of the most important centres of worship in England, one with political significance, the other with academic significance.

‘In Westminster Abbey’ is one of Betjeman’s most savage satires. The poem is a dramatic monologue, set during the early days of World War II, in which a woman enters Westminster Abbey to pray for a moment before hurrying off to “a luncheon date.”

She is not merely a chauvinist but also a racist, a snob and a hypocrite who is concerned more with how the war will affect her share portfolio than anything else. Her chauvinistic nationalism leads her speaker to pray to God “to bomb the Germans” … but “Don’t let anyone bomb me.” But her social and ethical lapses are a product of her spiritual state, which is a direct result of a nation’s spiritual sickness.

In ‘Sunday Morning, King’s Cambridge,’ the moment of worship exists out of time as the living and the dead, the choir and the poet, join in the eternal praise of God. Betjeman captures a joyful and spontaneous reaction, albeit an emotionally restrained expression, and a sense of wonder in the celebration of Anglican worship.

Taken together, those two poems, ‘In Westminster Abbey’ and ‘Sunday Morning, King’s Cambridge,’ represent the work of a poet who believes deeply in Christ and who still holds out hope for the Church of England and Anglicanism.

This morning’s poem, ‘Lenten Thoughts of a High Anglican,’ is one of Betjeman’s four poems – alongside ‘Churchyards,’ ‘Advent 1955,’ and ‘Christmas’ – in which he makes the mystery of the Christian faith is a central issue.

Kevin J. Gardner, in Faith and Doubt of John Betjeman: An Anthology of Betjeman’s Religious Verse (Continuum, 2006), says that in these four poems Betjeman finds the sudden and wondrous appearance of God in the most unlikely of places, giving him “a sense of spiritual security and renders him susceptible to the embrace of mystery and miracle.”

‘Lenten Thoughts of a High Anglican’ – which in Betjeman’s drafts is titled ‘Lenten Thoughts in Grosvenor Chapel’ – was the first spontaneous poem he wrote after his appointment as Poet Laureate in October 1972. It was first published in the Sunday Express on 13 May 1973, and was included in the collection A Nip in the Air (1974).

Alongside the joviality found in many of his poems, this poem has an unusual tonal complexity. Betjeman describes a mysterious and sexually alluring woman who receives Holy Communion each Sunday. In an attempt to refocus the devotional attention of the parishioners, the priest tells them not to stare around or to be distracted during his celebration of the Eucharist.

But Betjeman’s experience contradicts the admonitions from the priest. In a peculiar way, through this mysterious and alluring woman, he suddenly becomes aware of the presence of God. The intrigue and arousal surrounding the women he describes as the “mistress” speaks to the poet of the mystery of God.

Betjeman told Tom Driberg that “this [poem] is about a lady I see but have never spoken to, in a London church.’ The church was the Grosvenor Chapel in South Audley Street in the heart of Mayfair in London.

From 1972 until his death in 1984, Betjeman worshipped at the Grosvenor Chapel, which had been redesigned and transformed, with an Anglo-Catholic emphasis, in 1912 by Sir Ninian Comper in 1912. It was a favourite church of Bishop Charles Gore, and for many years the congregation included such people as the writer Rose Macaulay.

In an interview with the Sunday Express, Betjeman said: “I saw this woman in church one Sunday. I didn’t know who she was. She was the most beautiful creature; and she had a slightly sad expression. And I didn’t even know her name – but it was probably all the better for that. She might have been terrible.”

“I like there to be a mystery between me and my beloved,” he continued. “And I don’t think there was anything wrong with looking at her in church, do you? I don’t think there’s anything wrong with loving the beauty of the human figure whether it’s in church or in the street … I’m not sure if [the poem] is any good but I hope it will please people. I’ve always wanted my verse to be popular because I wanted to communicate.”

A week later, on 20 May 1973, the Sunday Express published a parody reply, ‘With apologies to a charming poet,’ written by Frank Hayward, in the name of the husband of the woman in question.

Betjeman’s Dublin-born daughter, the author and journalist Candida Lycett Green, has identified the woman who inspired this poem as Joan Price, who used to go to church at Betjeman’s church, the Grosvenor Chapel. She was the Beauty Editor of Harpers & Queen – now Harper’s Bazaar – and was married to Michael Constantinidis, a sidesmen at the Grosvenor Chapel.

The poem was also parodied in Private Eye with these lines:

Lovely lady in the pew,
Goodness, what a scorcher – phew!
What I wouldn’t give to do
Unmentionable things to you.

Lenten Thoughts of a High Anglican by John Betjeman

Isn’t she lovely, “the Mistress”?
With her wide-apart grey-green eyes,
The droop of her lips and, when she smiles,
Her glance of amused surprise?

How nonchalantly she wears her clothes,
How expensive they are as well!
And the sound of her voice is as soft and deep
As the Christ Church tenor bell.

But why do I call her “the Mistress”
Who know not her way of life?
Because she has more of a cared-for air
Than many a legal wife.

How elegantly she swings along
In the vapoury incense veil;
The angel choir must pause in song
When she kneels at the altar rail.

The parson said that we shouldn’t stare
Around when we come to church,
Or the Unknown God we are seeking
May forever elude our search.

But I hope that the preacher will not think
It unorthodox and odd
If I add that I glimpse in “the Mistress”
A hint of the Unknown God.