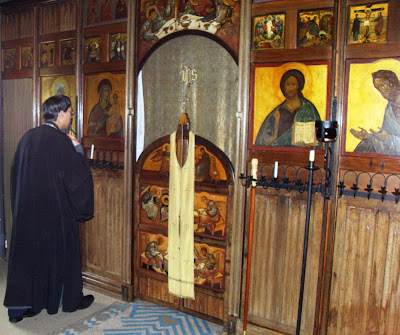 Inside the first chapel in the old rectory at the Patriarchal Stavropegic Monastery of Saint John the Baptist at Tolleshunt Knights (Photograph: Patrick Comerford, 2011)

We had an early start this morning [Thursday, 28 July], leaving Sidney Sussex College at 6 a.m. to catch a bus from Jesus Lane, Cambridge, to visit the Patriarchal Stavropegic Monastery of Saint John the Baptist at Tolleshunt Knights, near Maldon in Essex.

We arrived in time for the Divine Liturgy at 8 a.m., served by a Finnish monk, Father Melchisedec, followed by breakfast with the Hegumen or Abbot of the monastery, Archimandrite Kyrill, who is originally from Australia, and the monastic community. The monastery is a monastic community of both men and women, directly under the Ecumenical Patriarchate, and is the oldest Orthodox religious community in Britain.

The community was founded in an old Anglican rectory in 1958 by Elder Sophrony, under the jurisdiction of Metropolitan Anthony of Sourozh, who was then the ruling Russian bishop in England, with six founding members of the monastic community drawn from different nations. The monastery was brought under the direct jurisdiction of the Ecumenical Patriarchate in 1965.

When he was founding the monastery, Elder Sophrony wanted to be sure his community would not just have outward conformity, but also focus on inner asceticism. The typikon of the monastery consists of the repetition of the Jesus Prayer about four hours a day and the serving of the Divine Liturgy three or four times a week. This found inspiration in Elder Sophrony’s experience as an Athonite monk, and in the example of Athonite skete practices and the lives of Saint Nicodemus and Saint Paisius Velichkovsky.

The community consists of men and women living the monastic tradition of a Christ-centred prayer life. At present, there are over 40 members of the community – the majority are nuns, with a smaller number of monks, and they come from many countries including Australia, Cyprus, Denmark, Egypt, Finland, Germany, Greece, Romania, Russia and Sweden.

After breakfast, Sister Thecla, originally from Romania, brought us on a tour of the monastery, including a visit to the first chapel built here in the former rectory by the founder, Father Sophrony, when he arrived from Paris, and told us of the life of his spiritual father, Saint Silouan the Athonite. 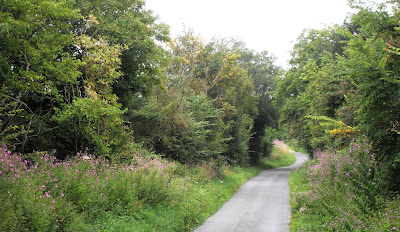 A walk in the Essex countryside before lunch (Photograph: Patrick Comerford, 2011)

There was time before lunch for a walk through some of the beautiful countryside surrounding the monastery, and through the monastery orchards, which look out onto the sea and across to Bradwell. 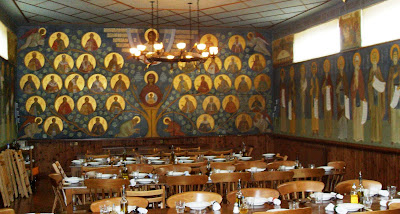 The monastery rectory where we shared lunch with community (Photograph: Patrick Comerford, 2011)

Later this evening, there is a special Summer School dinner in the Old Library of Sidney Sussex College. 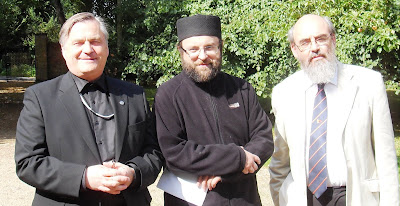 A midsummer night of Shakespeare at Saint John’s College 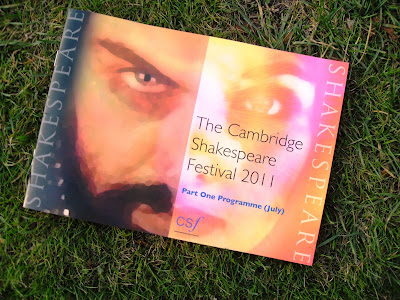 Shakespeare on the lawn ... well it was a midsummer night (Photograph: Patrick Comerford, 2011)

Last night, we moved from Jerusalem to Athens, from Sidney Sussex to Saint John’s, from theology to theatre, from Eastern Orthodoxy to English literature, from discussing secularism to the drama of Shakespeare, from summer school to A Midsummer Night’s Dream.

The participants in the summer school organised by the Institute for Orthodox Christian Studies were invited to a production of William Shakespeare’s A Midsummer Night’s Dream, staged in Saint John’s College Garden as part of the Cambridge Shakespeare Festival.

Cambridge is well-known for the Cambridge Footlights, which was the starting point of the careers of many actors, comedians and media personalities, including John Cleese, Peter Cook, Stephen Fry, Hugh Laurie, Jonathan Miller, Emma Thompson, and many members of both the Monty Python team and the Goodies. The Footlights – or more properly the Cambridge University Footlights Dramatic Club – is now based at the ADC Theatre in Park Street, off Jesus Lane, and a few steps around the corner from Sidney Sussex College. 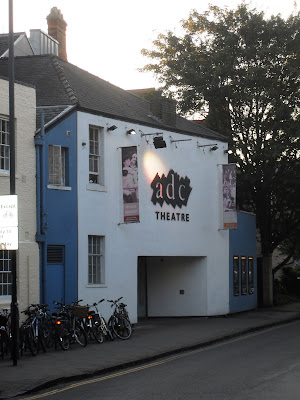 But theatre in Cambridge is also synonymous – especially at this time of the year – with the Cambridge Shakespeare Festival. The festival was founded in 1987, and was recently described in the TLS as “one of the finest events of its kind in the UK.” The festival runs for eight weeks in July and August, with productions attracting up to 25,000 visitors, many returning to Cambridge year after year.

The festival tries to strip away unnecessary theatrical artifice and gimmickry. But the productions are vivid and spectacular, performed in full period costume with live Elizabethan music.

Yet the company seeks to make all the plays accessible, without assuming any prior knowledge on the part of the audience of the author or of the evening’s play. 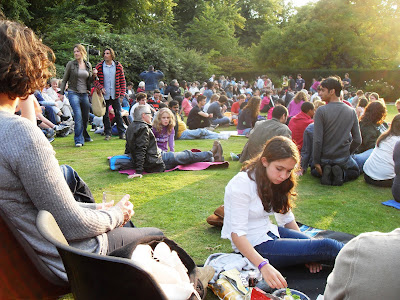 A festival evening is a unique experience, with each performance staged in the open air in the idyllic setting of a Cambridge college garden, with the audience arriving early to picnic before an evening of theatre.

Last night’s performance of A Midsummer Night’s Dream was in the Scholars’ Garden at Saint John's College – just inside the Queen’s Road entrance. The play, one of Shakespeare’s most popular and widely performed the world over, is a humour-packed fairy-tale set in a world of love, jealousy and youthful exuberance.

Dramatis personæ ... a theatrical touch to the façade of Cintra House on Hills Road, Cambridge. Originally built as a terrace of houses by John Edlin in 1860-1865, the romantic façade was added later. Cheshunt College, which moved here in 1905, is now part of Westminster College and Cintra House is now owned by the Open University (Photograph: Patrick Comerford, 2011)

A Midsummer Night’s Dream, probably written between 1590 and 1596, tells of the events surrounding the marriage of Theseus, Duke of Athens, and Hippolyta, Queen of the Amazons. These include the adventures of four young from Athens lovers – Demetrius and Helena, Lysander and Hermia – and a group of amateur actors – Quince, Snout, Flute, Starvevling, Snug and Botom – who are manipulated by fairies – Oberon, Titania and Puck – who live in the forest in which much of the play is set.

And how the scenic gardens of Saint John’s provided an apt setting for that woodland scenes last night!

Saint John’s College was founded in 1511 by Lady Margaret Beaufort, mother of King Henry VII. It is the second largest college in Cambridge, it has about 135 Fellows, 530 undergraduates and 300 graduate students. The total current membership of the College, comprising in essence all those who have studied here, stands at around 12,000. 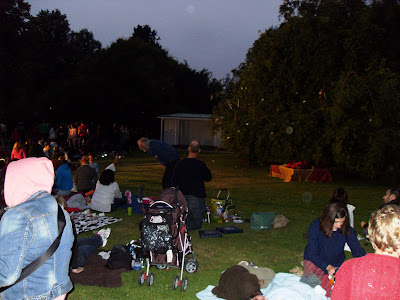 David Salter’s production was lively and enjoyable, enthralling us with music and slap-stick humour and inviting audience participation. The cast was hard-working, with most actors playing multiple parts, thanks to quick changes of hats, of accents – and of accents.

Annie Gregson played both Starveling holding ‘the moon’ and a lovesick Helena following Demetrius around. Gareth Saunders played both Demetrius, the object of Helena’s affections, and the equally unhappy ‘wall’ caught between Pyramus and Thisbe in the ‘play within the play,’ visibly uncomfortable as the lovers whispered to one another across him and moved to kiss each other. There was a cleverly choreographed cat fight between the central ladies, with Hermia (Catherine Forrester, who had replaced Daphne Alexander) finding herself trapped in a wicker basket beneath the trees and shaking with rage.

As the sun set, the floodlights picked out the feathers strung through the trees, pigeons could be heard in the trees nearby, a lone swift circled above, moths glowed in Starveling’s would-be moonbeam, and a glorious summer evening passed to dusk and then to night.

When all was over, we walked back from Saint John’s gardens, along Queen’s Road, by Westminster College, on down Magdalene Street, over Magdalene Bridge to the Mitre in Bridge Street, to discuss the play, the play within the play, and to end a perfect midsummer night. 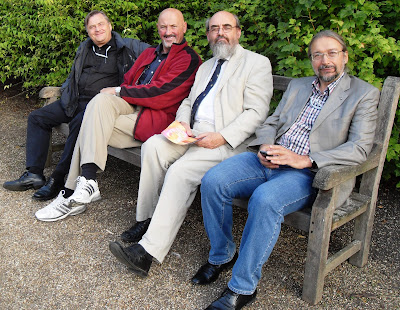 From Monday [1 August], the plays are: Much Ado About Nothing (King’s College), Macbeth (Trinity College), All’s Well That Ends Well (Robinson College), and Romeo and Juliet (Girton College). The festival ends on 27 August.

Canon Patrick Comerford is Director of Spiritual Formation, the Church of Ireland Theological Institute, Dublin, and a canon of Christ Church Cathedral, Dublin.