A rich young man and the Cost of Discipleship

The Nineteenth Sunday After Trinity

The Church of Ireland Theological Institute

May all I think, say and do be to the praise, honour and glory of God, + Father, Son and Holy Spirit, Amen.

Charles Gore (1853-1932) was one of the great, almost formidable theologians at the end of the 19th and the beginning of the 20th century. He was the editor of Lux Mundi (1881), an influential collection of essays; the founder of the Community of the Resurrection (1892); and the first Bishop of Birmingham (1905). He was also from a well-known Irish family; his brother was born in Dublin Castle and his father was born in the Vice-Regal Lodge, now Arás and Uachtarain.

But formidable theologians are also allowed to play pranks on the unsuspecting. And it is told that Charles Gore loved to play a particular prank on friends and acquaintances when he was a canon of Westminster Abbey.

He would enjoy showing visitors the tomb of one of his collateral ancestors, the 3rd Earl of Kerry, with an inscription that ends with the words, highlighted in black letters and in double quotation marks: “hang all the law and the prophets.”

On closer inspection, he would point out, the words are preceded by “... ever studious to fulfil those two great commandments on which he had been taught by his divine Master ...” “…hang all the law and the prophets.”

Francis Thomas Fitzmaurice (1740-1818) was a rich young man, for he was a child of only seven when his father died and he inherited not only the family title as the 3rd Earl of Kerry but also vast estates, including 20,000 acres in Lixnaw, Co Kerry, which he sold off when he was still in his 40s. A widowed and sad man, he spent the rest of his days in London. When he died in 1818, he was buried in Saint Andrew’s Chapel in Westminster Abbey, and his family’s connections with Lixnaw, dating back to the 13th century, came to an end.

He had no sons, and the titles and any remaining lands were inherited by a cousin, the son of the Dublin-born British Prime Minister who gives his name to places like Lansdowne Road and Shelburne Road. 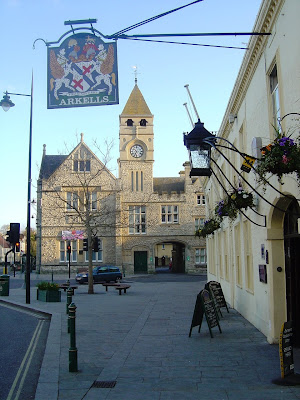 The rich young man who comes to Jesus at the beginning of this morning’s Gospel story may lack nothing, has perhaps inherited a vast amount in his youth, but now wants to inherit eternal life.

He wants eternal life, he says, but he fails to realise he has met the living God face-to-face, and he turns away.

However, when this young lawyer tests Jesus this morning, we get a very different set of references to the commandments. And when the real challenge is put to him, he may as well have answered: “Hang all the law and the prophets.”

Jesus has set out on the journey, on the way to Jerusalem, and Saint Mark’s Gospel is a challenge to follow him on that way, the way to the Cross, the way of discipleship.

As the journey begins, this rich young man runs up to Jesus and bows down before him – kneels before him, almost like an act of adoration – and asks what he must do. But the rich young man is not willing to follow Christ on that way.

This is a sad story of a “failed vocation,” the only example we have of a potential disciple who comes on his own initiative and not at the call of Christ.

Did you seek your vocation or were you called? Truth to tell, it was probably a mixture of both for you.

But if you rush to Jesus, knell down before him and ask what you should do, do not be shocked or dismayed by the demands he can make on you.

This man would follow Jesus. This man would knell down before Jesus. This man, when he hears a select listing of commandments from Jesus, thinks he is doing it all. Perhaps, like James and John in next Sunday’s Gospel reading (Mark 10: 35-45), he even thinks at the back of his mind: “I’m such a good catch, Jesus should be happy to have me as one of his disciples. After all look at how generous I am: I don’t murder, I don’t commit adultery, I don’t steal, I don’t bear false witness, I don’t defraud, I honour my parents” (verse 19-20).

But it is an interesting selection from the Ten Commandments. Did you notice, as the Gospel was being read, which ones are missing?

This morning’s list is the list traditionally placed on the second tablet, the six about our relationships with one another, the ones that depend on loving our neighbour.

But what about the ones on the first tablet, the four that concern loving God? The ones about the Sabbath Day, the Lord’s name, idols, and recognising God and no other gods?

He kneels before the Lord, but cannot work out his relationship with God. Christ is a “Good Teacher” for him (verse 17), but is just not good enough for him. No matter how he turns, where he turns, he does not realise he has come face-to-face with the living God, and he does not love him enough to follow him.

This is a story about priorities, and the young man who comes to Christ this morning has chosen the priory of wealth, position and privilege, is not willing to pay the Cost of Discipleship.

The young man’s claim is not proud. He shows an almost disarming keenness and even an endearing naivety (verse 20). He is shocked by the Cost of Discipleship and he turns away, shocked; he turns away from Christ. There is a choice to be made, and he chooses to turn away, and turning away is the very opposite to conversion (verse 22).

He finds, as it says in our epistle reading, that God’s word is like a two-edged sword, cutting through to the heart of the matter, laying bare the real intentions of our hearts (Hebrews 4: 12-13; see Revelation 1: 16). And in his choice to turn away he misses an opportunity of realising what it is to come face-to-face with the living God.

We get it wrong when we judge our successes against the images others project on us rather than seeking to be shaped in the potential we have because we are made in the image and likeness of God.

Where do you turn to find the Living God? The opening chapter of the Letter to the Hebrews says Christ “is the reflection of God’s glory and the exact imprint of God’s very being, and he sustains all things by his powerful word …”

Saint Paul puts it more succinctly when he says Christ is “the image of God” (II Corinthians 4: 4; Colossians 1: 15); the Greek word he uses is εἰκών (eikón, icon). 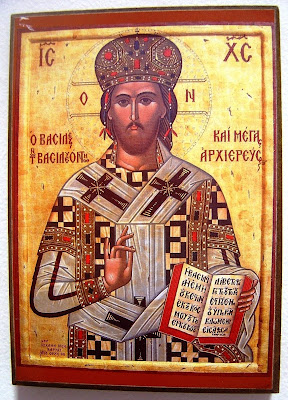 The King of Kings and Great High Priest ... an icon from Mount Athos on the wall of my study (Photograph: Patrick Comerford)

I have five or six icons on the wall of my study above my desk, representing different phases and aspects of my ministry. One is an icon from Mount Athos of Christ, the King of Kings and the Great High Priest, who I hope sets my pattern – who should set the pattern for each and every one of us – in ordained ministry.

We are told in our epistle reading this morning: “Since, then, we have a great high priest who has passed through the heavens, Jesus, the Son of God, let us hold fast to our confession. For we do not have a high priest who is unable to sympathise with our weaknesses, but we have one who in every respect has been tested as we are, yet without sin. Let us therefore approach the throne of grace, so that we may receive mercy and find grace to help in time of need” (Hebrews 4: 14-16).

Christ comes into the world as the King of Kings and as the Great High Priest. But he comes not as the sort of king that we would expect a king to be, nor as a great high priest full of pomp and self-importance, not as a rich young man.

When you have been ordained as priests for a few years, when you have served your first curacy and come to move to your first or second parish as rector, you will be in danger of slipping into habits that you do not realise have been formed slowly and invisibly.

You will be the centre of attention. Nominators who want to attract you to their parish will tell you how wonderful and how talented you are; people will praise your sermons and how well you perform at Christmas and Easter, at baptisms, weddings and funerals.

You may delight in being at the centre of attention; your photographs will appear in the Church of Ireland Gazette beside bishops and in the local newspaper beside mayors and celebrities. You may be interviewed on television and write books that received critical acclaim.

And all in a very good cause, no doubt.

It was in humbling himself as a servant that Christ truly became the role model for all in ordained ministry.

This story of the rich man carries three warnings:

1, As Christ points out, we should be aware of the gap between aspirations and reality as we work out our vocations. In a very penetrating and discerning way, like a sharp, two-edged sword, Christ’s words show the man that he is not really as “Gospel hungry” as his initial words and actions seem to show.

2, It is a warning against the hindrance of riches, which come in a variety of tempting ways, and not just the temptation of money.

3, It is a warning that our vocations can get side-lined and can be betrayed by other priorities, not just the trappings of wealth, but also of power, promotion, priestly privilege, and even the feeling that I am so good that everyone should want me.

Model yourself on Christ, and Christ then will not be hidden from you. When you go forward, he will be there, when you go backward, you will perceive him; you will find him on your left side and on your right (see Job 23: 8-9).

O God,
without you we are not able to please you;
Mercifully grant that your Holy Spirit
may in all things direct and rule our hearts;
through Jesus Christ our Lord.

Canon Patrick Comerford is Lecturer in Anglicanism and Liturgy, the Church of Ireland Theological Institute. This sermon was preached at the Community Eucharist on Sunday 14 October 2012.