How did the banks make an Ass of the nation? 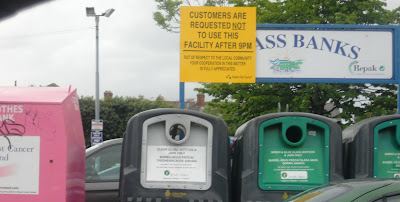 Ireland lost 4-0 to Spain last night. I wonder if our banks were playing the Spanish banks would the result have been the other way around? Or, perhaps, a draw?

I can understand why Ireland was put in the same group as Spain and Italy. But perhaps we could have had some more interesting moments if Portugal, Italy, Ireland, Greece and Spain had been put into one special group.

And if any of the sides in PIGS group played like Ireland did last night, we could have asked Germany to bail us out. Not that that would have done us much good. I remember a common sign in shops when I was a child: “Please do not ask for credit as a refusal often hurts.”

The sign “ASS BANKS” is one I’ve never seen before, though. I saw it as I was passing through Terenure Village this evening.

The sign beside it says: “Customers are requested not to use this facility after 9 pm.” Then, in smaller lettering, it says: “Out of respect to the local community your cooperation in this matter is fully appreciated.”

I suppose customers at banks like these might upset people going into the pubs and restaurants in Terenure after 9 pm.

The former premises of the National Irish Bank across the street have been vacant for the past year.

I wonder what sort of deposits these Ass Banks accept.

And what criteria have they for loans and overdraft facilities?

If I got a big loan, would it look big in one of those grey, green or pink banks?

But then the banks have been treating all of us – indeed, the whole country – as a right lot of asses for the past few years.

Posted by Patrick Comerford at 19:26 No comments: