Coffee and the Book of Common Prayer in the cathedral crypt 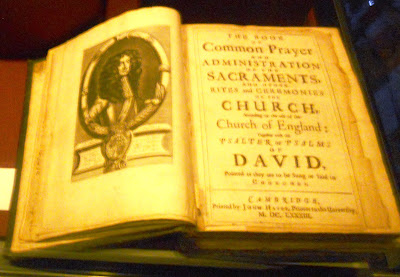 A 1662 edition of the Book of Common Prayer, printed in Cambridge in 1683 ... from the exhibition in Christ Church Cathedral, Dublin (Photograph: Patrick Comerford, 2012)

I acted as deacon at the Choral Eucharist in Christ Church Cathedral, Dublin, this morning, reading the Gospel (Mark 10: 35-45), and assisting with the chalice at the administration of the Holy Communion.

The celebrant was the Canon Precentor, Canon Peter Campion of the King’s Hospital, and the preacher was the Prebendary of Saint Michan’s, Canon David Moynan.

This morning’s setting was the Communion Service in E (Collegium Regale), written by Harold Darke (1888-1976) for the Choir of King’s College Cambridge.

During World War II, Darke briefly deputised for Boris Ord as Director of Music at King’s College, but is more closely identified with the chapel at King’s College because his setting for Christina Rosetti’s In the Bleak Midwinter is sung most years at the service of Nine Lessons and Carols broadcast from King’s College. Some years ago, in a poll of choral experts and choirmasters, it was voted the greatest Christmas carol of all time. A 1714 printing of the 1662 Book of Common Prayer with an engraving showing a beggar with his dog on the steps of a church as two wealthy merchants converse in the portico (Photograph: Patrick Comerford, 2012)

Later, after coffee in the cathedral crypt, I spent some time at the cathedral exhibition, ‘the Word that spake it’, celebrating the 350th anniversary of the publication of the 1662 edition of The Book of Common Prayer.

The exhibition, which opened earlier this month, has been curated by another chapter member, Canon Roy Byrne of Drumcondra. 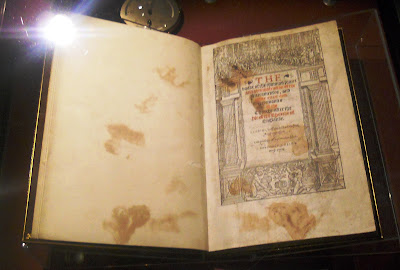 There are prayer books in English, Irish, French, Hindi and Pitman shorthand script. Many are richly decorated and illustrated, and the come from a variety of collections, with many of them now owned by Roy Byrne.

They include prayer books that had been used in the Chapel Royal, Dublin Castle, the two Dublin cathedrals and the Bishops of Meath. The 1683 French edition of The Book of Common Prayer may have been published for Huguenot refugees.

The exhibition continues in the Crypt in Christ Church Cathedral, Dublin, and there is an interesting catalogue to accompany it. 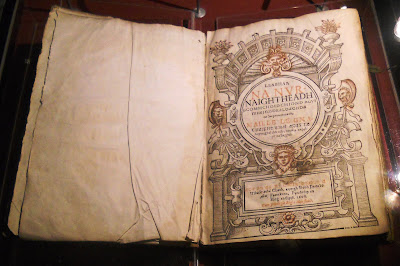 The Book of Common Prayer in the Irish language, published in 1608 (Photograph: Patrick Comerford, 2012)

Posted by Patrick Comerford at 18:53 No comments: